When America acted up against AIDS 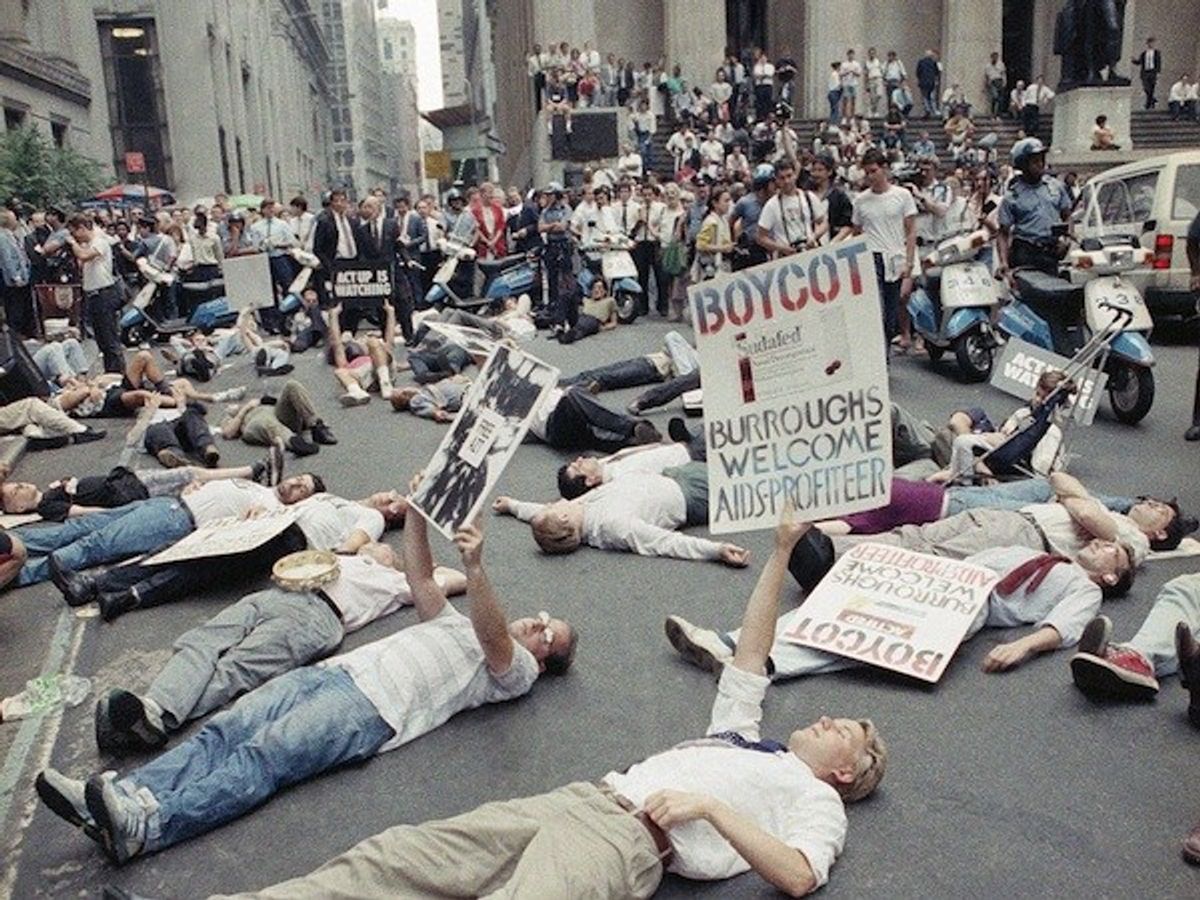 Act Up protestors lie on the street in front of the New York Stock Exchange in a demonstration against the high cost of the AIDS treatment drug AZT in September of 1989.
--

Starting with my inability to believe Mitch McConnell isn't one of Disney's talking teapots gone rogue, there are plenty of good reasons I don't and shouldn't run the zoo. But if I did, "How To Survive A Plague" would be mandatory viewing for Occupy Wall Streeters. First-time director David France's new documentary about the 1987-'93 glory years of ACT UP—aka AIDS Coalition To Unleash Power, in case you've forgotten—is a wrenching remembrance of a gay holocaust that's already dimmer than it should be in our memory. The movie is also an exhilarating portrait of human beings discovering what they're capable of in a crisis. But above all, it's the story of how a never too numerous band of obstreperous activists successfully changed public policy.

On that count, France may gild the lily somewhat. Left out is the groundwork laid from 1982 on by the pioneer AIDS lobby, Gay Men's Health Crisis—co-founded by playwright and veteran thorn in complacency's side Larry Kramer, who moved on to help birth ACT UP once the GMHC proved too apolitical for him. The omission slights how ACT UP's radical bent ended up repositioning other pressure groups as the mainstream version of AIDS-era gay activism, an invaluable lesson in how defining the fringe can help redefine the center.

Even so, ACT UP is the outfit that will rightly end up in the history books, thanks partly to one of the 20th century's great slogans: SILENCE = DEATH. Kramer's the one with his own well-deserved Wikipedia entry, but How to Survive a Plague also introduces or re-introduces us to the likes of Peter Staley—picture Mr. Smith Goes to Washington redone under a death sentence—and Bob Rafsky, whose evolution from glibly committed PR guy to bitter but indomitable combatant in the AIDS wars is the movie's most painful thread. For those of us not familiar with the principals, one agonizing question is who survived. The answers—in modern-day interviews—make us rue the losses even as we thrill to the evidence that this or that alum is still with us.

ACT UP was renowned for the inventiveness and effrontery of its public protests. (The most heartbreaking and impassioned one we see involved demonstrators hurling the ashes of their loved ones over the White House fence.) But its leaders also undertook a massive self-education project that ultimately put them in a position to dicker with the FDA, NIH and pharmaceutical companies as experts, altering research and drug-approval agendas and ensuring representatives of the afflicted community would be included in any decision-making process. The infighting that ended up roiling the group by the early '90s—the agit-prop-oriented street types thought a self-appointed "elite" was getting too cozy with the enemy, leading Staley and others to break off and form a separate lobbying organization called the Treatment Action Group—is a crash course in radicalism's inevitably forking paths, though France may underplay the extremism of some of ACT UP's latter-day kamikazes. He also doesn't acknowledge how much wind was taken out of the group's sails by Bill Clinton's election, which didn't actually lessen the urgency but did make the White House harder to demonize—much as Obama's election turned the left's dissent flabby even as he continued (and sometimes amped up) Bush's war on terror.

Factionalism and decline are pretty much the inevitable third act for any advocacy movement. But in its prime, ACT UP was a model of successful activism without many equivalents in our history. What makes it a uniquely moving one is that so many of the people involved took it for granted they'd be dead soon, and too many of them were right. France's movie is a fitting memorial.