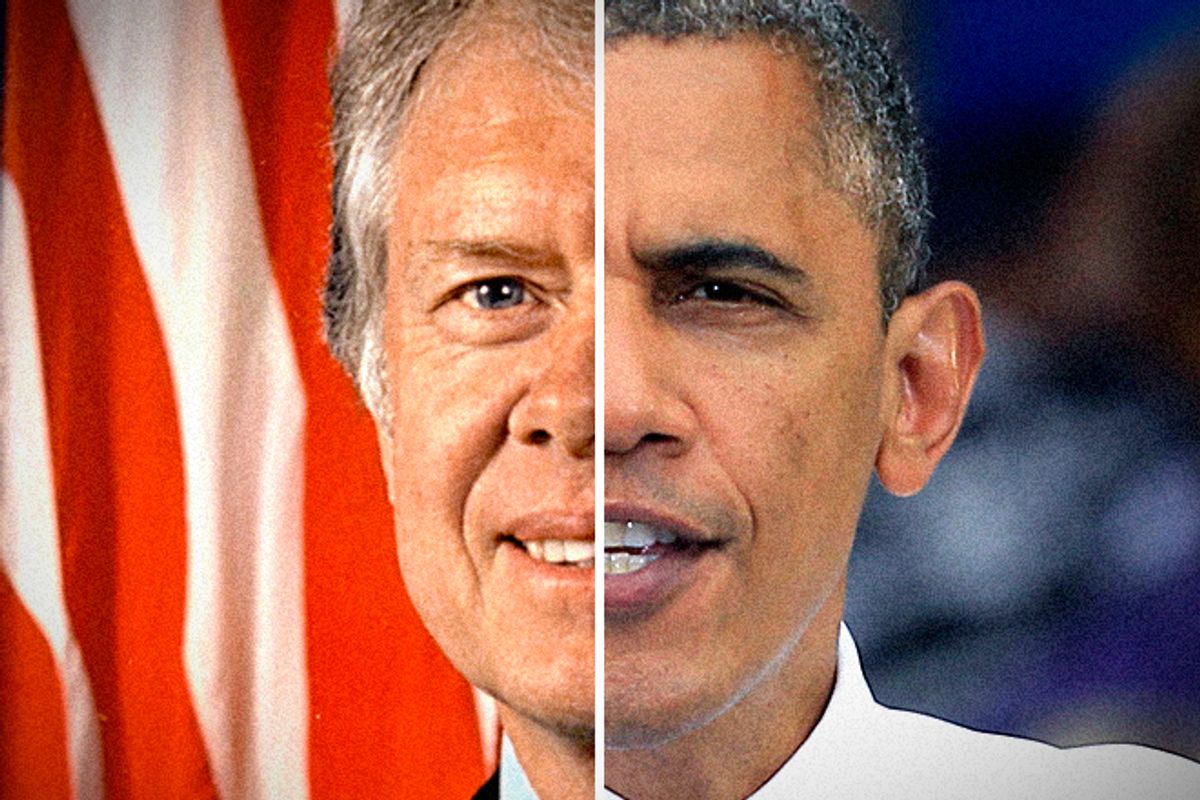 According to a highly reliable source, as Mitt Romney and President Barack Obama prepare for the first presidential debate Wednesday night, top Republican operatives are primed to unleash a new two-pronged offensive that will attack Obama as weak on national security, and will be based, in part, on new intelligence information regarding the attacks in Libya that killed U.S. Ambassador Chris Stevens on Sept. 11.

The source, who has firsthand knowledge of private, high-level conversations in the Romney camp that took place in Washington, D.C., last week, said that at various times the GOP strategists referred to their new operation as the Jimmy Carter Strategy or the October Surprise.

He added that they planned to release what they hoped would be “a bombshell” that would make Libya and Obama’s foreign policy a major issue in the campaign. “My understanding is that they have come up with evidence that the Obama administration had positive intelligence that there was going to be a terrorist attack on the intelligence.”

The source described the Republicans as chortling with glee that the Obama administration “definitely had intel” about the attack before it happened. “Intelligence can be graded in different ways,” he added, “and sometimes A and B don’t get connected. But [the Romney campaign] will try to paint it to look like Obama had advance knowledge of the attack and is weak on terrorism.”

He said they were jubilant about their new strategy and said they intended to portray Obama as a helpless, Jimmy Carter-like president and to equate the tragedy in Libya with President Carter’s failed attempt to rescue American hostages in Iran in 1980. “They are so excited about it,” he said. “Over and over again they talked about how it would be just like Jimmy Carter’s failed raid. They feel it is going to give them a last-minute landslide in the election.”

The source, however, said he was dubious about the tactic. “To me, it is indicative that they have lost touch with a huge portion of the electorate,” he said.

The source declined to reveal the names of the GOP operatives who were present. But he said, “These were the top guys in the party. It was a private, unguarded planning conversation.” He further described participants in the meeting as consisting of well-known names tied to the big Republican super PACs and people who had access to high-level national security intelligence.

“As usual, Karl Rove wasn’t present,” he said, “but some were close to Rove.”

The source said that “there was quite a bit more” to the operation than simply revealing the intelligence regarding Libya. He declined to discuss what he described as the second phase of the operation.

However, already there is evidence that the first phase of the operation is underway. On Wednesday, Sept. 26, on Fox News, Karl Rove called Obama’s reaction to what happened in Libya “inexplicable” and added that Obama is “more intent on campaigning than meeting his responsibilities as commander-in-chief.” He went on to warn that Obama’s policies in Libya endangered the U.S. with regard to Iran. “I am astonished,” Rove said. “We are projecting weakness when we need to be projecting strength.”

Similarly, former New York Mayor Rudolph Giuliani, a one-time GOP presidential hopeful who became known as the mayor of 9/11, followed Rove in criticizing Obama on the attack in Libya.  “This is a deliberate attempt to cover up the truth, from an administration that claimed it wanted to be the most transparent in history,” he told Fox News. “And it's the worst kind of coverup: the kind of coverup that involves our national security. This is a coverup that involves the slaughter of four Americans."

Giuliani added that the Obama White House wanted to dismiss the role played by al-Qaida because it seemed to diminish the triumph of having killed Osama bin Laden. "I think it's because they have this narrative that they defeated al-Qaida,” he said. "They never say the words 'Islamic fundamentalist terrorism'. They want to wish it away. The president was moving on to Asia – he was going to declare this a great victory for himself and unfortunately, this terrible act of terror intervened in their very convenient narrative."

Likewise, Bob Corker, Republican senator from Tennessee, described the administration’s response to "the terrorist attack” in Libya as “bizarre.” And on Sunday, Sept. 30, both Mitt Romney and vice-presidential nominee Paul Ryan joined in the attacks. “I think they want to do their very best to keep the people of America from understanding exactly what happened. We expect candor, we expect transparency, particularly as it relates to terrorism," Romney said.

Added Ryan, “Why is he [Obama] not on the same page with his own administration officials who are saying that this is a terrorist attack? We'll leave it up to you to decide whether it's a coverup or not."

In an apparently related development, early October 1, at 4:45 am, The Daily Beast posted an article asking “why did it take eight days for the administration to acknowledge the 9/11 attacks in Benghazi were acts of terrorism?” The report cited unnamed U.S. intelligence officers who referred to an intercept of monitored communications between members of a local militia in Libya which “suggest the assault was in fact a premeditated attack.”

In addition, a Politico article posted last night said Romney advisers were divided over how aggressively to attack President Obama over his handling of the events in Libya. One unnamed Romney adviser described them as “a huge gift” to the campaign. “Across the board – domestic, economic and foreign-policy issues – President Obama has been outmatched by events,” he said. “He’s an observer of events, not a shaper of events. Everywhere you look, he’s been outmatched.”

But other Romney advisers, led by media strategist Stuart Stevens, wanted to stick to the economy as the central issue. “They’ll tell you that you’ve got to focus people on the fact that their economic prospects are not very good and all that,” the aide told Politico. “Well, Romney’s been trying to do that now since he clinched the nomination at the end of April — and he’s failed. The president is better at deflecting attention from the bad news than Romney is at driving home the impact of the bad news on individual voters.”

UPDATE (11:45 am EST):  A Sunday, September 30 Wall Street Journal article by Romney himself suggests that the Karl Rove faction of Romney’s camp, led by neoconservative foreign policy adviser Dan Senor may have won out. "These developments are not, as President Obama says, mere 'bumps in the road.' “ Romney wrote. “They are major issues that put our security at risk. Yet amid this upheaval, our country seems to be at the mercy of events rather than shaping them."

Coming just days before the presidential debates, which most observers thought would be focused on the state of the economy, Romney’s article strongly suggests he may well turn the subject to Libya.