Will Mitt run on torture?

His advisers want him to bring waterboarding back. Challenging Obama on torture might be his debate surprise 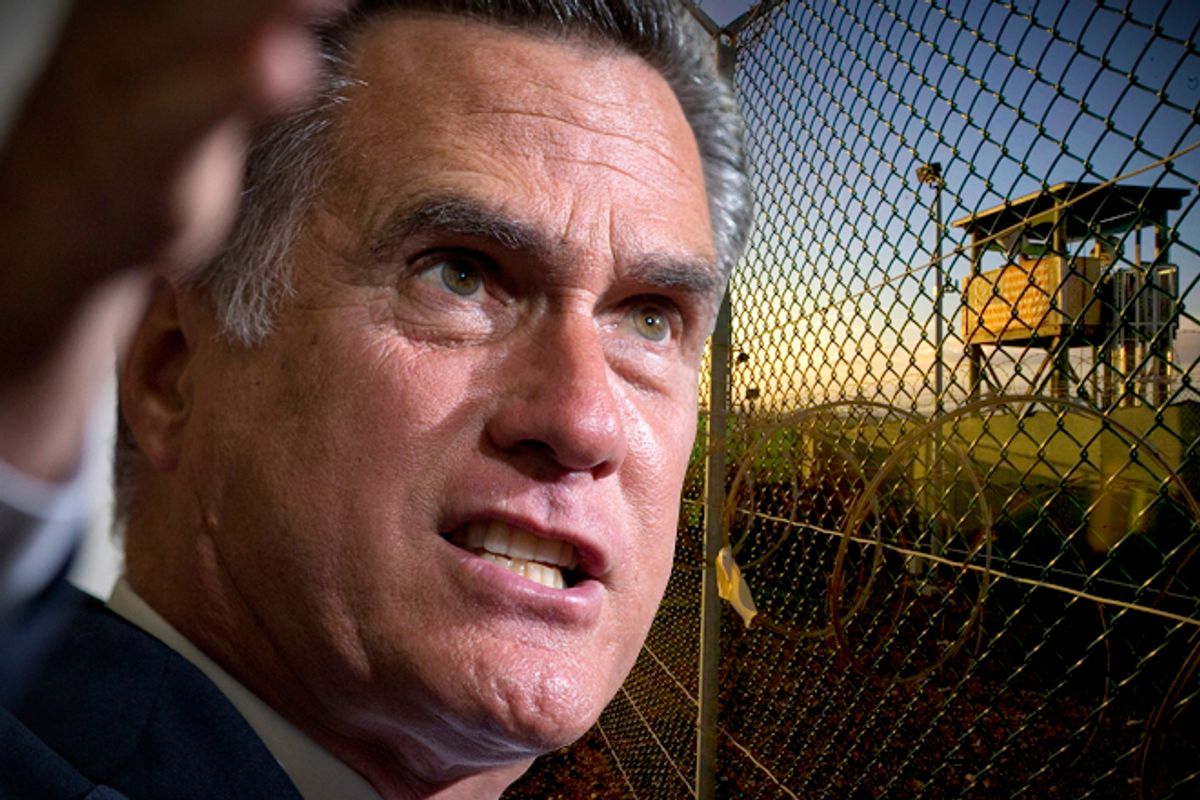 It seems likely that a President Mitt Romney would rescind the executive order issued by President Barack Obama outlawing torture. His own policy advisers have told him to do so, according to a memo obtained by the New York Times. (Mitt Romney's advisers are doing everything they can to encourage the liberal debate over the morality of supporting Obama in the face of his miserable civil liberties record.)

The memo was drafted last year by the Romney campaign's "national security law subcommittee," which is made up of 18 lawyers, 15 of whom are George W. Bush administration veterans. The lawyers call on Romney to "rescind and replace" the executive order banning torture and once again allow "enhanced interrogation techniques." The lawyers also recommend that Romney first make a show of ordering a "review" of torture policy to help make the candidate look "open-minded and empirically driven." (Jesus Christ.)

Romney's been pretty consistently -- but very vaguely -- pro-torture. Like many other Republicans, he believes that America should torture but not admit that the techniques it uses to "interrogate" prisoners count as torture. Romney does not consider waterboarding torture. But he believes in vagueness above all else, as you can see in this exchange between Romney and torture survivor John McCain in 2007:

Romney's vagueness when directly asked about torture is understandable -- he won't even go into details on tax policy -- but Conor Friedersdorf would like to see him nailed down on the issue, perhaps even by debate moderator Jim Lehrer.

There's a chance, though, that he won't have to be bullied into answering the question. Romney might cheerfully volunteer the information.

Is Romney planning surprises for the debates? He probably should be, if only to try and goad the press into running with a "Romney comeback" storyline for a few days. Thus far he's shown no compunction about attempting to play the old "soft on terror" card against Obama, and I imagine his advisers think the president is more vulnerable on the subject than he appears, especially in the wake of the deadly attack on the American consulate on Libya. In 2009, remember, Romney thought this would be a foreign policy election, and his "Obama apologizes for America" line is the one consistent message -- incoherent and dishonest though it may be -- of his entire campaign.

I think there's a decent chance Romney will wholeheartedly embrace torturing the hell out of terrorists (and suspected terrorists and dudes who look like terrorists) at one of the upcoming debates.

One reason for that: Americans are more accepting of torture now than they were when America was doing it.

In an October 2007 Rasmussen poll, 27 percent of Americans surveyed said the United States should torture prisoners captured in the fight against terrorism, while 53 percent said it should not. In my YouGov poll, 41 percent said they would be willing to use torture -- a gain of 14 points -- while 34 percent would not, a decline of 19 points.

It gets worse: More Americans also support specific torture techniques, including waterboarding, than did in 2005. (Bush's favorable ratings are gradually rising, too.) It's not a large number of Americans who have suddenly come around on torturing prisoners, but Romney's looking for any advantage he can get, and he's shameless. Romney has likely already decided to bring torture back once he's in office, so the only calculation is between waiting until he's won to announce it or trying to use it for political advantage now.

And honestly, as awful as campaign coverage of the ensuing torture "debate" would be, it would at least draw into the open what the Republican Party has so far been oddly quiet about: That the next Republican president will almost certainly bring torture back, because Bush made it GOP policy.