"Beasts of the Southern Wild" wasn't shafted by SAG 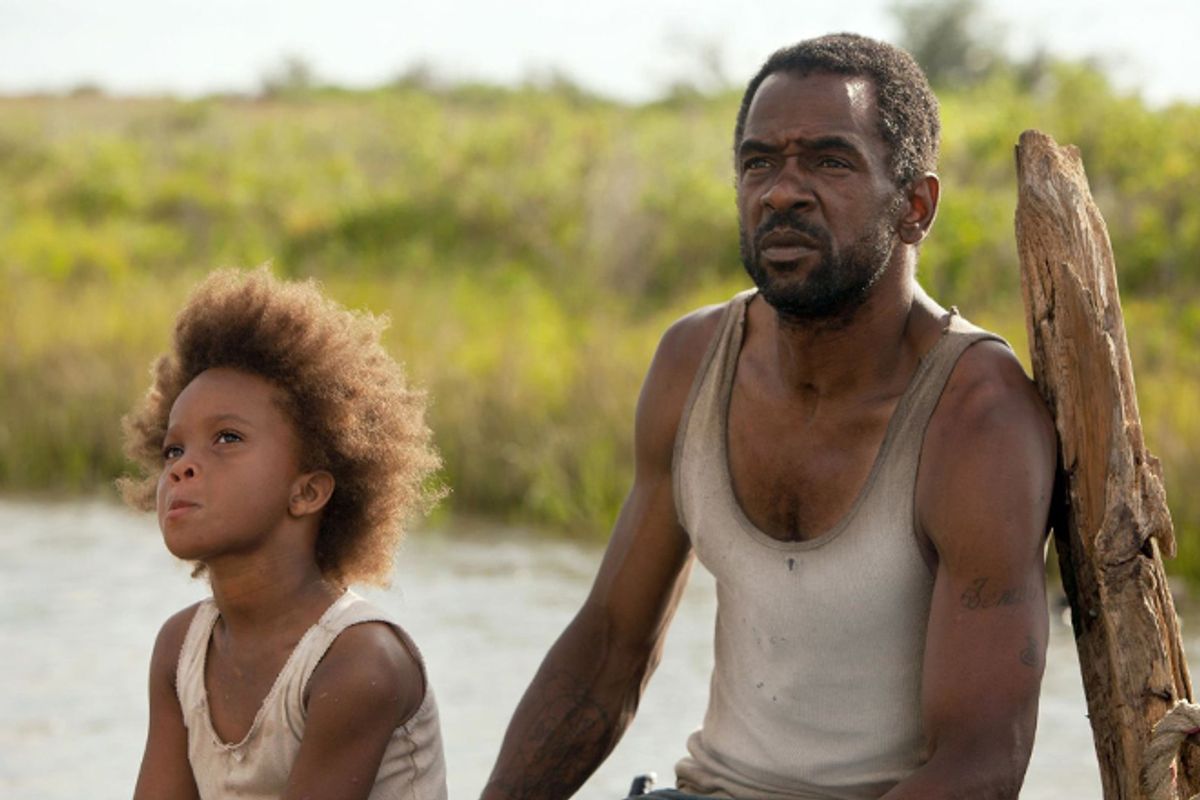 Quvenzhané Wallis and Dwight Henry in "Beasts of the Southern Wild."
--

"Beasts of the Southern Wild" — an innovative, imaginative and deeply moving drama with some of the most natural and affecting performances to come along in years — is easily one of the best films of the year. So the announcement, on Monday, that it would be ineligible for the 2012 Screen Actors Guild Awards came as a complete surprise. As the Hollywood Reporter revealed, director Benh Zeitlin's $1.3 million budget Gulf Coast tale of a little girl and her father relied on a local cast of unknown, non-professional actors — including the ferociously brilliant Quvenzhané Wallis — who are not SAG members. And so, despite winning Sundance's Grand Jury Prize and Cannes' Caméra d'Or, and being poised to be a shoo-in at the Academy Awards and Golden Globes at nomination time, the film will not be eligible for individual or ensemble SAG Awards.

That a movie so lauded would not even be nominated for one of the film industry's major honors came as a shock to some. Awards Daily promptly declared that "Beasts" had been "shafted." But failing to meet an award's criteria isn't really a shafting, nor is the ineligibility really the fault of the creative team. On Monday, SAG-AFTRA spokesperson Pam Greenwalt told TheWrap that, "We're baffled at the fact that the producers of 'Beasts of the Southern Wild' failed to sign a SAG-AFTRA agreement as every other important film released this year did and which they can do as well." Fox Searchlight, the distributor that picked up the movie, has until Oct. 25 to retroactively cover it, which would entail paying the actors the SAG scale day rate, "a little over $500." It sounds unlikely they will, though. Searchlight presidents Stephen Gilula and Nancy Utley released a vague statement Monday: "We appreciate and honor the spirit in which the film was produced and the way it was made. It's truly an original."

It's doubtful that Fox Searchlight couldn't, if it really wanted to, cough up a few bucks to help get its prestigious film a crack at some major awards. But what's interesting in all of this is the question of whether or not it should. As "Beasts" stands now, it's an amazing, beautiful movie that just happens to have been made outside of the parameters for the SAG awards. That's all. Other notable films have, for various reasons, been left out of the lists for accolades too. Nearly 20 years ago, Uruguay's first Academy Award contender, "A Place in the World," was disqualified from competition because of the film's Argentine crew. In 1998, the nifty Clive Owen drama "Croupier" was shut out from Academy Award contention because it had been shown in Singapore the year before its American release. "The Dark Knight" score couldn't get an Oscar nod because of the number of credited composers. And last year, there was debate over whether the British documentary "Senna," culled entirely from television footage, would qualify for Oscar contention. (It did, and it failed to win a nomination anyway.)

Further, as the Hollywood Reporter notes, plenty of performances that were perfectly well qualified for SAG nominations and didn't get them have gone on to secure Oscar nominations, including those by stars like Sean Penn, Javier Bardem, Julie Christie and Laura Linney.

Sure, prizes are nice. And more significantly, they can dramatically affect the box-office take for a film and future prospects for the cast and filmmakers. But if you make a non-SAG movie, it's not going to get nominated for a SAG award any more than a regional play is going to get nominated for a Tony. It's not a shafting or an outrage or a snub. Nor does it in any way diminish the greatness of a film — one made with an 8-year-old leading lady on a budget that would likely have bought one special effect in "Avatar." And if by Oct. 25, Fox Searchlight has still decided not to try to win it a SAG, there can be little doubt the Oscars will be along soon enough to pick up the slack.