This year it's Joe Biden, but the press used to love Rummy 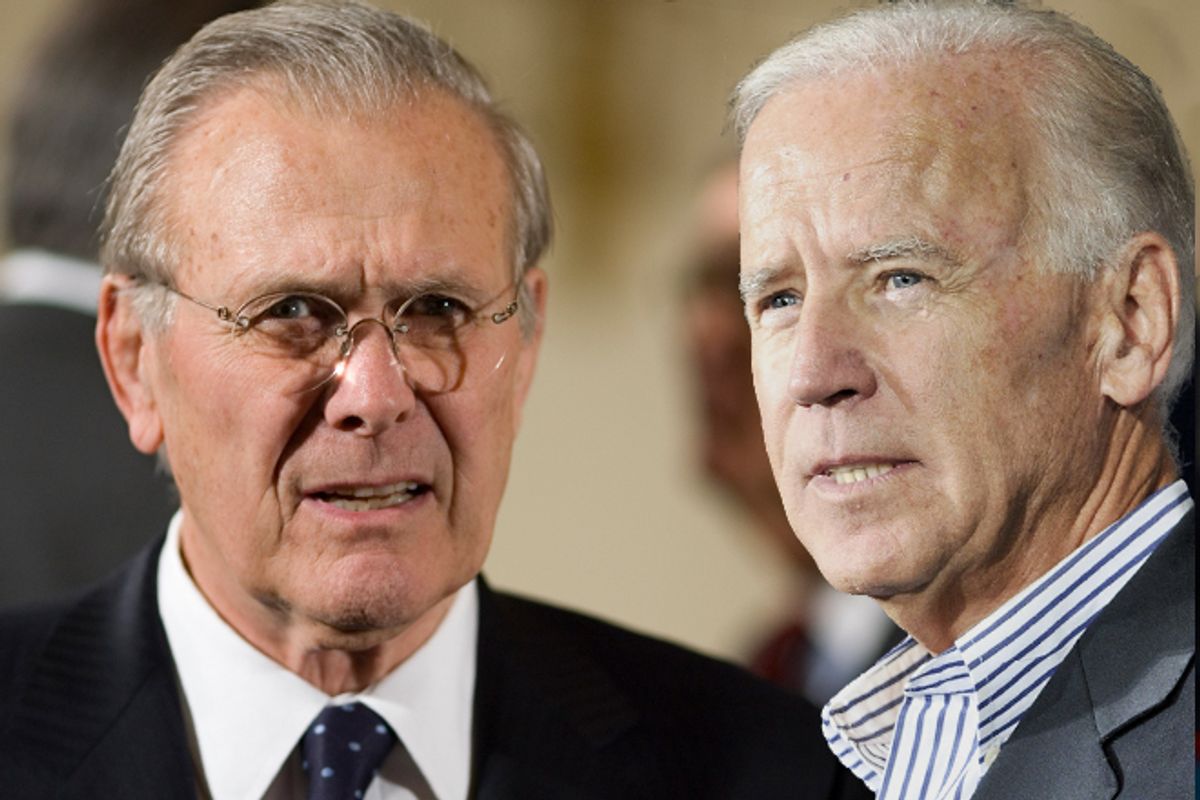 Politico has a silly piece today about how Joe Biden, America's wacky vice president, is a "sex symbol," or at least he likes to flirt with ladies on the campaign trail, like lots of personally charismatic politicians do. It is an intentionally silly, jokey story, which is fine, let people have their fun I say. But, ha ha, the conservatives don't care for this "Joe Biden is sexy" nonsense, no sir.

At the Weekly Standard, Daniel Halper gets very sarcastic with Politico, as does the Weasel Zipper person. Conservatives on Twitter are similarly unimpressed. The "Fox Nation" headline: "Left-Wing Politico Calls Biden a 'Sex Symbol.'"

Do you want to see something funny? This is an actual real-life, unretouched National Review cover from 2001. Yes, that is a weird caricature of a "sexy" big-headed Donald Rumsfeld. And yes, the headline does refer to him as "the stud." And a "pin-up." Also the actual cover story refers to Rumsfeld as "SexDef" and it is hilarious:

Rumsfeld is definitely the man of the hour, a classic American type returned to do a hard duty. He is direct, decent, and clear. It doesn't hurt him, either, that he is, indeed, a "handsome Joe," as my grandmother would say. Rumsfeld is this war's pin-up, its Betty Grable.

In her book, Decter concludes that Rumsfeld’s secret is “manliness” (italics hers), a quality that in her estimation has something to do with being a grandfather and something to do with prairies. But, unfortunately for the reputation of her subject, the tone of the book is anything but manly. She blows him warm kisses (“He works standing up at a tall writing table, as if energy, or perhaps determination, might begin to leak away from too much sitting down”), and warmer ones (“this was the stuff—no other word would do—of glamour”), and even warmer ones (“Oh, Rumsfeld,” a friend coos, “I just love the man!”), until poor Rumsfeld begins to melt.

It was all extremely embarrassing . Oh, and then there was the stuff about how hot the president was, in his silly airplane flying Halloween costume. And unlike the Politico story, no one was joking. And then everyone just sort of forgot about it, forever, that weird couple of years when the liberal media kept insisting that all American ladies wanted to sex hot Republican war dads. Anyway, ew, Joe Biden, gross, etc.