How Scott Brown blew it 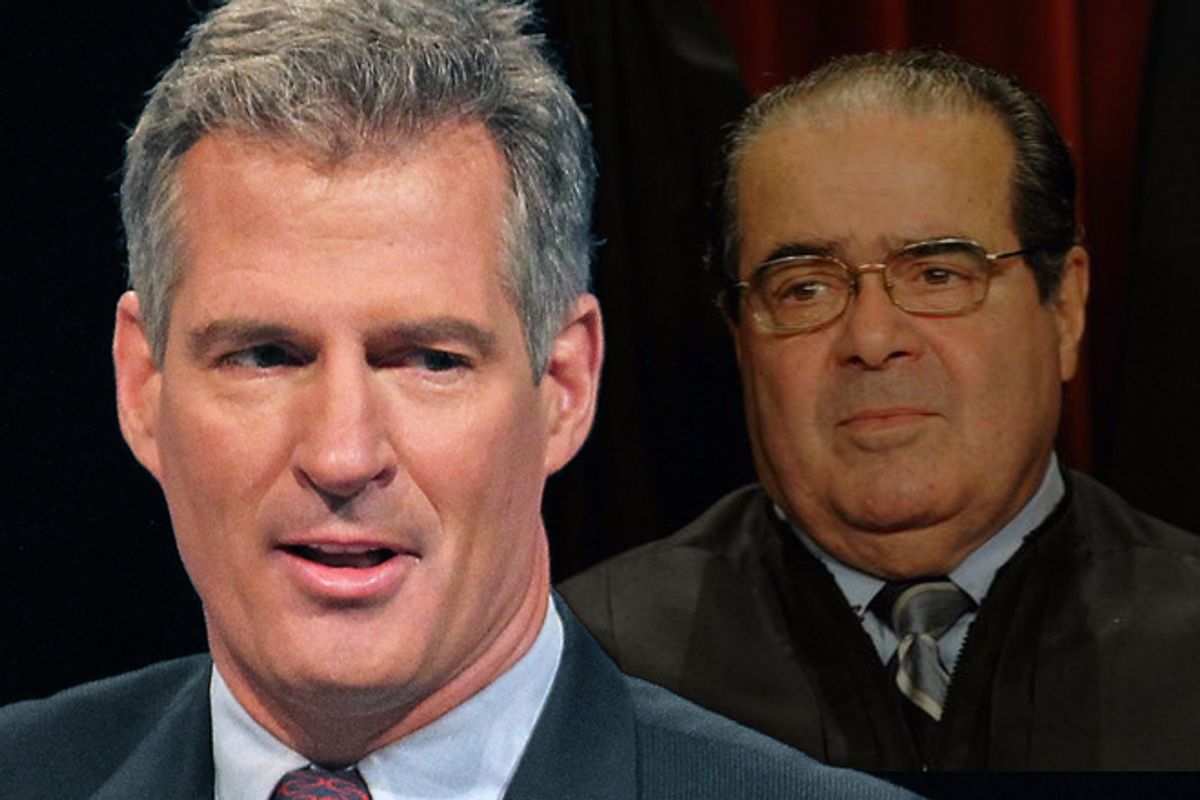 What was Scott Brown thinking? When David Gregory asked him a predictable question about his "model" Supreme Court justice, he had plenty of options. Literally 112, to be precise. But he answered "Justice Scalia" – and by choosing the far-right lightning rod, he just may have lost the election in that moment.

Elizabeth Warren's campaign holds a slight lead, but her surest path to victory is reminding Massachusetts voters that they're Democrats. The state where Barack Obama leads Mitt Romney 60-32 percent in the latest WBUR poll shouldn't be sending a Republican senator to Washington to thwart the president. Scott Brown knows this, which is why he described himself as "independent" so many times Monday night. But given the chance to show real independence, he told Gregory that his model Supreme Court justice was the right-wing Antonin Scalia – and thus reminded voters of what may be the best reason to elect Warren.  The crowd's loud boos let Brown know he made a mistake, and he began scrambling to name other justices, but the damage was done.

If Brown wanted to pick a Republican, he had plenty of choices. The GOP California governor who became chief justice, Earl Warren, ultimately came to be seen as a traitor to conservatism for his rulings on school integration and the rights of the accused. But the number of people who remember that is fading, and he might have been the kind of bold, bipartisan pick a supposedly independent Massachusetts senator would get behind. Or maybe Sandra Day O'Connor, the first female justice, who happened to be appointed by a Republican, Ronald Reagan, might have been a smart political choice in a race against a woman candidate. Or Massachusetts' own Oliver Wendell Holmes, appointed by Republican Theodore Roosevelt. (Felix Frankfurter, another native son but appointed by the Democratic Roosevelt, was probably too risky.) Warren picked a Massachusetts daughter, Elena Kagan, her former Harvard colleague.

Why would Brown pick Scalia? Was he pandering to the tiny Tea Party vote? Or just under-prepared? It's probably one of the most predictable questions in a Senate debate. Maybe he just likes the guy who made George W. Bush president and made corporations people (in Citizens United) but who believes 14thAmendment equal protection provisions don't apply to females.

It was a foolish move that seemed to come from Brown's cockiness. He's clearly on the offensive with Warren, not only hitting her hard, again, about her claim to Native American ancestry, but also intensifying his effort to make her look schoolmarmy. This time, he didn't just call her professor, but when she interrupted him, he shot back, “Excuse me, I’m not a student in your classroom, please let me respond.” Interestingly, he jabbed his opponent Martha Coakley in a similar way in 2010, telling the attorney general that he wasn't a defendant in her courtroom. He seems to be good at channeling male anxiety about powerful women.

But he also comes off as something of a jerk. Later, when they were asked to say something nice about one another, Warren praised Brown's family as well as his vote to repeal "don't ask, don't tell." Brown used it as just another chance to zing Warren, calling her "a very hardworking, accomplished professor – and I'm going to work very hard to make sure she stays there."

Warren may not stay there after Brown's performance last night. Look for Warren ads featuring Brown blurting out "Scalia" as his "model" justice in the days to come.