I hope my dogs die soon

My pets have long been the center of my world. As my two pugs struggle, I wonder: How much longer can this go on? 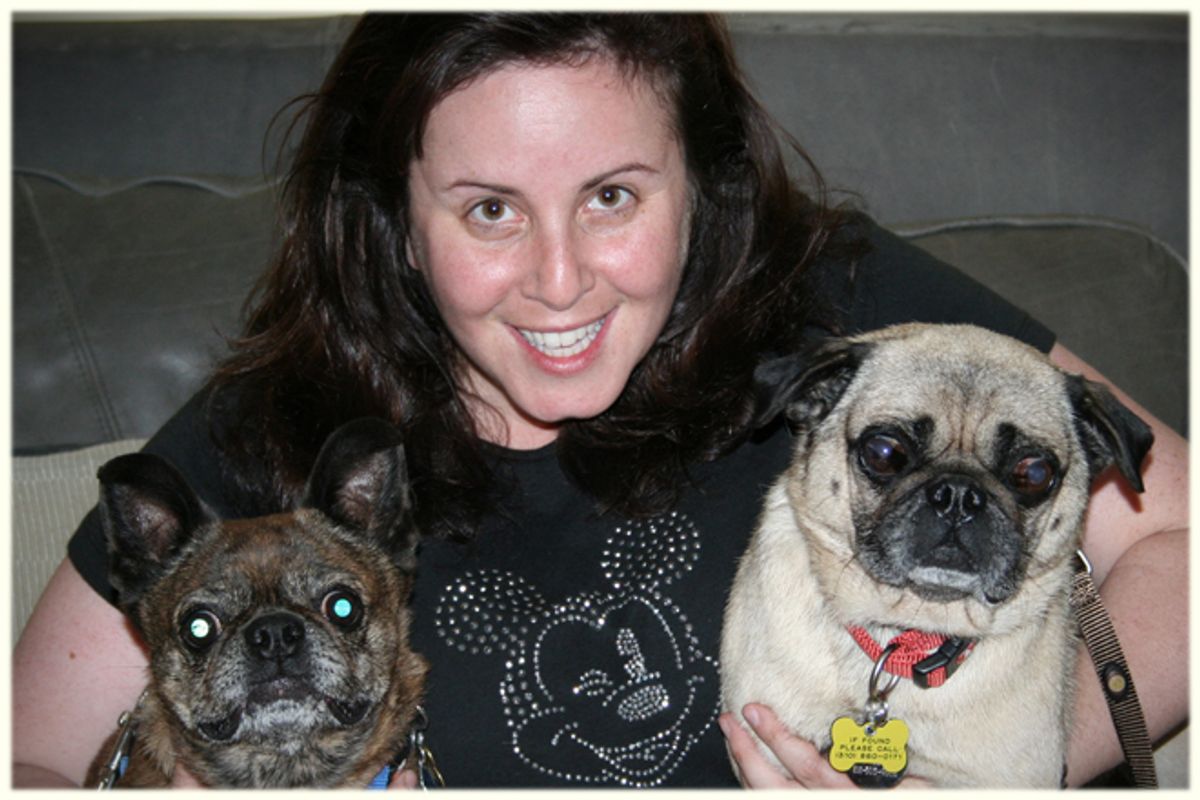 A photo of the author with her dogs. (Unknown)
--

The emergency room veterinarian recommended a pancreatitis test for my 9-year-old pug. I frowned at the $800 estimate, but this is the cost of doing business at 4 a.m. It wasn’t the first time I had spent the night in an animal hospital with a dog in distress. In the four years since I adopted Clarence from a pet rescue group, his list of ailments included epilepsy, arthritis and skin growths in places you’d rather not look. None of his maladies are fatal, but they require X-rays, medications and special diets.

Meanwhile, I have another dog enduring the indignities of what his veterinarian calls “the slow fade.” Both suffer grand mal seizures. Both have fragile stomachs that cause indoor accidents and sleepless nights. And both teeter on the edge of death one moment only to act like spry pups the next.

For more than half of my adult life, I have scheduled my world around my pets. But I don’t know how much longer this can go on. As much as it pains me to admit it, part of me is anxious for their anguish — and mine — to end. I can’t wait for them to die.

I fantasize about being free from the burden of caring for them. I relish the thought of clean carpet and a home that doesn’t reek of urine and impulsive weekend trips taken without anxiety over their well-being. I think of the money I could save if I didn’t have to pay for their exorbitant medical costs. And then guilt overwhelms me as I continue to grapple with the question: How far is too far to go to save your pets?

Hoping for some clarity on this question, I reached out to veterinarians, animal behaviorists and a psychologist who specializes in pet loss bereavement. I tracked down a woman who started a hospice foundation for household animals. I wanted them to tell me what to do, but they all told me the same thing: The decision about when to let my dogs go was entirely up to me.

And I hate that. I am so bad at making major decisions. I don’t like the pressure. There’s a reason why I never became a doctor or a sniper. And there’s a reason why I’m single and childless. After coping with my father’s illnesses for many years, I was determined to avoid the same grim and unceasing responsibility my mother endured for so long. And yet, here I am.

During my childhood, our family dogs came from local shelters and lived extraordinarily long lives. All of our pooches, from Levy the cockapoo to Winthorpe the Great Dane, aged slowly and declined rapidly. It seemed to me that my mother always knew when it was humane to euthanize them. Maybe this is just a typical child’s perspective.

But our culture has altered its attitude toward domestic animals. A generation ago, if the family pet became seriously ill or displayed aggression, you put him to sleep or gave him away. Back in the early '90s, my brother had a friend who returned home from college to discover that his mom had put down their old dogs because she was fed up with them peeing all over the house. You won’t see that happen on Cesar Milan’s show. These days, pet owners are expected to exhaust every treatment, resource or training option to make their furry companion right again.

Of course, I’m part of the problem. I anthropomorphize my pets, dressing them in Halloween costumes and pretending that they speak English in the kooky accents I provide. And I am vigilant about their care. They have been to the doctor, even for simple wellness exams when they were younger and healthier, far more than I have.

So how did I become the Florence Nightingale of flat-faced dogs? Three weeks after my father’s death in 2000, I adopted a mutt from a woman who rescues Boston terriers. He had the breed’s quintessential smashed face, tulip-shaped ears and a brindled coat. I brought him to his new home in Las Vegas and renamed him Mookie as an homage to my dead dad, who hurled the word “mook” as an epithet toward anyone who irritated him. One of my cousins said it looked like Mookie had run into a door going 150 miles per hour. But his spirit compensated for his appearance. He adored all people. One time, at the community mailbox, he leapt in through the open window of a parked car and slurped kisses on a (thankfully delighted) stranger.

By the time I relocated to Southern California for a new job, I thought Mookie needed a companion during the long days by himself. So I adopted Yogi from a pug rescue group. Six months after he moved in, he whimpered and lost interest in his food. Then I felt the hard lumps in his neck and hind legs, the sure signs of lymphoma.

I rationalized all over the place. Yogi was only about 5 years old. He had so much more living to do. How could I give up on this adorable pillow hog who ignored the dog beds I provided, preferring to press his wrinkled face into my neck as we slept? So I whipped out my credit card and rearranged my work schedule around his chemo sessions, splitting shifts and driving 60 miles roundtrip in gridlock every week to get him the help he needed to survive. It satiated my ego to think that my love, effort and considerable financial sacrifice kept him going.

I kept him alive, and now it was my job to help him die. This can be said of most pet owners eventually because most of us will outlive our animals. It’s the natural order of things. But the animals can’t tell you what they want. It’s agonizing.

After Yogi’s cancer returned, I sat with him on a couch while the veterinary oncologist injected two shots, one to make him unconscious and another to stop his heart. He had a fatal disease that was causing him pain. I hated to lose him, but the decision was easy. I did not realize then how much anguish he had spared me simply by giving me a clear choice.

Delirious with grief after Yogi’s death, I continued to push my luck. I found another rescue organization and adopted Clarence. It didn’t take long before I realized he had a plethora of problems, too. And then Mookie’s health started to decline, as well. The only thing worse than the seizures they suffer are the side effects of the medications they take to quell them.

This wasn’t supposed to happen to me. Where was the joyful, reduced-stress life that the National Institutes of Health says comes with owning pets? My dad suffered from just about every medical trauma imaginable, including diabetes, cancer and blocked carotid arteries. He had open-heart surgery and a complicated liver transplant. Yet I kept creating my own hell. I thought I was so smart to avoid the kind of excruciating pain that human relationships could cause. I never imagined I would lock myself in an even lonelier box. I did not know what to do, and no one could tell me, especially not my closest companions. I may give my dogs pretend voices, but I know I’m simply talking to myself.

The E.R. doctor diagnosed Clarence with pancreatitis. I refused hospitalization and asked the veterinarian to provide me with medications to keep him comfortable. She argued that he could die, but I wouldn’t budge. So she reluctantly sent us home with drugs. Much to my horror, his survival disappointed me. I hadn’t realized how desperate I’d become.

I still have good moments with Mookie and Clarence. Their energy is low, but they still snuggle into my sides and snort with approval when I kiss their smashed faces in a way that soothes my worried soul. One veterinarian told me that if they cannot move or recognize me, then I will need to let them go. I was grateful to hear that: a clear directive.

Until then, I continue to give my credit card to the vet, and I continue to endure the disruption of my circadian rhythms. There is no monetary value that can be placed on a beloved pet. I hope that moment comes, and I know it will hurt, more than I even want to imagine, just the way it did when my father finally succumbed to his illnesses. But still, I wish for it. To know in my heart when it’s time.