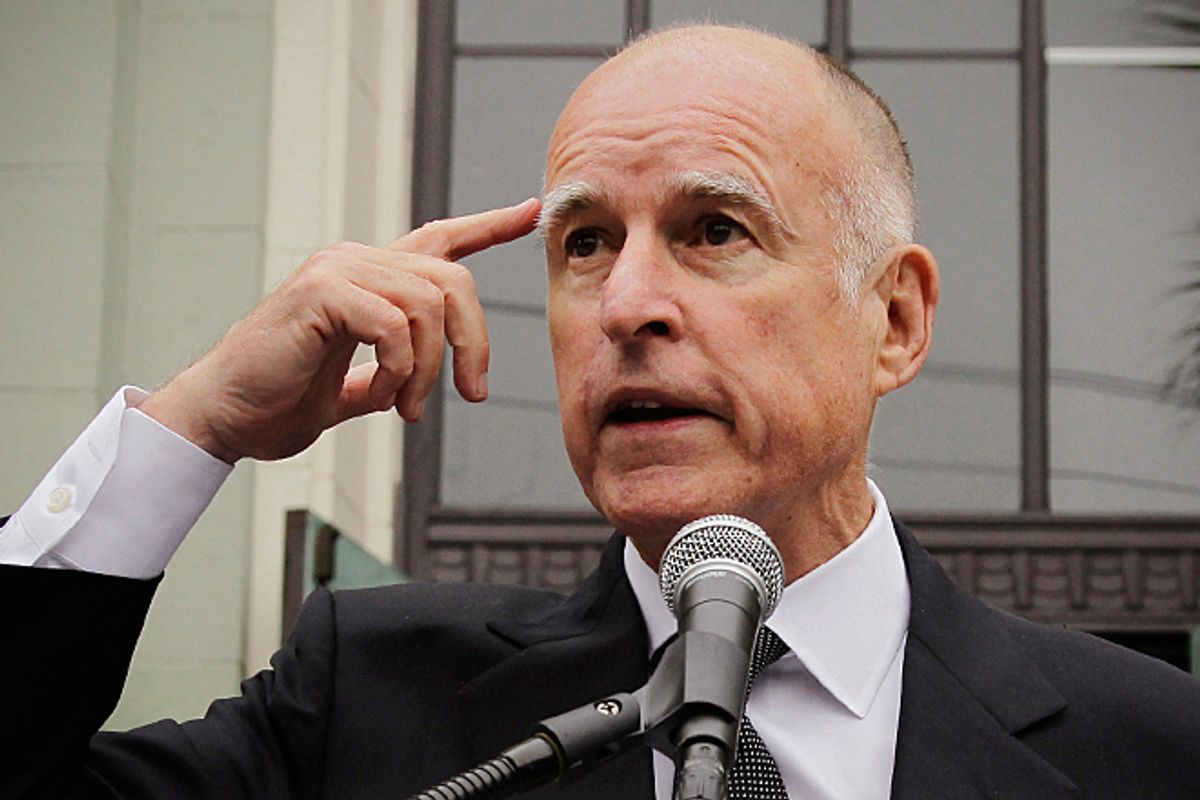 To borrow the old adage, with Democrats like Jerry Brown, who needs Republicans?

After all, the former mayor of the so-called People’s Republic of Oakland and now-repeat governor of California, was called “more of a fiscal conservative than Governor Reagan” by American Conservative magazine and pilloried in a Dead Kennedy’s song as a “hippie-fascist.”  And now Gov. Brown has vetoed the Domestic Worker Bill of Rights, which would grant basic labor and wage protections to 200,000 nannies, housekeepers and home-health aides in the state.

Across the country, though voters are increasingly divided into increasingly fervent red-versus-blue camps, many Democratic leaders and candidates are little better than Brown.  Take Sen. Joe Manchin, D-W.Va., who, when he ran for his seat in 2010, cut a TV commercial where he fired a rifle through his party’s signature environmental legislation.  Or Sen. Claire McCaskill, D-Mo., who was the only Democrat in 2011 to vote against a spending bill to keep the government operating until the following fall.

And it was a Democratic mayor in Chicago that tried to crush the teachers' union and push a privatization agenda on public education, and a Democratic governor in New York who gutted public-sector employee pensions.

In other words, while Republicans are stiffening their collective spine and achieving greater (albeit increasingly extreme) ideological cohesion, Democrats remain the party committed to getting in office and not really doing anything powerful once there.

Of course, this is a big part of the reason why progressive voters are frustrated with President Obama.  He passed landmark healthcare reform legislation, but his plan relied on strengthening private insurance companies instead of creating a competing, public option.  Obama passed a stimulus bill to reenergize the economy, but it was small compared to the scale of need — and most of the spending was on tax cuts, not job creation and public works.

And we can expect, at this week’s first presidential debate, focused on domestic policy, that President Obama will be tripping over himself trying to seem more of an anti-deficit hawk than his Republican opponent.

The reality is that, whether it’s because we’re chronically pessimistic or used to being marginalized or uncomfortable losing in the short term to win down the road, the Democratic rank-and-file continue to let our party stray toward the center.  While the Tea Party has exacted revenge even against any Republican who dares work in a bipartisan fashion on mainstream legislation, Democrats can barely get their candidates to stop bashing their own party in public let alone vote in support of a liberal agenda.  Yet conservative Republicans have been willing to elect extremist nut jobs in primaries who have no chance of winning in the general election (see, for example, Christine O’Donnell, Sharron Angle, Todd Akin) because they’re willing to play the long game.  And watching the Republican mainstream move steadily to the right on everything from shutting down the federal government to shutting down Planned Parenthood and, well, shutting down everything in between, the success of that patient but principled strategy is evident.

Earlier this year, two centrist Democratic members of the House of Representatives were defeated by more liberal candidates in Pennsylvania primaries, because the incumbents — Jason Altmire and Tim Holden — had opposed healthcare reform and climate change legislation.   And the new, more liberal candidates seem likely to pull off victories (if Pennsylvania’s new voter disenfranchisement laws don’t stop them).  And in Massachusetts, the innovative Progressive Campaign Change Committee effectively drafted Elizabeth Warren to run for the Senate and has been backing her very strong and very progressive campaign.  So being both principled and victorious as Democrats is possible.  It’s just not that common.

While the conservative base's barking against Mitt Romney is so loud you could strap them on the top of a car and still hear the yelling, progressive irritation with President Obama and the likes of McCaskill, Manchin, Brown and many others is often repressed until after the election.  Too much is at stake, we reason.  We can’t risk helping elect Republicans.  Which is, of course, always true — and therefore always wielded like a threat above our heads, keeping us compliant.  I’m not saying there’s anything structural we can do at this point about this election, so let's all get out there and put on our blue shirts and hats and knock on doors and cheer for the Democrats.  But on Nov. 7, progressives should do some soul searching about why we don’t command respect from the Democratic Party — and how we’re going to change that.