And if Romney loses the debate...

We keep hearing that it's make-or-break in Denver for the GOP nominee. So what happens if he flops? 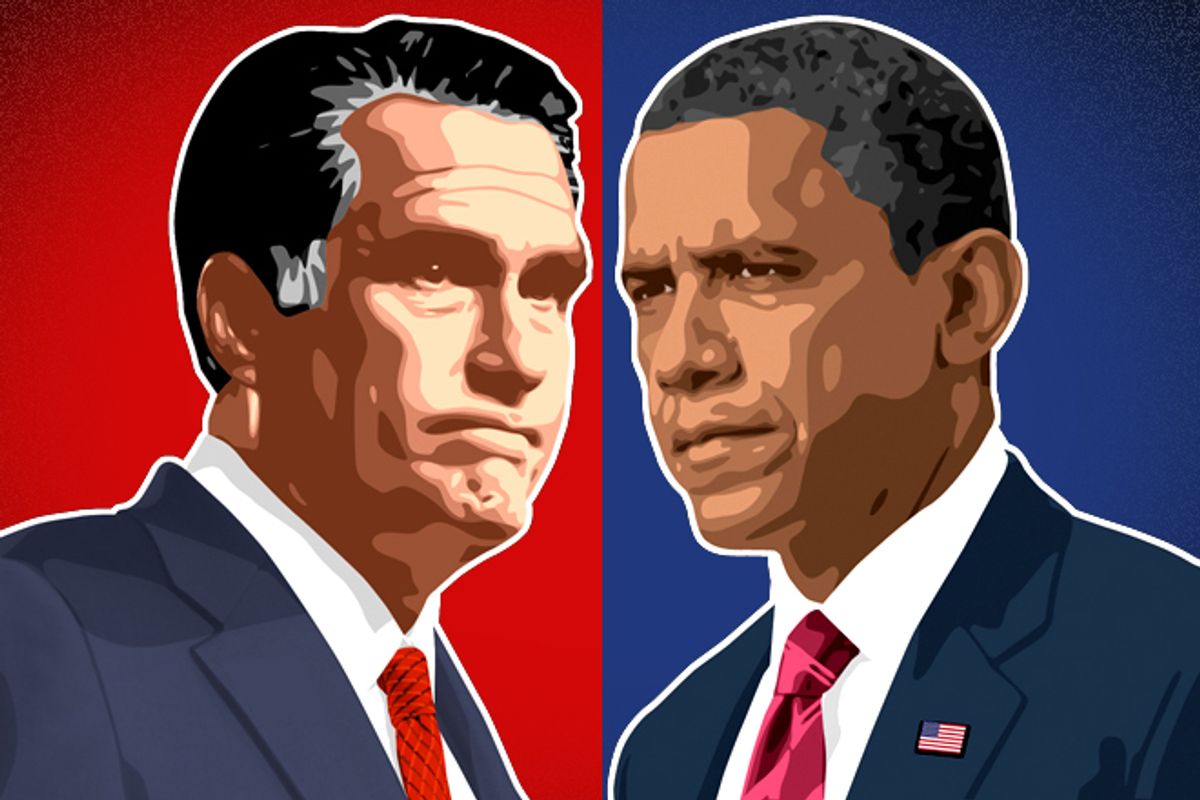 Mitt Romney, we keep hearing, faces a do-or-die 90-minute test when he joins Barack Obama onstage tonight. After all, he’s trailed the president in polling all year, save for a few days around the Republican convention when he managed to pull into a statistical tie, and time is running short.

But the Denver debate holds at least the potential to function as one big reset button for Romney. A command performance, aided by an underwhelming presentation by Obama, could lift his poll numbers, alter the Romney-as-inevitable loser media narrative that’s taken hold, and generally wipe away much of the misery that defined his September.

They won’t say it loudly, but Romney’s team is hoping to replicate what John Kerry did at the end of September 2004, when he won rave reviews for his debate performance and almost overnight closed most of what had been a 6-to-8 point gap against George W. Bush. Kerry, obviously, didn’t go on to win on Election Day, but that debate altered the way the media – and his own party – treated his candidacy and gave him a fighting shot.

In hindsight, it was easy to see Kerry’s debate triumph coming. In the standard pre-debate expectations posturing, Bush’s team had claimed that, as a rhetorician, Kerry was Cicero’s heir. But no one really bought it, since by that point an image of Kerry as a lousy candidate with self-destructive tendencies had taken hold. But Kerry really was – and is – very strong in debate settings. Factor in the low expectations and Bush’s unfocused performance and it was a perfect setup for Kerry to catch the press and the public by surprise.

The expectations are just as low for Romney – polls show that voters by a 2-to-1 margin expect Obama to win the debate – although it’s harder to see him posting the same kind of breakthrough that Kerry did. For one thing, he’s not as savvy a debater, but the bigger problem is how constrained by his party Romney is in what he can say. Nevertheless, he showed during the GOP primaries (and, for that matter, during his 2002 Massachusetts gubernatorial campaign against Shannon O’Brien) that he can deliver a sharp and polished indictment of his opponents – especially when he’s had time to prepare. A clear Romney win – and, with it, a major shift in how the media portrays him and this race – is not out of the question.

But it’s also not out of the question that he’ll fail to emerge with any new credibility – or even that he’ll lay an egg and find himself in an even worse position. The question if that happens is: What then?

Obviously, Romney would pay a price in negative media coverage, with the press fixating on his missed opportunity and treating him as even more of a long shot – with Democrats giddily joining the pile-on. More interesting, and potentially more significant, though, is how influential Republicans will react if Romney is widely considered the loser tonight.

As Blake Zeff notes at Capital New York, the Romney campaign has already talked up several turnaround moments to Republican donors and opinion-shapers and failed to deliver on them:

Obviously, in the event of a setback tonight, Romney’s team will point to the two remaining presidential debates. But if the reviews are bad, there will be two things worth watching for on the Republican side.

One is pressure on Paul Ryan to pick up the slack and to play a more assertive role. There have already been some “Let Ryan be Ryan!” calls from the right, and they will grow much louder if conservatives conclude that Romney isn’t willing to deliver or capable of delivering the message they want to hear. As I’ve written before, this could put Ryan in a tough spot. The Romney campaign wants him to be a generic vice presidential candidate and doesn’t want the GOP ticket defined by his far-right budget blueprint. But if he plays along and then loses his debate with Joe Biden, conservatives – who viewed Ryan as a hero when Romney picked him – might decide that he’s part of the problem, and begin looking elsewhere for a post-2012 leader.

There’s also the question of resources. As Romney’s prospects darkened in September, the political world began watching for signs of GOP donors and outside money groups bailing on him and redirecting their money and energy to Senate and House contests. That’s the indignity that the last Republican to challenge a sitting Democratic president, Bob Dole in 1996, suffered, with national Republicans deciding in the final weeks of that campaign to make a pitch for divided government to voters and urging them not to give Bill Clinton a “blank check” in a second term.

That hasn’t happened to Romney yet, and the polls are much closer now than they were in ’96. But there were echoes of that Dole ’96 strategy in comments that Mitch McConnell made recently to the (Louisville) Courier-Journal. After arguing that “virtually everything” Obama did wrong as president came in 2009 and 2010 – when his party controlled both the House and the Senate – McConnell proclaimed that “I’m pretty confident the American people are not going to go back to 2009 and 2010 and let the other side have total control of the government.” That’s not as explicit as what Republicans said about Dole 16 years ago – but it’s starting to get close.