"Looper's" fine and good, but Bruce Willis ain't got nothing on Mick Jagger in "Freejack" 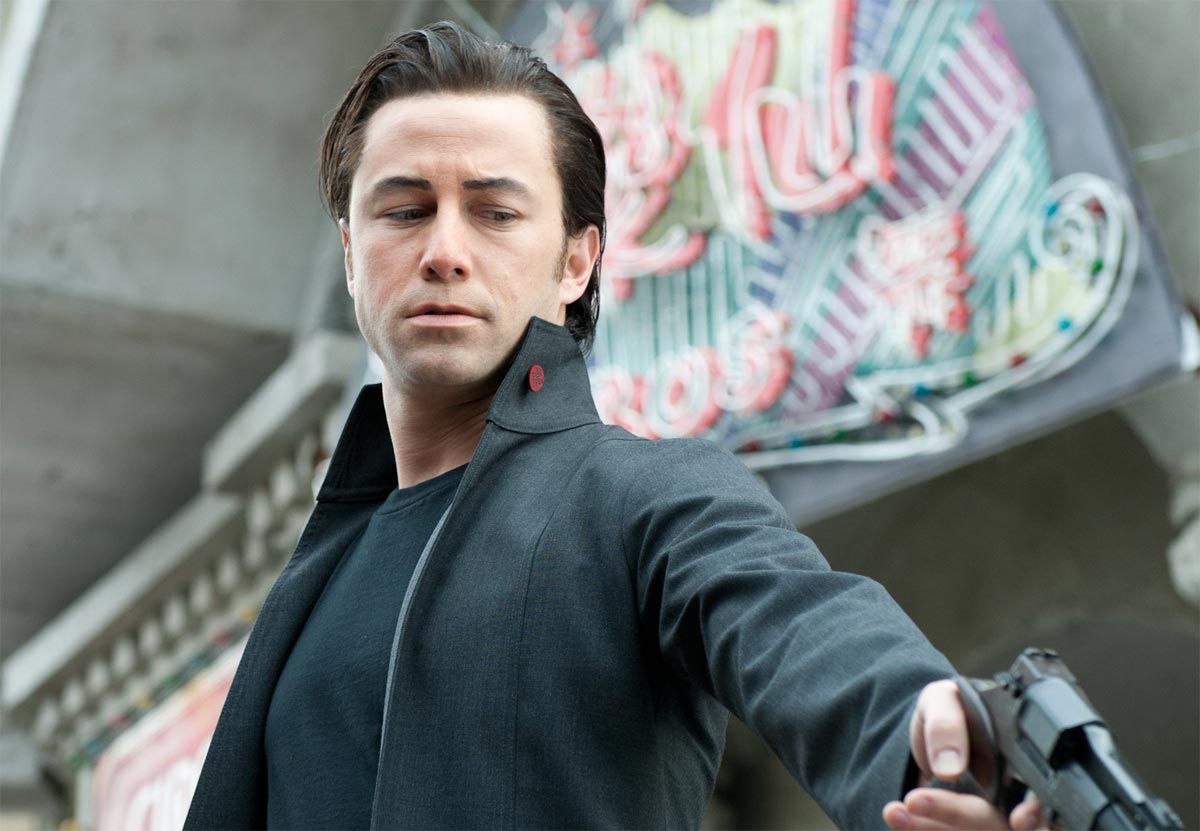 Film critics and the social media grapevine are gushing about recent cinematic release "Looper." I won't be quoting any of these reviews thanks to a tweet by the New York Times Magazine's Adam Sternbergh, which warns us off of them: "I'm generally not super-spoiler-averse but Looper is worth going into as blind as possible (beyond what's in the trailer). It pays off."

I am spoiler-averse, so instead, the barest summation of the trailer: time travel is illegal in the future, but a mafia-esque organization hires a hitman (Joseph Gordon Levitt) in 2078 to eliminate all the foes they send back in time. All goes swimmingly until one day the kneeling man who materializes before him is...himself, older, in the form of a weathered Bruce Willis. What does it mean? Who sent him? What did he do? The shit hits the fan, or at least the future collides with the past, and it looks like at some point a bullet might hit a body, too. Check it out:

The trailer also has early review blurbs, including one that calls "Looper" the "Best Action Movie in Years," courtesy Peter Travers (or someone; aren't they all Peter Travers?). But sci-fi buffs would like to think that despite the high-speed chasing, the post-"Inception" effects, and the presence of Bruce Willis, "Looper" will put the time-travel concept at the forefront, warping the continuum and melting our brains in the process. At its best, it will imagine new ways to transgress the limits of half-lives, and strange examples of the future, past and present at hand. Here are some other great sci-fi time travel movies.

1. "Freejack" This 1992 film was so prescient one wonders if the subtext is that it was actually some kind of Nostradamus text predicting 2012. A race car driver played by Emilio Estevez appears to croak in a rather spectacular fashion, but is actually just transported to the ominous year 2009, which happens to be the same year Michael Bloomberg was elected to his third term as mayor of New York City. I mention this because in "Freejack," 2009 is the year in which Emilio Estevez's character's body is meant to be hijacked and swapped with the brain of a super-billionaire in order to elongate the billionaire's life expectancy. Has Bloomberg been looking a little Sheen-y lately? Just kidding. Based on a novel by Robert Sheckley, this movie has all the slick dystopian action elements of a "Total Recall," as well as a casting coup in the form of Mick Jagger, who plays a villain.

2. "Stargate" When this James Spader vehicle dropped it was very poorly received (by everyone but sci-fi nerds), and on paper, it's pretty clear why. A film that spilled its huge budget on disproportionately janky effects, it's about an archaeologist who believes that aliens built the pyramids instead of human Egyptians, a surprisingly prevalent real-life viewpoint but "Stargate's" protagonist has a reason: a giant ring (the stargate) that was unearthed in a dig in the 1920s, which turns out to be a portal between cosmic time and space. As the earthly travelers discover, all major religions are basically extraterrestrial inventions meant to subvert the humans so they will bow down to the extreme power of invading aliens, which is AWESOME, and a way more fun belief than straight-up atheism. Plus Jaye Davidson ("The Crying Game") plays an awesome, androgynous, evil-staring Ra with a killer wardrobe.

3. "Frequency" Get this: the wigging-out aurora borealis imbues some kind of magic into a ham radio, so when John (James Caviezel) hops on the line, he is able to communicate with his own father (Dennis Quaid) who's speaking 30 years in the past. Wild! John uses the opportunity to warn dad about the fire he dies in, thus saving his life but butterfly-effecting history, creating a new timeline wherein Pops croaks from lung cancer and John's mother is brutally murdered by a serial killer. From there, "Frequency" becomes a pretty fun little detective film, with dad and son working together across the annals of time to catch the killer and prevent mom's death. It's a time-travel buddy movie of sorts, more feel-good thriller than sci-fi mindblower, but every once in a while it's nice to have a break from the heady confines of alternate worlds. It's also an exercise in the minimal amount of believability one needs to set up a good time-travel film: the aurora borealis is freaking out and then the ham radio becomes a communication device across decades! Right?!

4. "Time Bandits" One of the greatest time-travel films ever made, don't ever let anyone tell you otherwise. It's wackiness to the max: a kid and four dwarves race through time—ancient Greece, Napoleonic wars, a brief stint on the Titanic—trying to escape the Supreme Being (a giant head), who wants the dwarves to return a map of time's fabric, which they've been using to pillage history of its riches. They encounter a giant, a minotaur, and evil itself among other things. If you hate Monty Python, you will hate this movie, as it's the essence of Python's whole deal; otherwise, the '80s special effects are all hand-rendered and excellently scary, and at its core it's an old-fashioned good-vs.-evil flick. Classic.

5. "Bill & Ted's Excellent Adventure" Essentially a wacky American response to "Time Bandits," in which Keanu Reeves played the greatest role he ever got, and stoners across America were exposed to a bit of history. In a perfect symbol of late-'80s capitalism, Bill and Ted time-travel from their favorite hangout, the Circle K convenience store, inside a phone booth, zapping throughout history at the behest of Rufus, a shadowy figure from the future (played by awesome George Carlin, RIP). Bill and Ted are about to flunk their history final, and if they do, the future will be forever altered. Humans in the 2600s abide by the peace, love and harmony wrought by the bitchin' sounds of Bill and Ted's band Wyld Stallyns, but if they fail, Ted's pops is shipping him off to military school and Wyld Stallyns will never record again. Rufus sends them back to Napoleon's era (sound familiar?) to learn straight from the source, and they also pick up a few friends on the way, including Sigmund Freud, Billy the Kid, Socrates, and Joan of Arc. It's so good, and so emblematic of the California-style chill-out subculture that dominated the era. There is a sequel, "Bill & Ted's Bogus Journey," but it sucks.

6. "Back to the Future 2" The sequel to the career-defining Michael J. Fox film is better than the original for the sole reason that it involved more creativity and vision (we don't talk about part 3 around here). Rather than just recreating the 1950s, writer Bob Gale envisioned an extremely cool future that included floating hoverboards and an inflatable Nike so iconic that when the shoe company actually made the shoe for public consumption, the price climbed above $3,500 a pair. (Lest you are grossed out by the capitalism, all proceeds were donated to the Michael J. Fox Foundation for Parkinson's Research.) Gale's future was so convincing—including virtual reality ads that were essentially 3-D hologramic .gifs—that as we approach 2015, the year depicted in the movie, a lot of fans are going to be really disappointed if our cities don't at least partially resemble it. Whatever happened to flying cars, anyway?! As with many time-travel films, this is based on a butterfly effect: Marty McFly and the Doc alter the future by accident, so when they come back to the past, their 1985 is very different from the one they left. The premise that they have to set things right underscores the dread that people typically attached to time travel—if we can slip in and out of years, who's to say we're not going to accidentally do that one thing that's going to cause a nuclear war or something?

7. "Timequest" Alternately, people love imagining going back in time and changing history for the better, and no event is depicted in time-travel films as frequently as the assassination of JFK. What better chance to be a hero than to save the life of the president—thereby preventing the Vietnam War, as this film surmises? It's pretty corny compared to other examples of JFK timeline-altering (episodes of "Quantum Leap" and "Red Dwarf," for instance), though it does present the clearest, most optimistic viewpoint of the outcome: the world is a better place, Bobby subsequently becomes the president, and the CIA is disbanded in 1963 (keeping it from doing a whole host of hellacious things).

8. "13 Going on 30" Really though? A time-traveling romantic comedy starring Jennifer Garner with a nostalgic '80s soundtrack? Yes, really: as the anti-"Mean Girls," this feminist film is about a young girl in the 1980s who magically fast-forwards to her life at 30 as a high-powered magazine editor, and realizes that as an adult she turns into a giant a-hole. As a 13-year-old in an adult body, she sets about trying to make her life right, being nicer to people like her personal assistant (shame on anyone who treats their PA like shit) and transforming her Vogue-ish mag into a more encouraging, empowering Oprah-style jam. (Hey, it's a fantasy film, anything can happen.) A gem of a film that is a lot less corny than it sounds, it represents the timeline-altering concept at its most self-fulfilling, betting on the idea that given the chance, we'd all fix our pasts and futures to make ourselves become the best (or richest!) versions of ourselves. It's idealistic, but in a landscape of dystopian outcomes, it's very refreshing.