Is "Modern Family" really that good?

The sitcom cleaned up at the Emmys. Too bad the show has descended into tiresome and sometimes nasty shtick 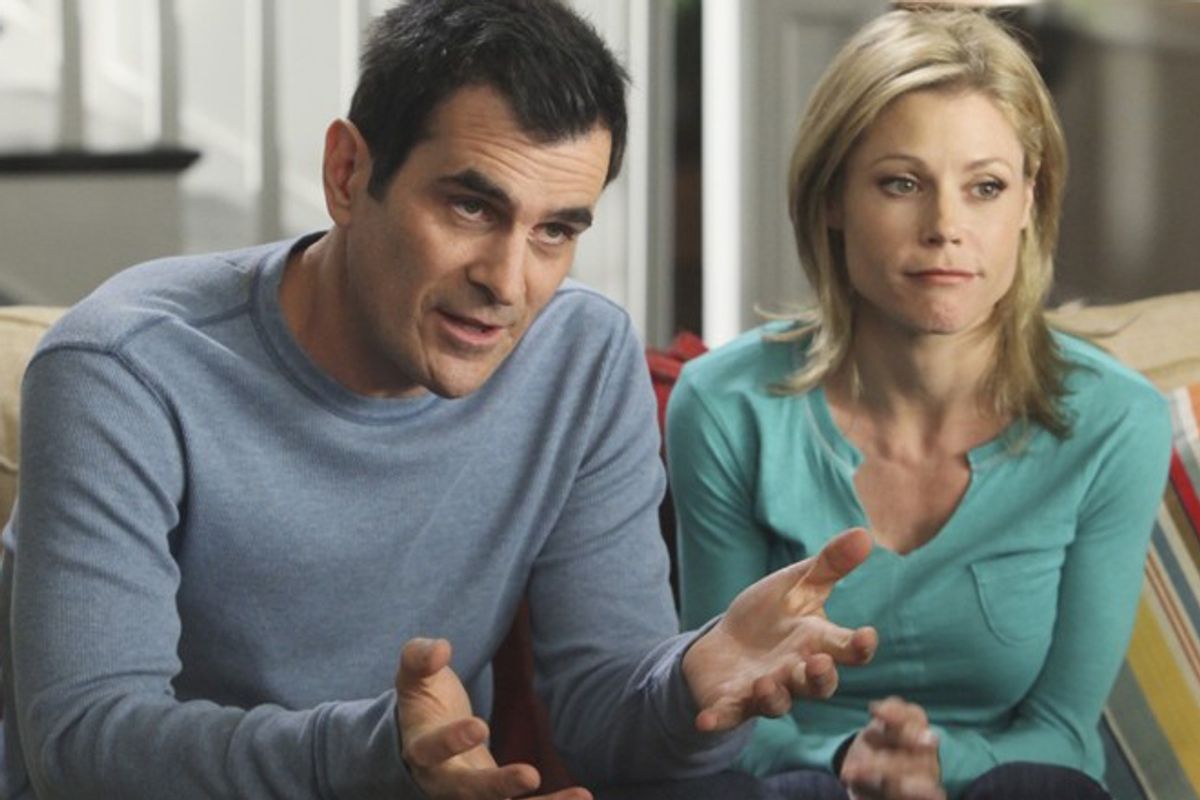 A week and a half ago, “Modern Family” cleaned up at the Emmys, winning best supporting actor and actress in a comedy, best comedy direction and best comedy for the third year in a row. By the end of the telecast, which also included a funny sketch pretending that the child actress who plays Lily is a bratty little diva, it felt like a big party thrown in “Modern Family’s” honor. But as the series begins its fourth season — it premiered last week — “Modern Family” is not the sitcom it once was. Its Emmy victories obfuscate the mean streak running through all the feel-good family comedy.

It’s easy to see why Emmy voters love “Modern Family”: It is neither tragically hip nor unhip. It splits the difference between the old-fashioned, retrograde, popular, anti-wit sitcoms CBS specializes in and the edgy, niche, boundary-pushing, low-rated comedies that the Internet is obsessed with (“Parks & Recreation,” “Community,” “Girls,” “Louie”). “Modern Family” is old-fashioned yet socially liberal, well-watched but actually funny. It’s not particularly innovative, but it is also not “Two and a Half Men.”

“Modern Family’s” best episodes still follow the heartwarming but not cloying formula laid out in the pilot, in which the extended Pritchett-Dunphy-Delgado-Tucker clan all ended up in a swimming pool. In any given episode, various permutations of the large cast pair off in story lines that will, we hope, echo and involve one another, climaxing in an antic full-family farce showcasing love and zaniness, such as, to pick one example at random, a super-competitive family pumpkin toss. Tear-jerking moments are cut with zingers, or at the very least sight gags.

But as “Modern Family” has gotten older, its characters, and their dynamics, have settled into grooves, some more discordant than others. Manny, the hyper-adult 13-year-old who says things like, “Jay! Will you steep my tea!” remains a delight, even if his material has hardened, like everyone else's, into shtick. Less pleasant and more tiresome are the adults. Four seasons in, Jay is still consumed by manliness and his son and stepson’s lack of it. Phil “cool dad” Dunphy has become more buffoonish, Claire Dunphy more of a shrew.

Even the relationship that established “Modern Family” as a liberal cause célèbre has sprouted clay feet. Cam and Mitchell, the happily settled gay couple with an adopted daughter, have, for the past three years, been beamed into a huge number of American living rooms where they have ably demonstrated that gay couples can be as dull and petty as straight ones. This is just as undoubtedly a social good as it is occasionally tiresome television.

The uptight Mitchell and the more flamboyant Cam bicker constantly, both experts at taking offense. When they make up, as they always do, they do so without physical affection. The outrage that the pair had never kissed on-screen died down after a Season 2 episode explained that Mitchell is embarrassed by public displays of affection, but he hugs his sister and father more than he does his partner. NBC’s “The New Normal” may be deranged, but at least the gay couple kiss and are seen in bed together.

The most complete character assassination has been to Gloria, Jay’s younger wife and Manny’s mother. Sofia Vergara, who plays Gloria, has a Spanish accent thicker than the Earth’s crust and a, uh, mountain range to match. Along with Ty Burrell, who plays Phil, she was one of the break-out stars of “Modern Family’s” first season. Despite capably handling all the material she has ever been given, Vergara has been handed increasingly shallower story lines, some of which she wrings big laughs out of anyway. Playing a fiery Latina, her arcs regularly revolve around predicable “fiery Latina” jokes: her pronunciation, the violence of her native Colombia, her looks. She insists on prancing around in ridiculously tall shoes! She is hot-headed and stubborn! She can’t pronounce “Luke”! She shrieks! She really shrieks! If it’s not quite on the level of “Two Broke Girls,” it’s only because some of this will make you laugh.

But the ultimate example of “Modern Family’s” stealth nastiness resides in its treatment of Claire Dunphy. Claire is a control freak, and as the series has gone on, she has become more so. Tasked with overseeing the smooth running of her household, she can be shrill and bossy, finger-pointing and cutting. She is often emasculating her overgrown, goofball husband Phil, a big irrepressible kid who is a sweetheart of a guy despite offering very little help around the house. (He also runs around talking about how hot his mother-in-law Gloria is all the time, which is not cute, just creepy, and one of the examples of how “Modern Family” often pits Claire and Gloria against each other.) She can be dismissive, and a nag to her children. It is understood by all the Dunphys, Claire included, that she is what makes their family run and also that she is no fun.

In an arc from last season, Claire, a stay-at-home mom, ran for city council. Preparing for a debate her family — hilariously, it must be said — cautioned her against using her regular array of condescending, angry gestures and vocal tics, a kind of roast of her commandeering habits. On Election Day, almost every single one of Claire’s family members failed to really help her, a show of incompetence for which — in contravention of “Modern Family’s” standard style — there were no apologies or consequences, except Claire’s defeat. Another episode from last season featured Claire and her two daughters simultaneously getting their periods, and subsequently becoming unhinged and overly emotional. A commenter at the AV Club noted it was impossible to tell the difference between "period Claire" and "normal Claire."

Despite all of this, I still really like Claire and I’m not the only one. Julie Bowen, who plays Claire, won her second straight Emmy last week, which she dearly deserves: She plays, on paper, “Modern Family’s” most unlikable character and she does so with no caviling or pulled punches, just spiky, committed energy and a knack for pratfalls. As sitcoms get older they often end up being about, inadvertently, people’s inability to change: Characters stay more or less the same, because the traits and quirks and jokes they have and make stay more or less the same. Claire knows that she is high-strung and lacerating, and that she can’t stop herself. She is constitutionally fated to be the grown-up. (I would be really interested to see a poll of Claire and Phil's respective likability, broken out on gender lines.)

Bowen’s performance and her Emmy wins insulate “Modern Family” from its cruelty toward her character. However badly the show treats Claire, Emmy voters still have compassion for her, so it can’t be that bad, right? But Bowen does what all of the actors on “Modern Family” do: allows the show to get away with jabs and slights by being better, funnier, more sympathetic and more nuanced than the material they are given.