A perverse love of drinking and driving landed me in Gowanda Correctional Facility. I'm glad it did 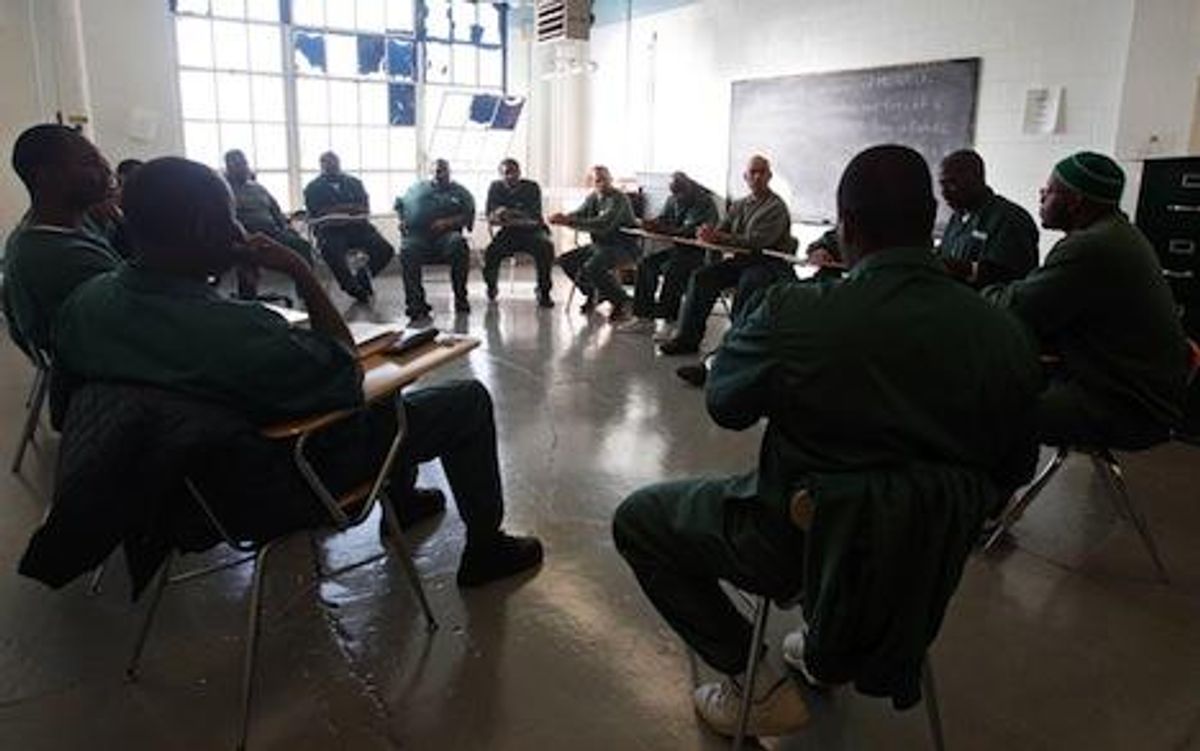 Mr. Wood called me a “homo,” and so I have him in a headlock. Somehow he has me in one, too. We are trying to kill each other without shots to the face, without leaving any marks. We have never been friends.

I am living as a prisoner in Gowanda Correctional Facility, a repurposed mental institution—sprawling, brick and actually kind of pastoral—leased by a local tribe to the New York State Department of Corrections for the purpose of housing, punishing and rehabilitating drunk drivers and sex offenders. You can spot the window sashes here in at least one scene of The Natural, starring Robert Redford and filmed here in the ‘80s, while the place was otherwise empty. There is a rumor floating around that the tribe will not renew the lease, that the tribe wants a casino.

My bunkie, Mr. McQuinn, a disgraced 59-year-old attorney with 14 DWI convictions, now fairly levitates, pressed up against the Redford windows of our cell, attempting to stay as far away from the violence and Mr. Wood and me as possible. He knows to stay quiet and we know to stay quiet as we pitch from one wall to the other, slowly, cartoonishly crashing about my blown-steel bed. If we attract the attention of the officer on this floor or, just as bad, if we leave marks, we are both headed to the SHU, the Special Housing Unit, the Box. No questions asked.

Behind me I have oceans of beer, four DWI convictions, two little girls and an ex-wife in an ex-house; a job I always felt was below my abilities; and personal belongings scattered throughout Vermont and upstate New York. I think I might have been a bad person, although I believe I did many things in earnest. I was educated, I loved curry, indie rock and postmodern fiction. I miss my saddle shoes and the feel of a woman, my wife, coming to bed with wet, cold hair after a late-night shower. I’ve been through drug court, counseling, AA and self-reproach. I just kept drinking and breaking the law.

From about the age of 13—beginning with a choked-down Coors Light—beer has been my constant companion. I used all the drugs I could work into my life without consequence until about age 21, but I always came home to beer, and just knew we’d be together forever. Beer and me.

But then somewhere along the line I began (insanely) to associate beer with driving. That is, I’m not the type of drinker who goes to a bar, gets drunk and then drives away (although I certainly have done so). Much worse, I have a thing for driving while drinking. I have loved the feeling of cruising unimproved country roads in a sort of fast car with an ice-cold Heineken between my legs. And the fact that I enjoy this and have chosen (sober) to do it after two years or six months of what I defined as recovery tells me that I am indeed an alcoholic. That I can take this kind of risk. That I could lose my family or kill someone else’s. That I could lose my home, my freedom, my time.

So when I came into the prison system last year, I guess it wasn’t so much about admitting I was powerless over alcohol as being faced with a mountain of evidence I could no longer deny: four DWIs, divorced, estranged and nearly 40 years old.

Mr. Wood knows none of this. If he did, I’m convinced he would think me even more the effete asshole than he does now. And as we struggle to land punches in the bread basket, in our state-issued greens, I feel nothing—no pain, no consequence, no craving, no longing. I simply want to bring Mr. Wood to submission in a way that will leave no marks. It is my newest, fondest wish.

Despite all the stress, violence, chill, lousy food and abusive staff, I do believe there is recovery to be had in prison. And if you’re lucky, you can get a kind of default recovery before you even arrive at a place like this, right from the moment you get the DWI.

When you get the DWI, you know instantly that with your record you are going to prison. You spend the summer in exile from your wife and children. You drink your face off. You cry. You rarely eat. Fall arrives and with it a sentence of one to three years—with the slim possibility that you’ll be sent to SHOCK, a sort of boot-camp program, six months in duration.

You’re sentenced, remanded to county jail, and after a couple weeks you are transferred to state custody. You leave your very well-lit and frigid jail and travel north to the Shawshank-y and ancient Clinton Correctional Facility (aka Dannemora). Here you are processed: head shaved bald; state greens issued and donned, making you look and feel like a mop handle in a Glad bag; physical; brief mental eval (Q: Thinking of suicide? A: Not since lunch. Q: Ever had sex with a man? A: No.).

From here you bounce down to a place called Downstate. Bounce, but really you’re in leg irons and cuffs, Siamesed to another dude for the 12-hour trip. You piss in the back of the bus while your buddy looks the other way. At Downstate you are evaluated further: psych, escape risk, math, reading, TB. The place is beyond filthy. The officers are maybe more criminal at heart than their charges and you are held in solitary 20–23 hours per day. Six weeks and your hopes of a quick stay at boot camp dwindle to zip as you leave for Upstate, Gowanda and its program for drunk drivers.

DWI class is three hours a day, five a week, for 26 weeks. Lessons are centered on the bio-chemistry of addiction, criminal thinking, the family—everything you already knew but never applied because you hadn’t yet lost (or given away) enough. Material is presented by people who care and by others who you think might well have once cared. The whole thing is based on the therapeutic community model of recovery, which features a lot of holding others accountable for negative behavior—and which absolutely does not work in prison because you don’t want to get cut. No one snitches.

Each afternoon there is posted a notice of required appointments for the following day, broken down by inmate, time and location. Late January has a 10am appointment for you and it’s your divorce. The family court judge in Vermont has obligingly compressed the proceedings to a few short months and allowed for this to happen over the phone. You make a mental note that you need to actively try to stop loving your ex-wife.

Your recovery begins to look like it might not be happening. You lift weights outside in the snow like theRocky movie where he fights the Russian. You attempt to erase your ex-wife from your “spank bank.” You try to cry and fail. You start asking God for help even though you never have and you feel guilty that these are foxhole prayers from an asshole—because your brother died unfairly four years ago and if God didn’t feel like helping him, why would he help a shit heel like you?

But it seems to work. You start to feel a rhythm and a release that’s increasingly a part of your day and a source of peace. Maybe the only.

Before long, you take over as chair of the Monday-night step/tradition meeting. Good and funny things happen in AA: A man called Singleton (always last names in Gowanda AA) asks when is it appropriate to take one’s relationship with one’s female sponsor to the next level. But AA here is so pure, perhaps due to its beginner-ness. Reworking the steps as a newcomer turns out to be powerful and you appreciate the urgency and lack of smugness that you groaned at on the street. You attend AA more and go to the weight pit less.

There is recovery in prison. You just have to keep the bullshit you must engage in—the getting over, the cops, the occasional violence—separate from that which you know must remain intact if you are ever going to make it: your soul and its improving health.

After a couple of months you join another group, a men’s (obviously) discussion forum called Cephas, begun after the Attica prison riots of 1971. Here, because these guys are not specifically alcoholic, there are a number of fellows from the “dark side”—or the sex-offender half—of the prison. When they speak you cringe, you get flushed, you think of their victims and your daughters and you judge, judge, judge.

Until finally you decide that maybe judgment isn’t so very good for your recovery, and all that prayer and humility stuff you were faking starts to leak from one side of your ginny mind and you think you might feel some fucking compassion, empathy, whatever. Sometimes it’s there and sometimes it’s not, but these spotty bits of light seem to have a Richter-Scale effect on the rest of your days. You think less about your wife banging some tattoo artist and more about how you’re going to be a better, sober dad, son and friend.

Just in time, too. It feels mighty lousy to sit in front of the parole board and lie about your recovery goals. You feel pretty lousy lying about anything these days, you find, to yourself or anyone else. You’re not sure if all the bad stuff about prison or the rare moments of transcendence has led you here, but you feel better and you feel like being good.

An enormous bald man named Sid has pulled Mr. Wood from me. The Mr. Wood who lately had his very strong fingers laced around my neck as I lay supine on my steel bed, having lost my footing on the slick polished floor. My leg had been pinched between his knee and the bed’s hard rail. Everyone who has gathered to silently observe disperses and heads to the 8am call for GED class, facility maintenance, anger management. The next day, in the cavern of the community shower, a guy named Tommy asks me what is that enormous blue-green/brown-yellow blotch leaching down the back of my right calf. For all my efforts to the contrary, there is a mark.