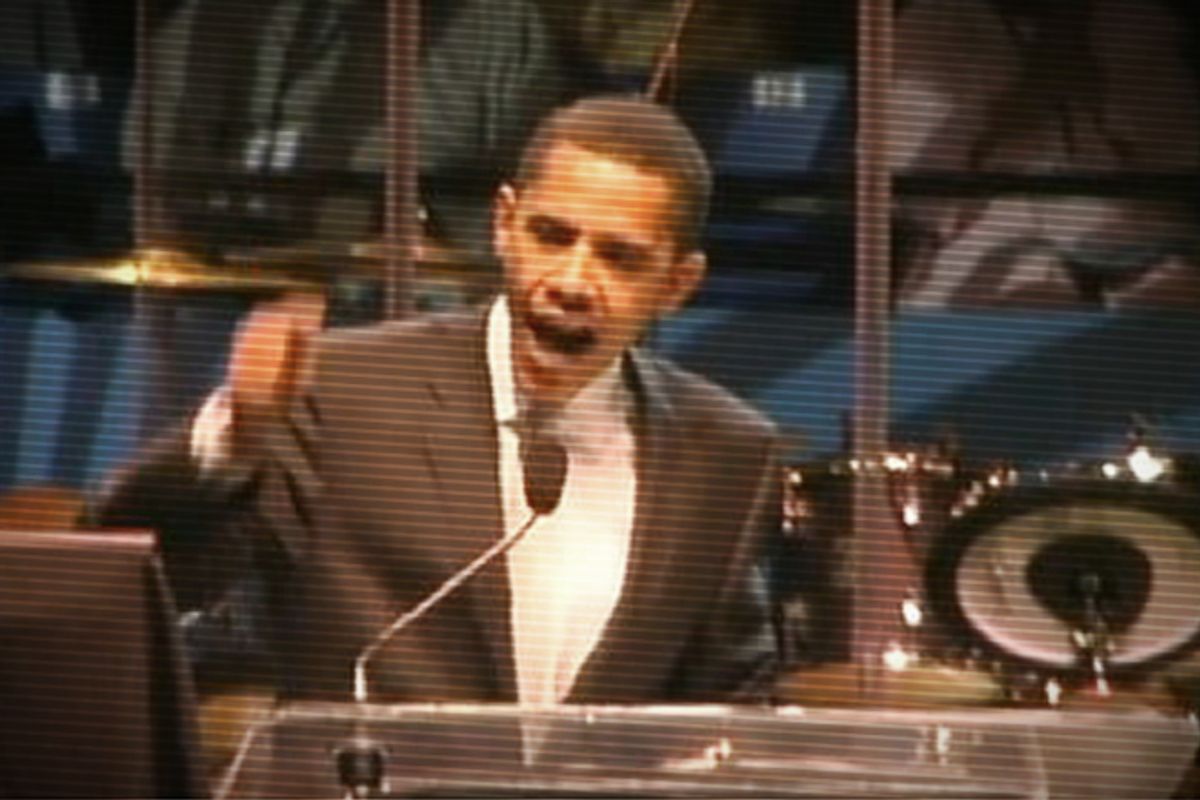 I'm promoting a book that says we need to give most white people the benefit of the doubt: Most of us aren't in revolt against multiracial America, or the president who heralded its arrival before many were ready.

But sadly, some white people are just that crazy, and Sean Hannity and Tucker Carlson are their Pied Pipers, leading them off a cliff.

Tuesday night they hyped a 2007 Barack Obama speech to a group of black ministers at Hampton University in Virginia, and they engaged in the most rancid racial fear-mongering I've seen in a long time. Hannity hailed the speech as "a glimpse into the mind of the real Barack Obama," and he tried out his own black preacher voice for special effect. Carlson insisted Obama was preaching racial division to his black audience and sputtered, "This is not a dog whistle, this is a dog siren!"

Mainly, their complaint came down to: How dare a black president (or at the time, presidential candidate) talk to a black audience about black poverty and suffering! And the legacy of slavery, and the endurance of racism! Has he no shame?

There was absolutely nothing objectionable in Obama's speech. (I watched the whole thing on the Daily Caller Web site, but I won't link to it.) It made me proud to have a president who could speak with that complexity. If you know anything about his audience of African-American ministers, you could hear him at one point chiding them for their own divisions and competitiveness. It was a speech that preached personal responsibility as part of the answer to poverty.

Was his accent a little different with that crowd? Well, so was Hillary Clinton's and Al Gore's in comparable situations – as Hannity noted with no self-awareness. So was Joe Biden's at the NAACP. White politicians pick up a certain ... cadence in black crowds, and they maybe get teased a little. Obama does it, and it's a racial scandal.

"This accent is absurd," Carlson told Hannity, clutching his pearls. "This is not the way Obama talks. It's put on, it's phony."

Side note: What we have here is an epidemic of white guys ruling on the correct way for other people to identify themselves in ethnic terms. First Scott Brown insists Elizabeth Warren "obviously" doesn't have Native American heritage because she doesn't look like she does. Now Tucker is telling us he knows how Obama really talks. On Twitter, Adam Weinstein quipped: "Scott Brown and Tucker Carlson should start a 'School of Telling People What Indians Look Like and Blacks Sound Like.'"

Let me pull out just a few of the worst distortions. Hannity and Carlson hyped Obama's "shout-out" to Rev. Jeremiah Wright, but amazingly ignored the part of his speech where he said Wright "introduced me to someone named Jesus Christ, and I learned that my sins could be redeemed." (This from our first Muslim president.) On Fox, Hannity played the Wright "shout-out" side by side with Obama's later denunciation of Wright, as though the Wright remarks revealed in 2008 were already public when Obama greeted him at the 2007 speech. I shock myself at my ability to be shocked by these frauds, but that was pretty shocking.

Then they claimed Obama was fomenting racial hate by complaining about the federal government's response to Katrina – which plenty of white people complained about, too. They took particular issue with his claim that federal Stafford Act funding in Louisiana was less liberal than it had been with New Yorkers after 9/11 and Florida residents after Hurricane Andrew.  But it took a quick Google search to find a white Louisiana politician, Sean Reilly of the Louisiana Recovery Authority, making the exact same complaint to PBS's Frontline.

They absolutely ignore his suggestion that churches and families have to take more of a role in uplifting the black community. One solution to poverty, he told the preachers, is "to take individual responsibility for our families." He suggests poor people need to "turn off the TV and read a book" to their children, and stop feeding them "Jay's Potato Chips." He tells young people to put down their video games and get to work.

I really don't know how anyone could watch the whole speech and not come away at least a little moved. Carlson must have had interns watch it and pick out the parts that served right-wing prejudices, because all of that God talk, and all the talk about the responsibility of churches, and families, and individuals, sounded almost ... Republican. Or "Republican" before we had a black president, and the party's appeal began to rely so heavily on racism.

Carlson's piece in the Daily Caller ends on the craziest note, complaining that Obama ended his speech this way:

Three hundred years ago. It’s a reference the audience understood.

Was Obama referring to slavery? And did the audience understand? And is that scary? Are we at a point where references to slavery and white racism are themselves racist? What is he talking about?

It pains me to pay attention to Carlson and Hannity. They're hucksters and I mostly ignore them. And Matt Drudge too, who hyped the video much of Tuesday evening. They're all trolls. But they're singing from a GOP hymnal that we'll hear more from before Nov. 6. It's getting uglier, but it's also getting dumber. They're losing, and they know it.