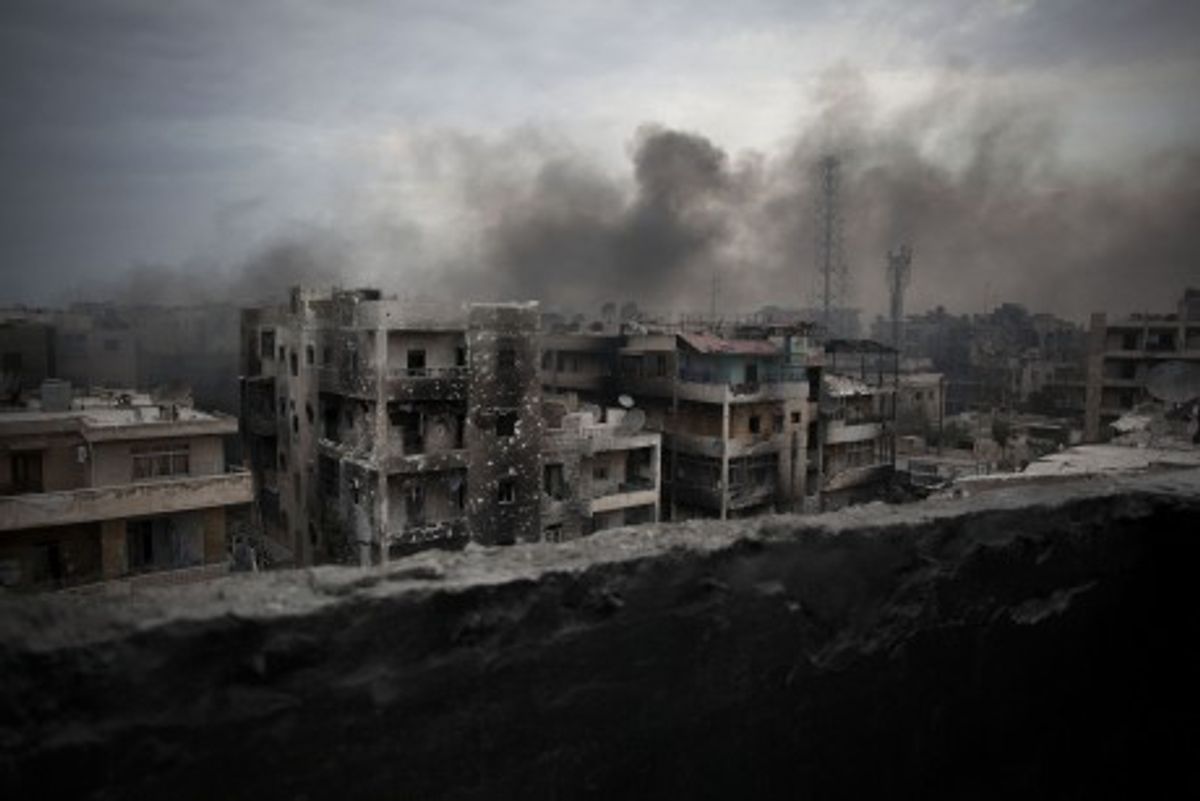 The blasts went off at a main square in a government-controlled district of the city, while a fourth explosion detonated a few hundred meters (yards) away near the Chamber of Commerce, they said.

Aleppo, Syria's commercial hub and largest city, has seen intensified fighting between regime forces and rebels trying to oust President Bashar Assad, especially after the fighters launched a new offensive last week. But it has not been the target of frequent suicide attacks, and Wednesday's stunning wave of explosions caused panic and fear among residents.

State-run news agency SANA said the bombings targeted Saadallah al-Jabri square, describing them as the work of "terrorists," and said at least 31 people were killed and dozens of others were wounded. Authorities refer to rebels fighting to topple Assad as terrorists and armed gangs.

A state-run channel, Ikhbariya, showed footage of massive damage around the square, which also houses a famous hotel. One building appeared leveled to the ground. The facade of another was heavily damaged.

The TV showed footage of several bodies, including one being pulled from the rubble of a collapsed building.

"It was like a series of earthquakes," said a shaken resident who declined to be identified for fear of reprisals. "It was terrifying, terrifying."

He said the officers' club and the hotel were almost completely destroyed. His account could not be immediately verified, although the TV footage showed at least one building reduced to rubble.

A Syrian government official said the number of deaths would likely increase because many of the wounded were in critical condition. Speaking to The Associated Press on condition of anonymity in line with government regulations, he said soldiers killed two more would-be suicide bombers at the scene, before they could detonate their explosives.

Aleppo-based activist Mohammad Saeed said the explosions went off minutes apart at one of the city's main squares. He said the blasts appear to have been caused by car bombs and were followed by clashes and heavy gunfire.

"The area is heavily fortified by security and the presence of shabiha," he said, referring to pro-regime gunmen. "It makes you wonder how car bombs could reach there," he added.

The Britain-based Syrian Observatory for Human Rights, which relies on a network of activists on the ground, reported dozens of casualties from the blasts, most of them members of the regime forces.

A statement from the observatory said the explosions followed a clash between guards at the officers' club and gunmen. It said a fourth car bomb went off in the Bab Jnein area near the Chamber of Commerce, causing an unspecified number of casualties there.

During the course of the 18-month-uprising against Assad, suicide and car bombings targeting security agencies and soldiers have become common in Syria, particularly in the capital, Damascus.

But Aleppo has been spared from such bombings and from the mayhem that struck other Syrian cities, particularly in the first year of the revolt. Then, in February, two suicide car bombers hit security compounds in Aleppo's industrial center, killing 28 people.

The uprising against Assad erupted in March 2011 and gradually morphed into a bloody civil war. The conflict has killed more than 30,000 people, activists say, and has devastated entire neighborhoods in Syria's main cities, including Aleppo.