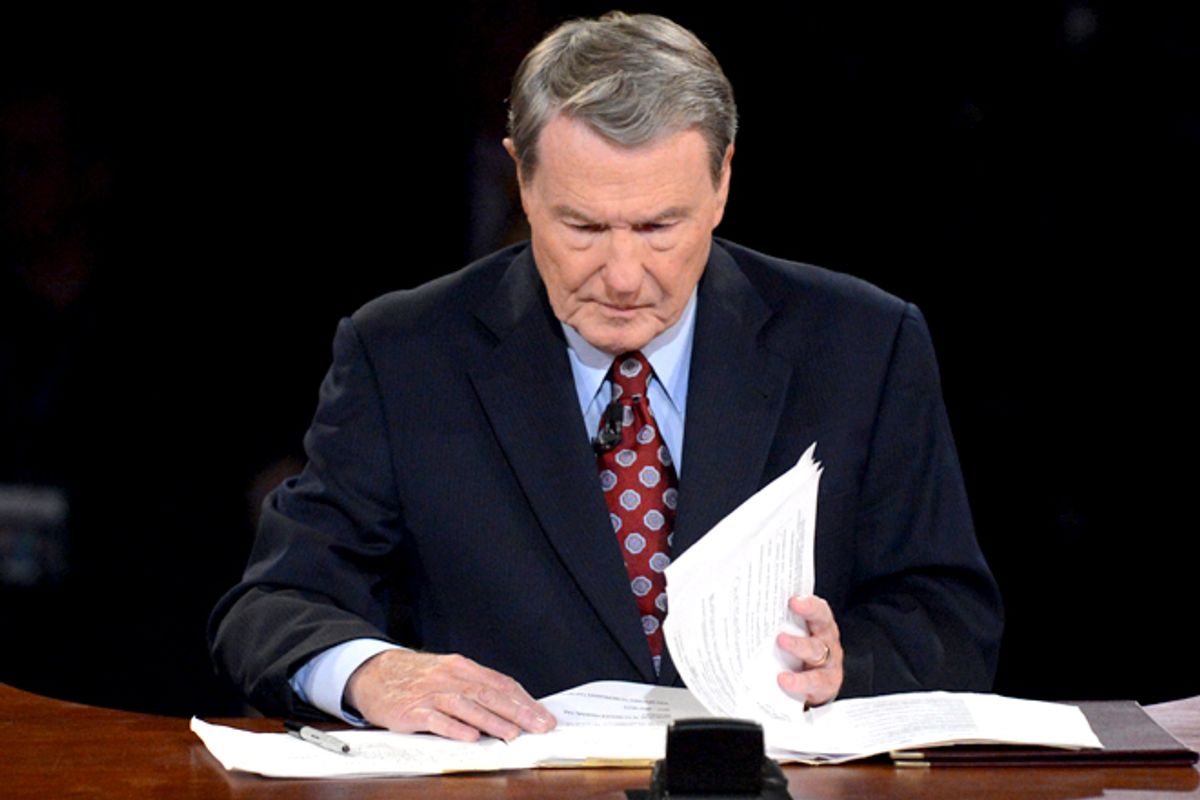 The entire conventional wisdom generation machine runs so rapidly now (it used to take like 24 hours for "everyone" to "agree" that someone "won" the debate!) that the political class is already on the backlash to the backlash to Jim Lehrer's performance as moderator at last night's presidential debate. (The "In Defense of Jim Lehrer" pieces began running, I swear to god, before the takedowns were finished.) But let's please not let him off the hook: He was terrible.

I have no issue with the weird format. "Anything goes, just shout at each other until you run out of things to say" is fine with me, I don't care that much about strictly enforced time limits when people are trying to make points, I'm fine with candidates directly addressing each other.

And the people who hated Lehrer don't "blame" him for Obama's slightly sleepy and decidedly non-knife-twisting performance.

It's just that Lehrer asked incredibly stupid questions. I know it thrilled Chuck Todd that this was a "serious," "policy-heavy" debate, but the candidates just had one argument about Romney's vague tax plan -- making the same points repeatedly -- for more than the first half-hour. Lehrer's insistence on asking the candidates to confirm that they have different ideas about things was bizarre -- Ralph Nader was not onstage arguing that they were Tweedledum and Tweedledee.

Here are the actual questions -- the only questions! -- Lehrer asked:

Not counting follow-ups (SIMPSON-BOWLES, god help us), these were the questions: "How would you create jobs?" "How would you fix the deficit?" "Entitlements?" "Are there too many regulations or not enough regulations?" (The dumbest question of the night!) "Obamacare?" "Do you guys have a rhetorical disagreement about the impossibly amorphous concept of 'the role of government'"?" And finally "how would you fix partisan gridlock?"

So! Sorry, immigration, reproductive health, LGBT civil rights, the environment, campaign finance, the drug war, and voting rights: None of you matter as much as Simpson effing Bowles! (But do you begin to understand why Beltway pundit and commentator types loved this debate so much? It hit all their pet topics!) "Are there too many regulations" is more important than "do you think we should maybe do anything at all to address catastrophic climate change." (Not that either candidate wants to talk about that.)

All of Lehrer's actually useful questions -- "jobs" and healthcare, basically -- could have been taken care of in an hour, leaving time for someone a little more on the ball to maybe show up and ask some other questions that some Americans might have also been sorta curious about.