"The Paperboy" is a swampy stew of race, sex, murder and late-'60s bad-hair days 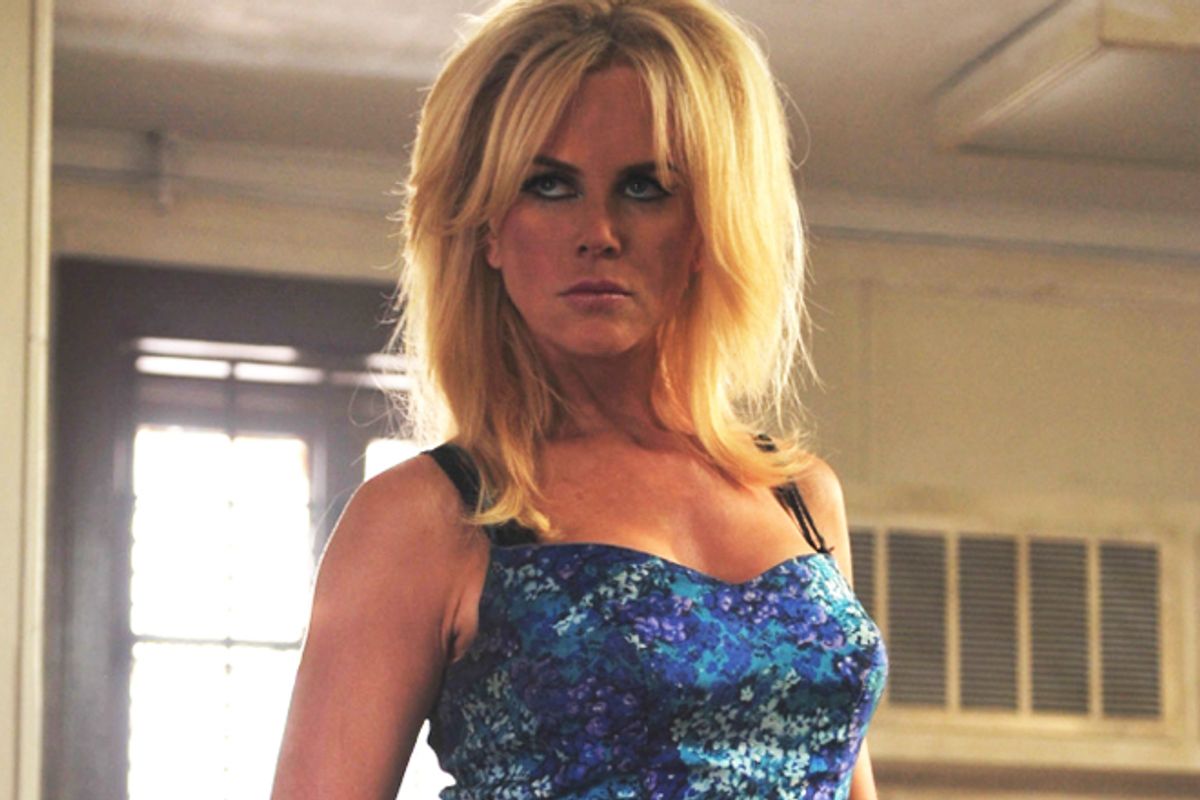 Nicole Kidman in "The Paperboy"
--

There are all kinds of things to say about “The Paperboy,” a sweat-drenched Southern-gothic period melodrama of exactly the sort that four decades ago people would have pretended to find serious, and not just an excuse to look at Paul Newman’s muscles and some buxom lady in a bouffant and a halter-strap dress. No such pretense is necessary here; this adaptation of a Pete Dexter crime novel revels in its own let's-boogie trashiness, maybe a bit too much so. Larger philosophical agendas may be checked at the door along with firearms, though you’ll have more need of the latter.

“The Paperboy” is all about Nicole Kidman in a blond wig and enormous false eyelashes, ostentatiously packing her boobs onto the shelves of a too-tight dress and trailing almost visible streaks of crazy pheromones behind her as she moves through the swampy Florida air. (You can date this movie pretty precisely: It’s the era just before universal air conditioning.) And then there’s Zac Efron, as the not-too-bright but impressively built ex-swimmer pretty boy who follows her around like a sick puppy. There’s a scene in this movie in which Charlotte Bless, Kidman’s character, has to pee all over Jack Jansen, Efron’s character, after he goes swimming in the ocean and gets some bad jellyfish stings. She has to drive off some other girls who want first dibs, assuring them in her redneck twang that if anybody’s gon’ pee on Jack’s face, it’s damn well gon’ be her. Thing is, Charlotte just got done telling Jack that one of those bikini-clad beach girls would probably blow him; she and Jack aren’t a couple, exactly, and she wouldn’t have minded that. But when it comes to something truly personal and intimate, like a golden shower on the beach in broad daylight, that’s when she gets possessive.

But I’m losing the thread here, which may also be relevant to “The Paperboy,” whose plot wanders all over the place before trailing off in a mood of fatalism and pointlessness. What I meant to say was that this movie is not entirely what people may have been expecting from Lee Daniels, the African-American producer-director and all-around entertainment impresario who made “Precious.” Another way of putting it is that “The Paperboy” made me want to go back and watch “Precious” again, with an eye to whether it’s better understood as Grand Guignol farce or intentional high camp, rather than social realism. (I’ve never seen Daniels’ semi-notorious “Shadowboxer,” in which Helen Mirren and Cuba Gooding Jr. play a pair of assassins who are also stepmom and stepson – and lovers! But I really, really want to.)

And yet once you get used to the all-out, heavy-breathing ridiculousness of this movie, which also includes a character who’s into gay, interracial S/M sex (in backwoods Florida! In 1960-whatever!) and the most depraved, rednecky character of John Cusack’s entire career, there actually is a lot going on under the hood of this particular hot-wired Chevy. What seems at first like almost entirely a white-people drama becomes a lot more complicated when you consider that the whole story is being told to us by Jack’s family’s maid, Anita, who is played by Macy Gray with a wonderfully rancorous edge. And there’s another ambiguous and unstable black observer, Yardley (David Oyelowo), who’s one-half of a Miami investigative-reporting team that also includes Ward Jansen (Matthew McConaughey), Jack’s renegade big brother. Yardley’s British, or at least he claims to be, and the nature of his personal and professional relationship with Ward starts out murky and only gets more so. While the portrayal of Southern race relations in the ‘60s is less central here than in “The Help,” it's also less labored and earnest, and one could argue that it’s subtler, more intimate and more honest.

Ward and Yardley have been corresponding with Charlotte, who apparently has a history of epistolary romances with prisoners but has settled on one particular death-row inmate, a swamp-dog convicted murderer named Hillary Van Wetter (Cusack), as her soul mate. They’ve come back to Ward’s hometown, where his dad (Scott Glenn, in a sour mood and sideburns) publishes the local paper and Jack is handling distribution after flunking out of college (i.e., he’s a paperboy), in hopes of a prize-winning exposé that will spring Hillary from prison. Beneath all the narrative switchbacks, lurid detail and local color, Dexter’s plot – he and Daniels co-wrote the screenplay – relies on a simple noir principle: Everyone in this story will get what they want, and then find out they really didn’t want it after all.

Well, everyone except Jack, who loses his heart to Charlotte the first moment he sees her, notwithstanding the fact that she’s nuttier than a Goo Goo Cluster, nearly old enough to be his mom and likely to blow up to the size of a double-wide in five or six years. Oh, she’ll sleep with him, all right – you don’t get the sense she’s terribly discriminating that way – but Charlotte actually possesses enough good judgment to understand, after the fact, that it wasn’t a good idea. Jack’s other important failed relationship is with Anita, Gray’s maid character, who is constantly abused by his intolerable New York stepmother (Nealla Gordon) but never loses her cool. Gray plays the role as if she were an alligator who had taken human form, viewing the multiple idiocies of the Jansen clan from the distance of a superior species. Anita’s affection for Jack isn’t fake, but her doubt that he’ll ever get free of this odious place and its awful people is almost tangible.

Most of the acting in “The Paperboy” is actually pretty restrained, which helps you adjust to all the alligator guts, swamp water and naked flesh. Only John Cusack goes hell-for-leather, but he’s playing a human being partly reverted to the amphibian state, the scummiest, most pree-verted, most thoroughly reprehensible person of all time. When Ward, Yardley, Jack and Charlotte come to talk to Hillary in prison about evidence and suchlike that might keep him out of the death house, Hillary could not remotely give a crap. He wants to insult the black guy and talk to Charlotte about her panties, and the rest of the world can go to a hot place and stay there. (No one but Charlotte appears to consider that Hillary’s actual guilt is in doubt, but as Ward observes, if he didn’t get a fair trial, then that’s beside the point.) Once you get past the outfits and the accent, I think Kidman plays Charlotte with all kinds of bravery, rendering her as a woman of false bravado, who is driven by doubt and fear and searching for something she’ll never find.

Efron is not called upon to do much, except lumber around in his underpants and look bewildered, both of which he does admirably. As for Matthew McConaughey, he gets to carve another notch in his career-comeback belt, playing Ward as a reserved boozer who keeps his secrets, a guy who fled his hometown for excellent reasons and has come back for what may be very bad ones. Dexter’s story is, if anything, overly shot through with cynicism about the justice system and newspapering and the failure and weakness that comes along with human desire. But Daniels’ film, rendered in almost pornographic detail – no, scratch the “almost” – by cinematographer Roberto Schaefer, is all about the atmosphere, the hum, the throb of white and black bodies roiling and roasting in the Southern heat, the warm splash of Nicole Kidman pee in our jellyfish-burned faces.