Romney's been intentionally vague about the price tag for his proposed cuts. But that number is the best anyone has 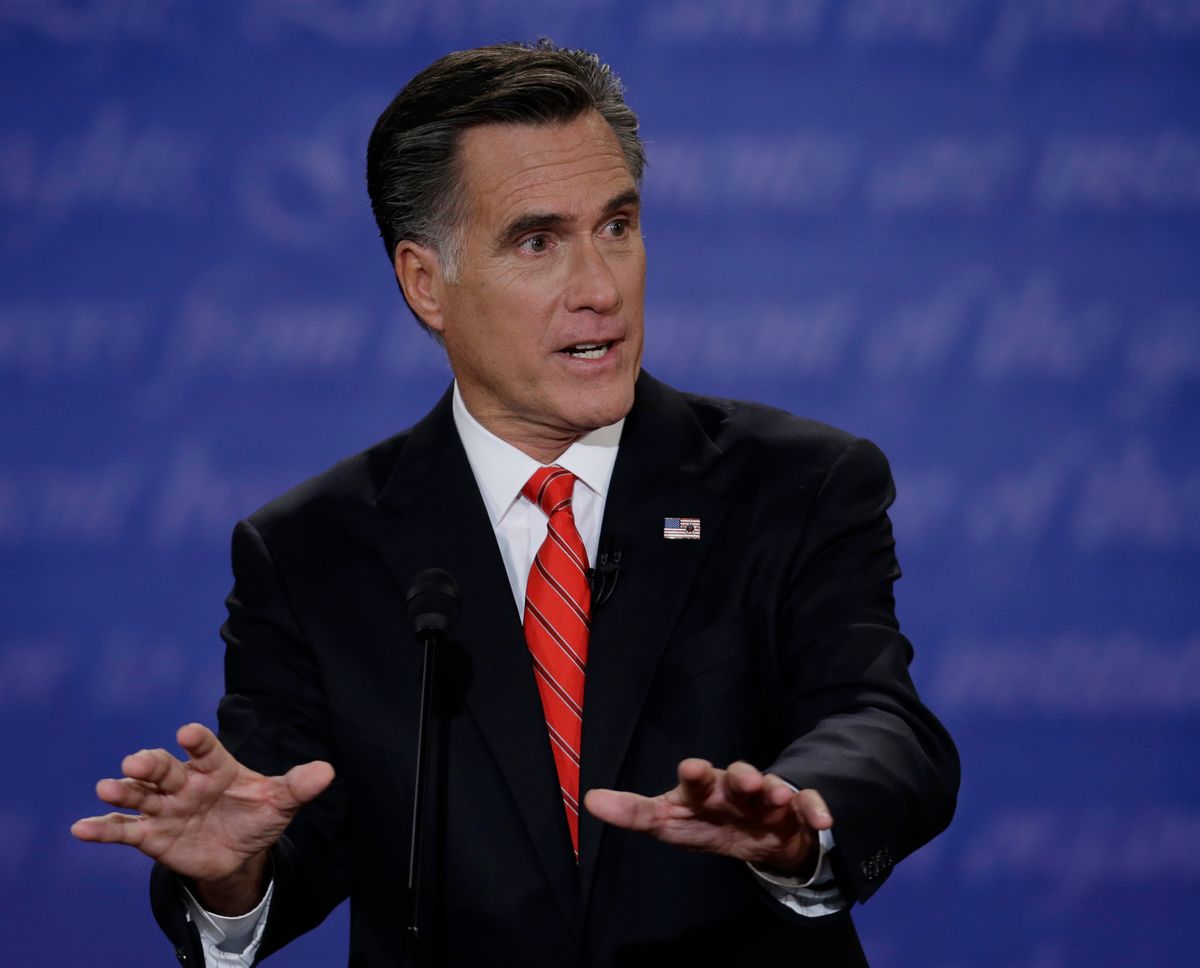 The first half hour of last night’s debate was focused on the tax plan Mitt Romney has been pushing since the GOP primary, and which President Obama accused him of abandoning last night. The key point of contention was the price tag for Romney’s plan, which Obama put at $5 trillion over a decade, a figure Romney disputed.

The number comes from a scoring by the nonpartisan Tax Policy Center, which found that Romney’s 20 percent across the board tax cut, along with his plan to eliminate the alternative minimum tax, would lead to $480 billion in lost revenues by 2015. The Obama campaign adds up the cost over a decade and gets to $4.8 trillion, which it then rounds up to $5 trillion. That number has been widely stated as fact in the media for months and has not been strongly contested by the Romney campaign.

But last night, Romney said of Obama’s charge, “I don't have a $5 trillion tax cut.” “So if the tax plan he described were a tax plan I was asked to support, I'd say absolutely not. I'm not looking for a $5 trillion tax cut. What I've said is I won't put in place a tax cut that adds to the deficit. That's part one,” Romney continued.

What was going on? Essentially, the candidates were talking past each other. Obama was speaking purely about the cost of the tax plan, ignoring whatever Romney would do to pay for it, while Romney pretended to not know the cost of his plan because he’s promised it would cost nothing in the end. He's said he would find enough offsets (most notably by eliminating tax loopholes and deductions) to make the plan “deficit neutral."

The problem for Romney is that he hasn’t said how he’ll do any of that. And that explains his reluctance to talk about the price tag. Because Romney won’t provide specifics, the same Tax Policy Center engaged in a hypothetical exercise to try to make Romney’s plan work. Starting with tax benefits that primarily benefit wealthy people -- Romney has promised not to raise taxes on the middle class -- TPC tried eliminating tax deduction after tax deduction and loophole after loophole to make up for the revenue lost through Romney’s tax cut. The problem, they found, is that there are nowhere near enough of these to pay for the plan. So they had to start cutting deductions that benefit increasingly less well off people and found that by the time they had eliminated enough deductions to pay for Romney’s plan, they had raised tax significantly on the middle class by eliminating deductions vital to middle-income earners.

Romney has dismissed the TPC study out of hand as a work of pure fiction and a partisan attack because one of its four authors used to advise the Obama administration. But Romney has yet to offer much of substance to explain why the offending analysis is wrong or to explain how he would pay for the tax cuts. Paul Ryan said Sunday that the math would take too long for him to explain.  “Now, you cite a study. There are six other studies that looked at the study you describe and say it's completely wrong,” Romney fired back at Obama last night after the president invoke the TPC study. Romney has recently added a sixth, but here’s what Politifact had to say in September about Romney’s “studies”:

Romney is using the word "studies" generously. Two items on his list are newspaper editorials that can be analytical but are rarely treated as independent research. One article comes from a campaign adviser, a connection that generally suggests a less than independent assessment.  That leaves just two reports out of Romney’s five ... We see no more than two independent studies out of the five claimed. We rate the statement Mostly False.

Of those two remaining studies, there are some serious questions about the assumptions they make about future growth and revenues. This is not to say they should be automatically dismissed, as Romney has done with the TPC study. Rather, the bottom line is that it’s hard for anyone to accurately predict what Romney’s tax plan would do because he’s been so intentionally vague about it. The experts are basically guessing at the moment, but we won't actually know how Romney will pay for his tax plan until he tells how he'll pay for his tax plan.