A dazzling, nightmarish Australian thriller of the '70s resurfaces at last, gruesome kangaroo hunt and all 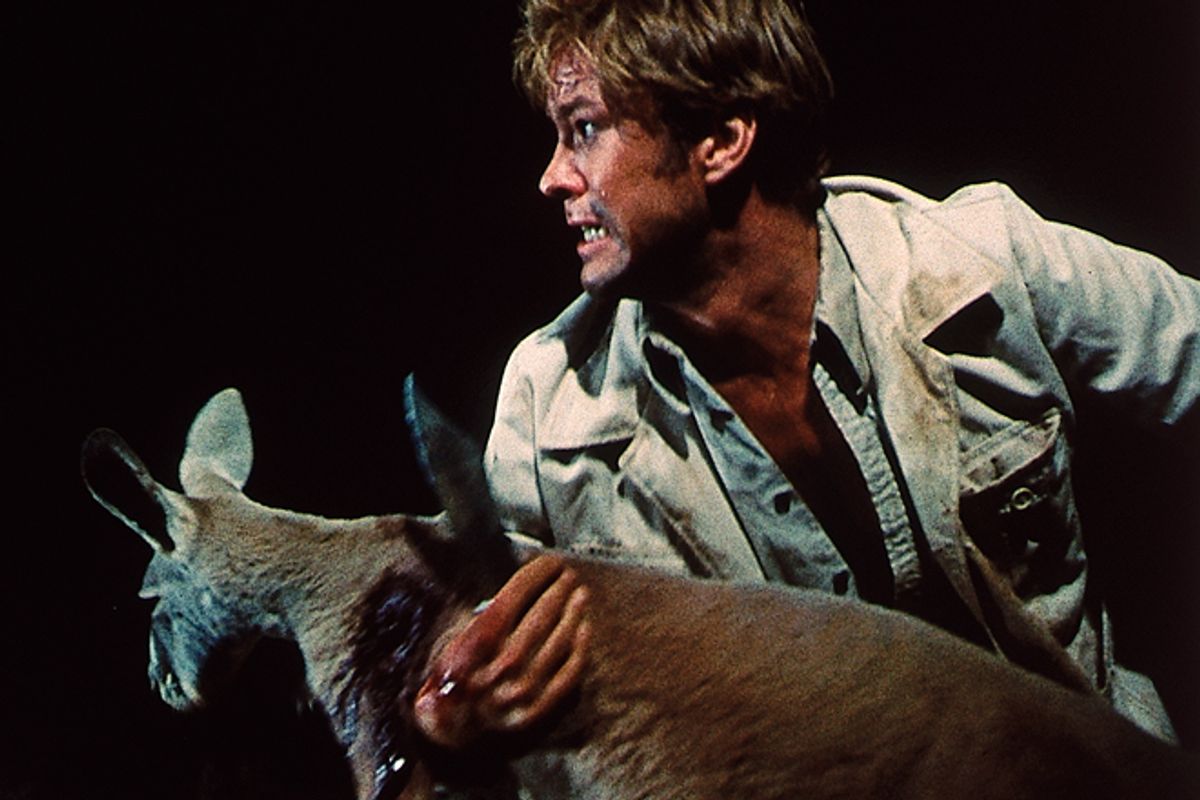 Australians really can’t blame the 1971 thriller “Wake in Fright” for widespread stereotypes of their country as a land of beer-soaked, brawling idiots and blast-furnace heat, because it’s hardly been seen outside its native land, and not seen at all in the United States since its butchered initial release (when it was retitled “Outback”). Down Under, director Ted Kotcheff’s nightmarish saga of a provincial schoolteacher’s descent into booze-fueled savagery remains a legendary and controversial Aussie classic, although it’s long been available only in poor-quality video releases.

After a decade-long hunt, the National Film and Sound Archive of Australia finally located the original negative of “Wake in Fright” in 2004 — at a storage facility in Pittsburgh, strangely enough — and embarked on a painstaking frame-by-frame restoration. The film that opens this week at Film Forum in New York, with numerous more cities to follow and home-video release after that, is vibrant with color, atmosphere, emotion, violence and dread. It’s simultaneously terrifying and hilarious, a full-on shotgun blast to the face of rediscovered 1970s weirdness, something like finding out that there’s a classic Peckinpah film you’ve never seen, or that Wes Craven and Bernardo Bertolucci got drunk in Sydney one weekend and decided to make a movie together.

I’d only heard about “Wake in Fright” by reputation — Martin Scorsese and Nick Cave have both cited it among their favorite movies — and you know what that can be like. How likely is it to be all that, if nobody’s ever heard of it? Isn’t this going to turn out to be some piece of accidental B-movie existentialism for geeked-out movie zombies, complete with actual footage of a kangaroo hunt? That’s true, by the way, and I both need to warn you and put that in context. They definitely couldn't put that usual boilerplate language at the end about how no animals were harmed during the making of this motion picture, because you see whole bunch of cute, hoppity examples of Australia’s most symbolic marsupial get blown away before your eyes. (Kotcheff’s defense: He filmed a licensed midnight ‘roo hunt that was happening anyway, and asked the hunters to do everything just as they usually would.)

But to get back to my question, “Wake in Fright” is a dark, sweaty, memorable voyage into hell, and the kangaroo slaughter is only the hallucinatory capstone. A Canadian filmmaker who spent most of his early career in England, Kotcheff went on to direct “The Apprenticeship of Duddy Kravitz” (which starred the 27-year-old Richard Dreyfuss), the football comedy “North Dallas Forty” and “First Blood,” which was Sylvester Stallone’s first Rambo film. (He also made “Weekend at Bernie’s,” believe it or not.) But nothing on the rest of Kotcheff’s long résumé suggests the muscularity and intensity, or the intermingled compassion and meanness, of “Wake in Fright.” Maybe it was temporarily uprooting himself to the Australian outback, where he couldn’t help but make a movie with a documentary feeling, and maybe it was Kenneth Cook’s novel (apparently quite well known) or Evan Jones’ screenplay. But at least for this one movie, this guy was brilliant.

The film’s lead is a handsome English actor named Gary Bond, sort of a Peter O’Toole knockoff of the time. He plays John Grant, a dapper schoolteacher who dreams of being a London journalist but must serve out his time in a flyspeck outback settlement, essentially to pay back his student debt. Trying to get home to his alleged girlfriend in Sydney over the Christmas holidays (which is to say the hottest part of the Australian summer), Grant stops off for one night, or so he thinks, in Bundunyabba, a midsize mining town with an airport. “The Yabba,” as its inhabitants all call it, calls forth all of Grant’s snobbery. It’s a dusty, blasted place where barely literate workingmen blow off steam while the women stay out of the way, and where a blackened steak in a greasy-spoon diner is the height of culinary excellence.

Grant’s air of superiority slightly baffles the men of the Yabba, like local cop Jock Crawford (legendary Aussie character actor Chips Rafferty, in his final role), but they don’t seem to mind buying him another round in hopes of loosening him up. In fact, “Wake in Fright” has tremendous integrity on that front: The friendliness and hospitality of the Yabba never wobbles; this isn’t “The Hills Have Eyes” or “Straw Dogs.” It’s all about whether Grant can learn to exist amid what he regards as barbarism. Only the defrocked physician turned professional boozehound Doc Tydon, played by the amazing English character actor Donald Pleasance, sees through Grant’s sardonic demeanor. “Farming out here is death,” Tydon informs him pleasantly. “Working in the mines is worse than death. You want them to sing opera too?”

No one in the Yabba forces Grant to lose all his money in an idiotic barroom gambling game (wonderfully captured by cinematographer Brian West) or wrestle an injured kangaroo mano a mano or engage in a couple of sweaty and unexpected sexual liaisons, one of which is interrupted by a bout of drunken vomiting. There’s arguably a curious Zen philosophy at work below the surface of this tale of endless debauchery; Grant needs to set aside his pretensions and bitterness, and learn to accept the friendship of sweaty, drunken men with shotguns and poor dental hygiene. Things end up well enough in this unforgettable movie (much better than I was expecting, or Grant either) – except, that is, for the kangaroos.