After a string of violent assaults across the country, a Toledo mosque becomes the newest target 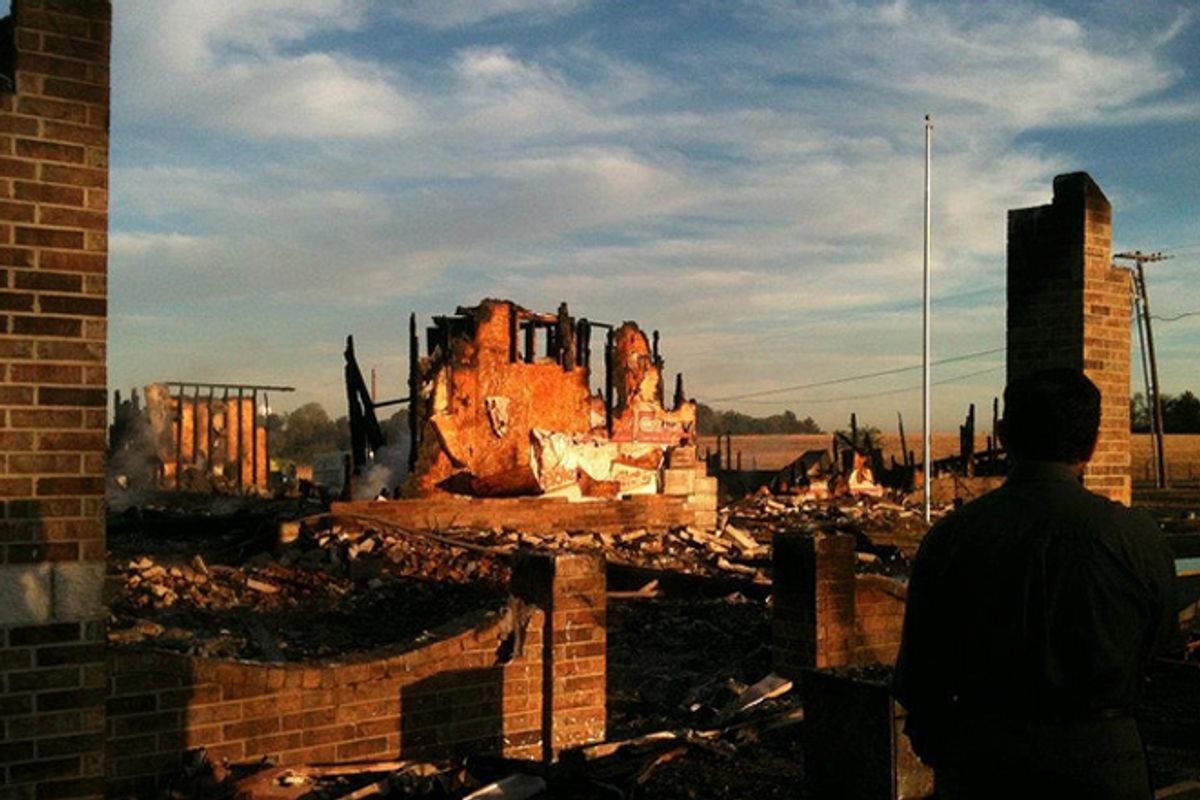 Muslims and their places of worship “are clearly under attack,” says the president of one of the country’s largest mosques, which was heavily damaged four days ago in an arson fire.

“We’re actually reeling in disbelief,” Dr. Mahjabeen Islam, president of the Islamic Center of Toledo in Ohio, told Hatewatch today in describing the devastation caused by a fire deliberately set in the mosque’s prayer area on Sunday afternoon, just minutes after worshippers had left the building.

“This is a hate crime,” said Islam. The mosque she heads is the third largest in the United States, a 70,000-square foot landmark, visible for miles, with 3,000 members who will celebrate the center’s 32nd anniversary on Friday.

The fire and water damage from sprinklers touched every room in the Islamic Center, causing an estimated $1 million to $1.5 million in damages. Repairs will take an estimated six months.

A suspect in the arson, whose image was captured on surveillance cameras, was arrested Tuesday in neighboring Indiana. On Wednesday, Randy T. Linn, a 52-year-old truck driver from St. Joe, Ind., was charged in Perrysburg, Ohio, Municipal Court with two counts of aggravated arson, aggravated burglary, and carrying a concealed weapon, the Toledo Blade reported in today’s editions.

“It was a very symbolic fire, we believe, in that it was started in the center of the prayer area right under the dome,” Islam said.

In August, during Ramadan, an anonymous, threatening letter was sent to the mosque with the word “stopped” written in Arabic.

“Never in our wildest dreams did we believe something like this would happen to us,” Islam said. “We are clearly under attack. If our mosque had not been made of brick and concrete, it would have burned to the ground.”

The fire also damaged and shut down classrooms of the Islamic School of Greater Toledo, a K-5 elementary school at the center. Those children are now attending classes at a nearby community college.

The FBI is investigating the arson, and federal hate crime charges may be forthcoming, Hatewatch has learned.

The Council on American-Islamic Relations (CAIR), the nation’s largest Muslim civil liberties and advocacy organization, says the arson is the latest in a notable spike in anti-Islamic hate crimes. CAIR released a report last month detailing the increase in attacks against Muslims and mosques.

During Ramadan, which started on July 20 and ended at sundown on Aug. 18, there was “one of the worst spikes of anti-Muslim incidents in over a decade,” the CAIR report says.

“We do feel this is part of an overall trend of attacks on mosques and not an isolated incident,” Julia Shearson, CAIR’s director for Northern Ohio, told Hatewatch.

“We believe there a climate that’s been created in the political sphere and the far-right media blogosphere that gives a green light to extremists to act out and commit hate crimes against religious institutions and their members,” she said.

"I don’t think we’ve seen this kind of intolerance toward religious minorities since before the civil rights movement.”

The CAIR official said civic and political leaders should consider convening a national summit on religious intolerance. “For some reason, it’s really been allowed to fester,” she said.

The growing list of anti-Islamic crimes includes the unsolved arson fire of another mosque in Joplin, Mo., that burned to the ground on Aug. 6. In Illinois, shots were fired at a mosque in Morton Grove, and an acid bomb was thrown at an Islamic school in Lombard. In Oklahoma, vandals fired paint balls at a mosque. In California, pigs’ legs were thrown at a mosque. In Panama City, Fla., a firebomb damaged a Muslim family’s home.

Sometimes, it appears, hate crimes have been directed at victims the perpetrators may have mistakenly believed were Muslims, when in fact they were members of another religious faith.

On Aug. 5, six members of a Sikh temple in suburban Milwaukee were gunned down by neo-Nazi skinhead Wade Michael Page, who belonged to a racist white-power band.

Also during this year’s Ramadan, an Arab Christian church in Detroit was vandalized.