“Call the Midwife,” the new PBS procedural, trumpets a loud message about class 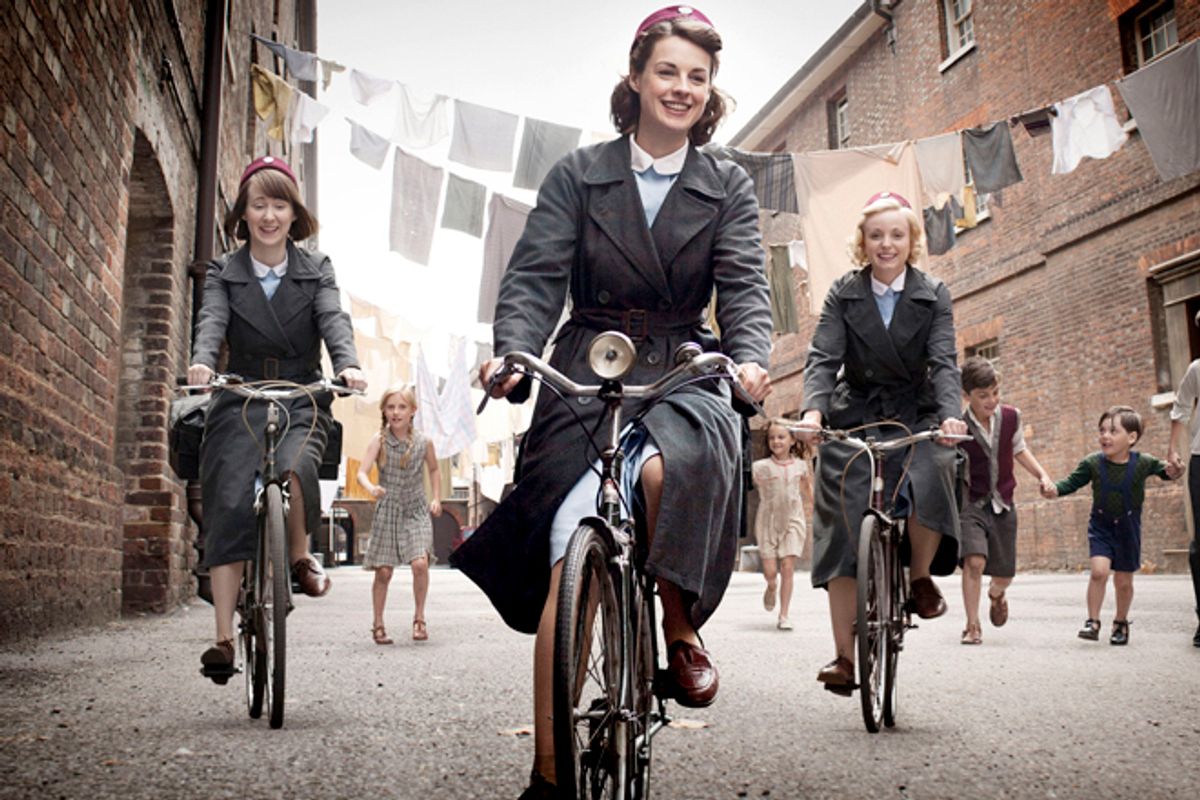 This image may only be used for publicity purposes in connection with the broadcast of the programme as licensed by BBC Worldwide Ltd & must carry the shown copyright legend. It may not be used for any commercial purpose without a licence from the rights holder. Â© Neal Street Productions 2011 (Laurence Cendrowicz)
--

When "Call the Midwife," a 1950s-set period drama about midwives working in a poor, post-Blitz London neighborhood, began airing in Great Britain in January, it quickly, and surprisingly, surpassed "Downton Abbey's" ratings. Last week "Call the Midwife" starting broadcasting on PBS in the "Downton Abbey" slot on Sunday nights, prompting many comparisons. As its creator put it to the New York Times, "We have nuns, enemas and quite a lot of ladies removing their undergarments. ["Downton Abbey" doesn't] have any of those, as far as I'm aware. But both shows are funny, and involving and make a big thing out of afternoon tea." They also have opposite, if equally simplistic, messages about class.

"Call the Midwife," based on a memoir of the same name, stars the lovely, blank Jessica Raine as Jenny Lee, a freshly minted midwife, coming off a debacle of a love affair, who begins to work in the impoverished East End. Jenny works and lives in a convent, cohabitating with a number of wacky nuns — think of an understated, stiff-upper-lip, period-drama version of the "Sister Act" gang and you're pretty much there. Less singing, just as many quirks — and three other non-nuns. This trio of midwives includes the plain one, the dramatic one and the standout, Chummy Browne (Miranda Hart), an outsize, awkward, lovable and supremely posh woman, a galumphing, game oddball who deserves a spinoff of her own.

Despite its period trappings, "Call the Midwife" is, at baseline, a procedural. In each of its six episodes, the midwives contend with a "case of the week." It's the 1950s, so the patients don't have birth control, the midwives don't have heavy machinery, births take place at home amid intense poverty, but audiences will recognize medical story lines from shows like "ER," "House" and "Grey's Anatomy." There is the breach baby, the baby born to a much older mother, the baby that should have died but was rescued by love, the missing baby and even that great paternity mixup staple, the black baby born to a white father.

I don't mean to insult "Call the Midwife" by calling out its procedural nature — I am doing so to point out its priorities. "Call the Midwife," like all procedurals, is in a fundamental sense about work, about the routine of getting up every morning and doing a job. On most procedurals that aren't "Law & Order," the professional becomes a backdrop to the personal, but it is still work, not love or leisure, that order the series' rhythms.

Nearly the opposite is true of "Downton Abbey," in which half of the characters' only job is to enjoy their leisure time. "Downton" has been widely criticized for this, the argument being that "Downton" is beloved by audience's inner conservative, the one that longs for a simpler time when the rich were rich (and had British accents and lived in gorgeous estates) and took care of the working class and everyone knew their place. "Call the Midwife" is about a world that is less hierarchical, more fluid and more dangerous than "Downton's." It's a world in which women and the poor are largely fending for themselves. It neatly sidesteps the period-drama charge of burnishing the rich and the status quo by refusing to make either look so damn good.

Instead, "Call the Midwife" burnishes the poor. Jenny and the other midwives — from much more well-to-do backgrounds than their charges — are constantly talking about how their impoverished, often ignorant patients are the brave heroes, and they, the midwives, just witnesses to that bravery. It's a sweet, well-meaning and patronizing sentiment. "Call the Midwife" is almost the liberal mirror image of "Downton Abbey." It is set in a female, lower-class world where rigid social structures have broken down — the characters wander by blitzed-out buildings and men who can't find jobs — and the poor, middle-class and rule-breaking rich have to do for themselves. Screw the benevolence of the establishment upstairs, huzzah for the innate wisdom and kindness of the downtrodden.
Whichever of these sentiments you prefer on your television is a matter of taste. (Which you take up as a principle is a matter of politics. They don't have to match.) I find that I prefer my escapist oversimplifications of class dynamics to focus on the vagaries of romance, and not work, and to take place on a beautiful estate and not a dimly lit nunnery. Or maybe it's just that I prefer the untouchably imperious Lady Mary to the wishy-washy good girl Jenny Lee. But until we can have Lady Mary back, Jenny will do.