Can I date a Republican?

I was attracted to the spark of our debates. But now, political differences are threatening to destroy the romance 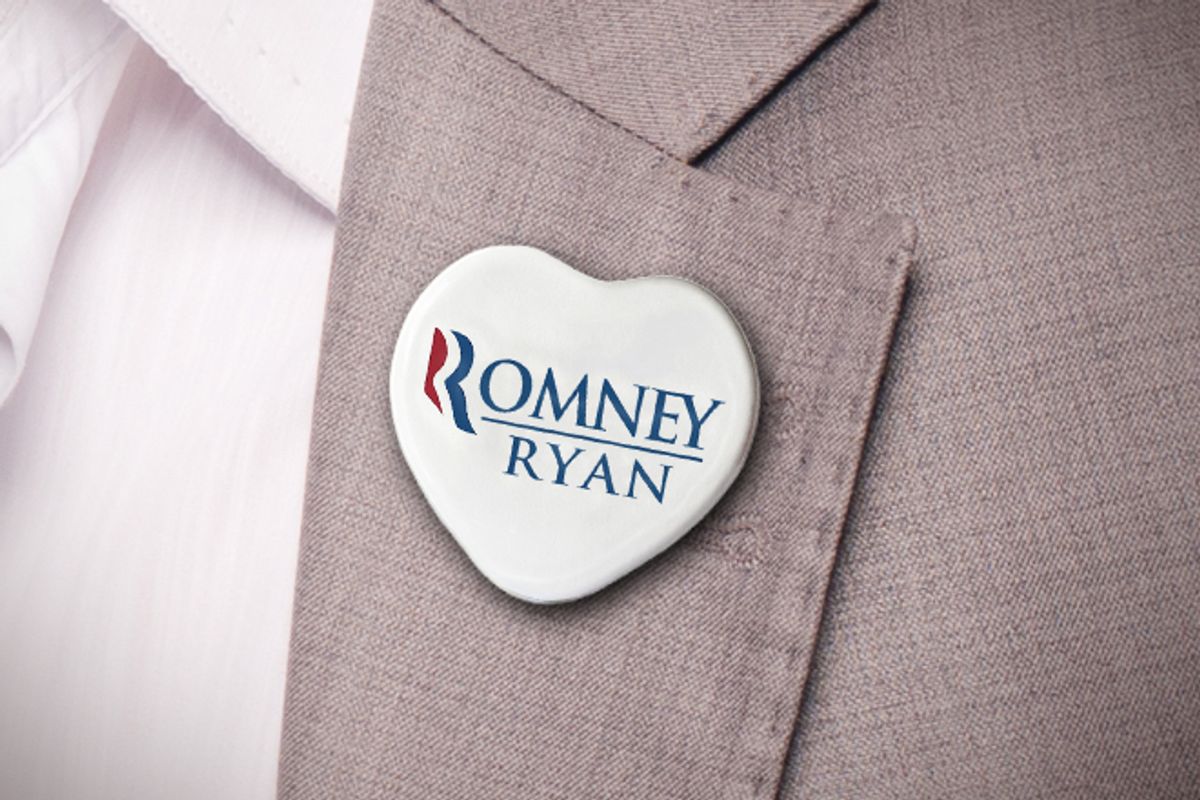 I met the guy I’ll call Nick at a New Year’s party last year. He was tall, good-looking with a short haircut and strong jaw line. He smiled at me and, emboldened by a little champagne, I introduced myself. He was an Army veteran of Iraq, and I assumed he was a Republican, but that didn’t deter me. Hey, he was cute.

I’m an avowed liberal, actively engaged in politics and elections. I volunteered for the Democrats in 2006 (to oust Rick Santorum) and Obama in 2008. But I often find myself drawn to men of the opposite party. Maybe it’s the forbidden nature of it, the secret thrill I feel knowing that my friends would never date a Republican. Maybe I’m attracted to strong men with stronger opinions. Maybe I just like a challenge.

That night, I did not hide my political leanings from Nick. “I’m a liberal, Prius-driving vegetarian who voted for Obama. Still want to talk to me?” He laughed and said yes.

We hit it off immediately. Two months after we met, he told me he loved me. We went on a cross-country road trip over the summer, and we called each other soul mates. But my friends were skeptical. They had seen my previous relationships with conservatives. We’d start out hot – bantering with each other, clashing over every little thing – but the fundamental incompatibilities would prove too strong eventually, and the relationship would crumble.

Things were different with Nick, though. He liked my conviction. He appreciated that I saw the world differently. After one heated debate, I asked him why he loved me.

“You’re a breath of fresh air,” he said. And I liked feeling that we both kept an open mind. I almost felt smug about how well we fit. None of our friends could have a bipartisan relationship like ours.

But the endless election cycle of 2012 is proving a bit of a challenge for our cozy across-the-aisles romance. The sparks of our debate – which can be so thrilling – have more recently been tipping over into brawls. Not long ago, I posted an Obama Facebook picture, and he immediately responded with a post from the RNC. This escalated into a spat that fortunately ended in a truce: No more posting about politics online. But the opportunities for battle these days are endless. I’ve always enjoyed a political season, but I’ll be so glad when this one is over.

Outside of the voting booths, Nick and I actually have a lot in common. We’re both passionate. We’re both opinionated and like intellectual challenges. “We’re not that different,” I told him on one of our first dates, which he liked to remind me of every time I accuse him of being stubborn. And it’s true: We both like a good fight.

And the challenges he offers to my own perspective have been a breath of fresh air for me, too. I recoiled when he showed me his two expensive assault rifles. I grew up in a gun-free household. Guns were for “other” people. And yet, here I was dating a bona fide gun expert, a former Specialist in the army who trained recruits on proper gun handling and safety. I was nervous at first, but Nick was so thorough and careful and loving with that gun. He pointed out every detail on his new rifle with awe and respect, and even let me hold it. What can I say? I found it sexy.

At the bar, Nick and his friends would engage me in ethical and political discussions during late-night games of darts, and his crew quickly nicknamed me “Libby.” (I’m not even sure they know my real name anymore.) Nick was one of the least conservative of the bunch; he believed gay marriage was none of our business and didn’t pretend he understood the complexities of women’s healthcare. Most of my Democratic friends were back in Pittsburgh, where I went to college, so I was alone in a sea of Republicans in the surprisingly conservative suburbs of Los Angeles. But I was surprised to find that I loved it. I had long sparring matches with the guys about gay marriage and big government. Getting one of those strong-willed men to admit defeat was a thrill in itself.

But there is a fine line between spirited debate and an all-out brawl, and sometimes we barreled over it. Like the time he asked me if I had ever been a member of the ACLU. I said no, but my best friend had been the chapter president in college. “Oh,” he said, with disgust in his voice, as if I had told him she was the president of a puppy mill.

Or the time we were cuddled up on the bed watching “Lost” and starting talking about who was president in 1977 (Carter). That kicked off a conversation about Reagan, one of his favorites, which led to my championing FDR, which led to him grumpily rolling off the bed and heading outside.

I followed him. “How could you not love FDR?” I asked, but of course: He was the creator of the New Deal.

We were polar opposites on the topic of federal programs, but I couldn’t resist pushing him on it. Nick believed it wasn’t the government's place to pay for welfare and other social programs because they could be abused and stimulate dependency. He wanted them all gone. But I couldn’t believe his flippant attitude toward Pell grants and the new healthcare law -- something I personally benefited from. His stance felt like a personal attack, as if he were dismissing me.

"What about the GI bill, then?" I said, just trying to provoke him. “Why do you feel entitled to the money for your engineering degree?”

"That's different," he said, flinching at the word "entitled." "I earned it."

"Did you, really? You were paid to do a service. Why do you think the government owes you anything more?" I didn't really believe this, but I’d become too invested in winning the argument. "How are you any different than people on welfare using the government to help them out?"

His eyes narrowed, and I knew I’d gone too far. "Don't compare me like that ever again.”

For the next two hours, we devolved into an argument that went deep into crazy-town. There were comparisons to Karl Marx, conspiracy theories of the liberal media, the bias of Fox News, insults here, low blows there. Then he said something that crossed the line.

"Everything I have is better than the socialism you believe in." He had said the dreaded S-word. A conservative slur, a word with so much venom he might as well have called me a dirty commie. For him, it had added disdain: Nick was born in Soviet-occupied Hungary and retained bad memories of that government. It was one of the worst insults he could throw at me.

I lost it. I jumped up and down, hissing at him, "I am not a socialist! If I'm a socialist, you're a fascist!" It was not my proudest moment. But he made me furious. He had collapsed all my opinions and worldviews into a box labeled “stupid” and dismissed it entirely. I felt misunderstood and inconsequential. And for the first time, I felt a little bit hopeless about us.

“Do you think we can even work?” I asked him, finally. A question I’d been afraid to give voice to, since we first started getting serious.

Nick took a puff of his cigarette and stared at me. “Are you insane? I love you!”

And he was right. We loved each other. Our fights weren’t about politics, really. They were about my own insecurity. I was the one steering the conversation into fraught territory more often than not. I was the one pushing him to see how far our arguments could go. I was second-guessing myself and hitting him with unfair comparisons. I was all over the place, because what really unsettled me was a much deeper fear: I was scared that he would see the real me, and he would bail. Like other guys I dated. And so all my provocations, the times I lashed out at him were a kind of defense against the end I feared was inevitable. If he did leave, if it didn’t work, I had the perfect excuse. Of course we broke up. He’s a Republican.

And so, I began to practice restraint. Just because you can find something to argue about, doesn’t mean you should. Nick and I still differ on many topics. I think buying guns is a ridiculous waste of money. He thinks the same thing about my Prius. All couples face these differences of opinion, in some form or another. We may not work out -- but I don’t think it’s the voting booth that will tear us apart.

On Nov. 6, even though our votes will cancel each other out, we're going to vote anyway. And we’ve agreed in advance to another truce: Whoever wins, there will be no gloating. It’s good practice for the future. If we make it through this election, there could be many more.

Ashley Laub is a writer, researcher, and producer in Los Angeles. She blogs at TheZenProducer.com.