What the presidential candidates aren't talking about

So why aren't the five most important issues even being discussed in Election 2012? 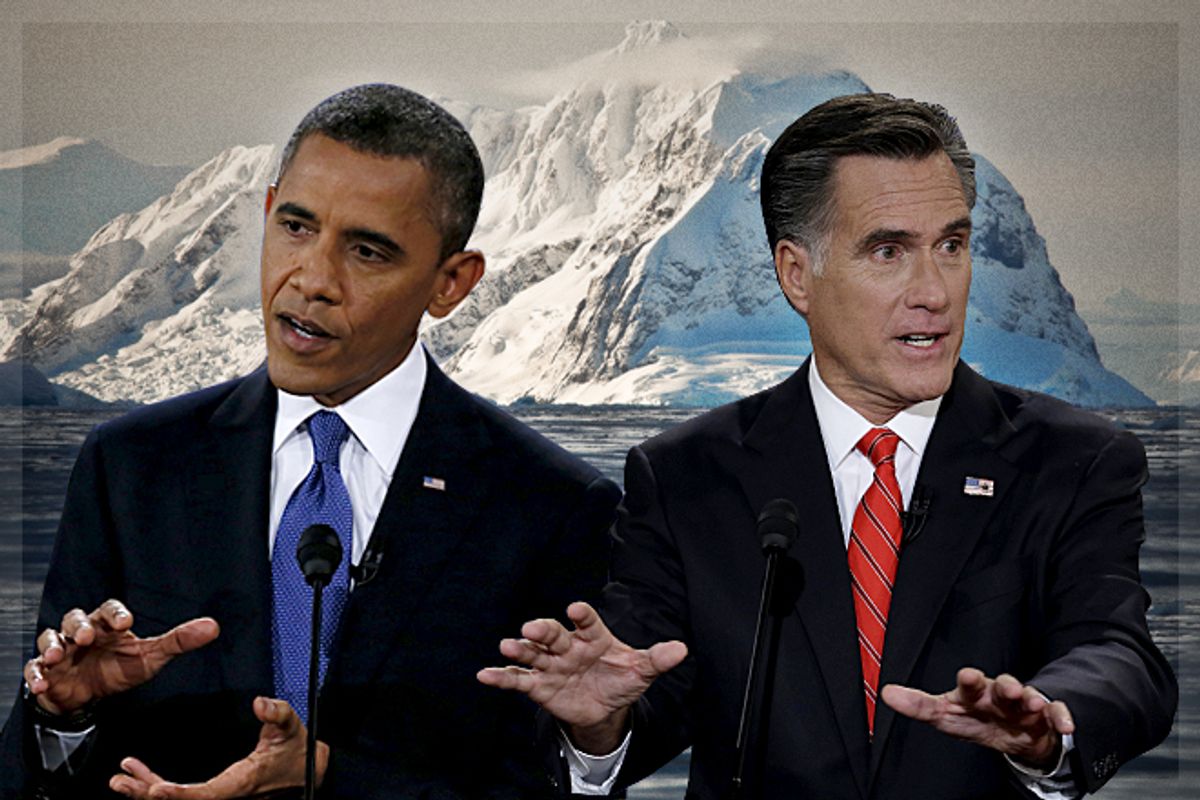 It's the second decade of the 21st century, and a lot of heavy shit is going down. But you'd hardly know it from following the presidential campaign. Here we are, five weeks away from Election Day, and the attention of the political world is overwhelmingly more focused on arcane debates as to the significance of the "internals" of the latest swing-state poll than on questions of where the candidates stand on some of the most important issues facing American citizens.

For wonks and stat-heads, the fact that we live in the golden age of poll analysis must be endlessly satisfying. And to be sure, complaints about excessive horse-race coverage accompany every modern American presidential election. We're a nation of fans who want to know who is winning, nanosecond by nanosecond. But in 2012, priorities seem particularly skewed. The Arctic ice cap melted to a historic low this summer, but neither presidential candidate has uttered more than a peep about what may well end up being humanity's defining challenge in the decades to come. Twelve moviegoers died in a hail of gunfire in Aurora, Colo., just three months ago, and the words "gun control" are never mentioned. The war in Afghanistan just finished its 11th year, and yet somehow did not merit a single word in Mitt Romney's address at the Republican convention. In the first presidential debate on Wednesday, supposedly devoted to domestic policy, we heard not a single word on abortion, immigration, crime, the Supreme Court or the death penalty.

So here's a reminder -- a review of a handful of the most important issues that should be front and center in this election campaign, but aren't.

Climate change. August was the fourth hottest month globally since records started being kept in 1880, according to the National Climatic Data Center. The vanishing Arctic ice cap has been well documented. Accelerating ocean acidification, propelled by the absorption of carbon dioxide emissions, threatens the health of the entire global seafood chain. The evidence that man-made global warming is remaking the world's climate just keeps accumulating.

And yet, bizarrely, there appears to be an inverse relationship between higher temperatures and political heat. In 2003, John McCain co-authored a bipartisan bill calling for regulations that would limit greenhouse gases. By 2008, McCain had renounced his previous global warming activism, but the necessity of doing something about climate change was a regular part of Obama's stump speech. This time around, we're more likely to hear Obama touting increased oil production during his first term than anything substantive about reducing carbon dioxide emissions.

Afghanistan. The 12th anniversary of the invasion of Afghanistan is almost upon us. Two thousand Americans have died in combat, with more than 17,000 wounded. According to the U.S. Defense Department, to date, the war has cost $1.2 trillion. Two weeks ago, the "surge" in combat forces authorized by Obama came to an end. According to the military's own report card if the goal was to break the back of the Taliban, the surge was an abject failure. The Taliban appears as strong as it was before the surge, the Afghan troops trained at huge expense by the U.S. are now turning their guns on their supposed allies, and there is little confidence that the situation will improve in any meaningful way by the time of the scheduled withdrawal of all U.S. troops in 2014.

Afghanistan, in other words, is a debacle. In another era, it would be front-page news and the challenger would be hammering the incumbent every single day on the disaster -- as Obama did on the topic of Iraq in 2008. And yet, the most we've heard from Romney (after Afghanistan's complete no-show during the Republican convention) is actually identical to Obama's policy: "Our goal should be to complete a successful transition to Afghan security forces by the end of 2014. "

Poverty. Listening to both candidates talk about their agenda for the next four years, one could be excused for thinking that America is a country divided into two classes: middle and rich. The words "poor" or "poverty" rarely, if ever, escape their lips. The closest we came during the first presidential debate was Romney's repeated references to the growth in the number of Americans who receive food stamps.

The fact that the number of people living in poverty has been rising steadily since 2000 in the richest county on the planet is an indictment of both political parties. Neither the Bush tax cuts nor the Obama stimulus has made a dent in the worsening standard of living for the least-well-off Americans, but still, the rhetoric of both parties focuses almost exclusively on the middle class. It's no mystery why: In the United States, the poorer you are, the less likely you are to vote. But that doesn't make it any less of a travesty.

Drone wars. On Sept. 26, Atlantic.com writer Conor Friedersdorf sent an uncomfortable frisson through left-wing circles with an essay "Why I refuse to vote for Barack Obama," which cited the administration's terrorizing of "innocent Pakistanis" via drone targeting of suspected terrorists in northwestern Pakistan. Friedersdorf referenced a report compiled by the Stanford International Human Rights & Conflict Resolution Clinic and the Global Justice Clinic at the NYU School of Law that documents the distressing collateral damage inflicted on Pakistanis by the drone campaign.

Drones hover twenty-four hours a day over communities in northwest Pakistan, striking homes, vehicles, and public spaces without warning. Their presence terrorizes men, women, and children, giving rise to anxiety and psychological trauma among civilian communities. Those living under drones have to face the constant worry that a deadly strike may be fired at any moment, and the knowledge that they are powerless to protect themselves. These fears have affected behavior. The US practice of striking one area multiple times, and evidence that it has killed rescuers, makes both community members and humanitarian workers afraid or unwilling to assist injured victims. Some community members shy away from gathering in groups, including important tribal dispute-resolution bodies, out of fear that they may attract the attention of drone operators. Some parents choose to keep their children home, and children injured or traumatized by strikes have dropped out of school.

It is certainly fair to argue that if the current incumbent were Republican, his Democratic challenger would be attacking the drone wars as incompatible with American values -- along with other terrorism-related apparent civil liberties violations, such as the Obama administration's position that it has the right to conduct extra-judicial assassinations of American citizens.

But don't expect drones to pop up as a line of attack at any future debates. One of the reasons why some issues that would normally be part of a presidential campaign to-and-fro are invisible this year is that Obama, particularly on foreign policy, has staked out positions so far to the right that he is immune from attack by Romney. Romney's advisers have been urging him to, if elected, "rescind and repeal" Obama's ban on enhanced interrogation techniques -- aka torture. A candidate mulling over whether to reintroduce torture is unlikely to critique drone targeting of terrorists, whether they are American citizens or not.

Gun control. In 2010, the last year for which data are available, there were 31,672 gun-related deaths in the United States. The last 18 months have witnessed three high-profile shootings, the Tucson attack on Rep. Gabby Giffords, D-Ariz., in January 2011; the Aurora, Colo. massacre in July 2012; and the mass shooting at a Sikh temple in Wisconsin in August. In the wake of the Aurora shootings, ABC News reported that "the gun murder rate in the U.S. is almost 20 times higher than the next 22 richest and most populous nations combined."

But there's a pretty simple answer as to why gun control has not been an issue in the 2012 presidential campaign. Obama's response to the high-profile shooting incidents that have occurred during his term has been to take no action. Romney's response would be the same. With no difference between the two campaigns, there's nothing to cover.