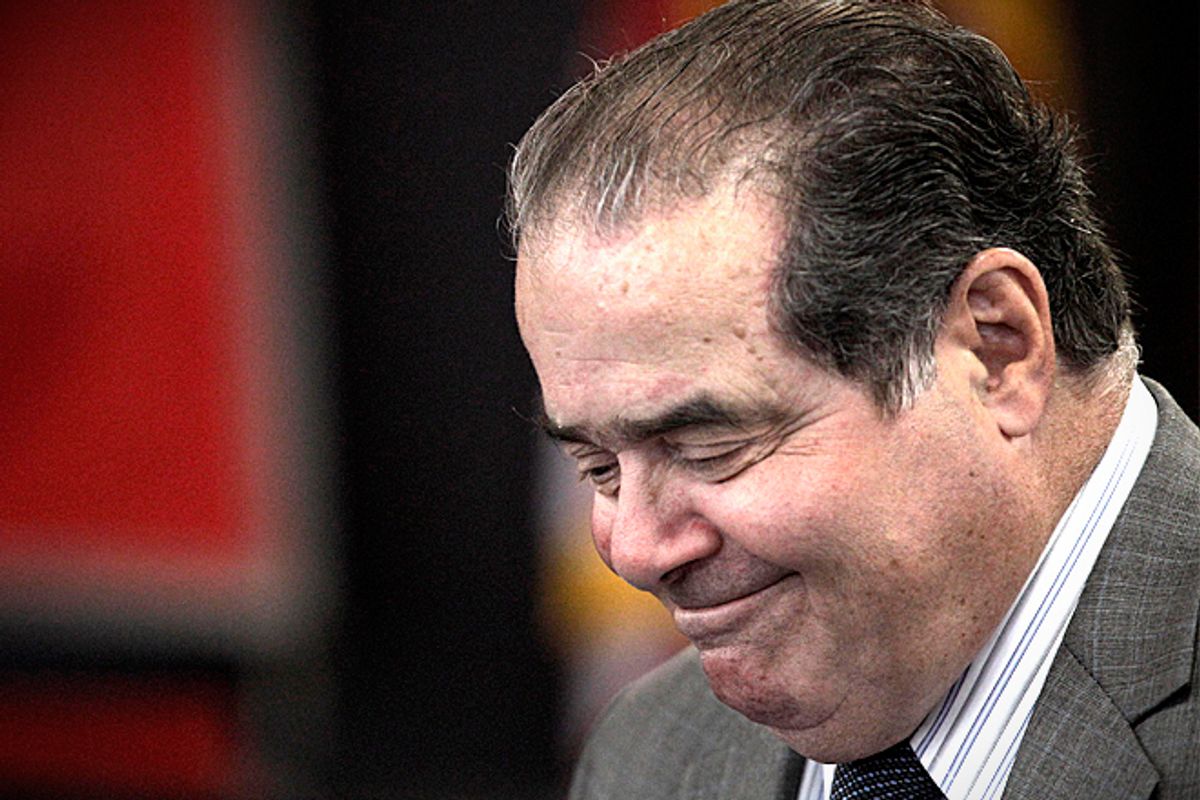 Antonin Scalia isn't sweating it. At a book reading and lecture at Washington's American Enterprise Institute this week, the 76-year-old associate justice of the Supreme Court of the United States and self-described "textualist" entertained the crowd by rattling off a litany of his top judicial no-brainers.

"The death penalty? Give me a break. It's easy. Abortion? Absolutely easy. Nobody ever thought the Constitution prevented restrictions on abortion," he said. "Homosexual sodomy? Come on. For 200 years, it was criminal in every state." And then he went to bed that night and slept like a baby.

Scalia's breathtaking nonchalance doesn't come as any huge surprise to anyone familiar with the Roe v. Wade–opposing, affirmative action–blocking, death penalty–loving Reagan appointee's strict interpretation of the Constitution as an immutable template of American justice. In the past, he's argued that "the risk of assessing evolving standards is that it is all too easy to believe that evolution has culminated in one's own views." He affirmed that belief at the Enterprise Institute Event, contrasting his style with those justices who would believe "'the Constitution means exactly what I think it ought to mean.' No kidding." And he reiterated that citizens who believe in change on such issues as abortion or the death penalty should take it up with their elected officials — or go ahead and try to change the Constitution, adding darkly, "It is very difficult to adopt a constitutional amendment." Surprisingly, he didn't finish this statement with a sinister BWAHAHA flourish, but it was implied.

It takes a special kind of man to shrug off challenges to death penalty and abortion restrictions with nary a care in the world about how his interpretations of text might affect real human lives, and to use the phrase "homosexual sodomy" in 2012. Give him this, though: He's consistent, down to his language. In 2003, when the Supreme Court struck down Texas sodomy laws in Lawrence v. Texas, paving the way for a more widespread dissolution of similar statutes in other states, Scalia wrote the dissenting opinion. At the time, he argued that "nowhere does the Court’s opinion declare that homosexual sodomy is a 'fundamental right,'" adding, "It is clear from this that the Court has taken sides in the culture war, departing from its role of assuring, as neutral observer, that the democratic rules of engagement are observed. Many Americans do not want persons who openly engage in homosexual conduct as partners in their business, as scoutmasters for their children, as teachers in their children’s schools, or as boarders in their home. They view this as protecting themselves and their families from a lifestyle that they believe to be immoral and destructive."

I'm not a Supreme Court justice, but sorry, who here was taking sides in a culture war? Who here thought "evolution has culminated in one's own views"? Because I'm seeing a pot that couldn't begin to fathom how black he was. Still can't. And nine years ago, Scalia crowed in his dissent that "we need not fear judicial imposition of homosexual marriage," so one may wonder if today, underneath his swagger, he's just a teensy bit fearful about those homosexuals and their homosexual sodomy getting homosexual married all over the place. Oh, the times, they are evolving.

Scalia may be a relic, not merely ferociously determined to refuse to modernize but equally committed to making it look easy. But you've got to hand it to a man whose devotion to what he perceives as our country's founding values is so rock solid that he's content to be living fully in the 18th century.