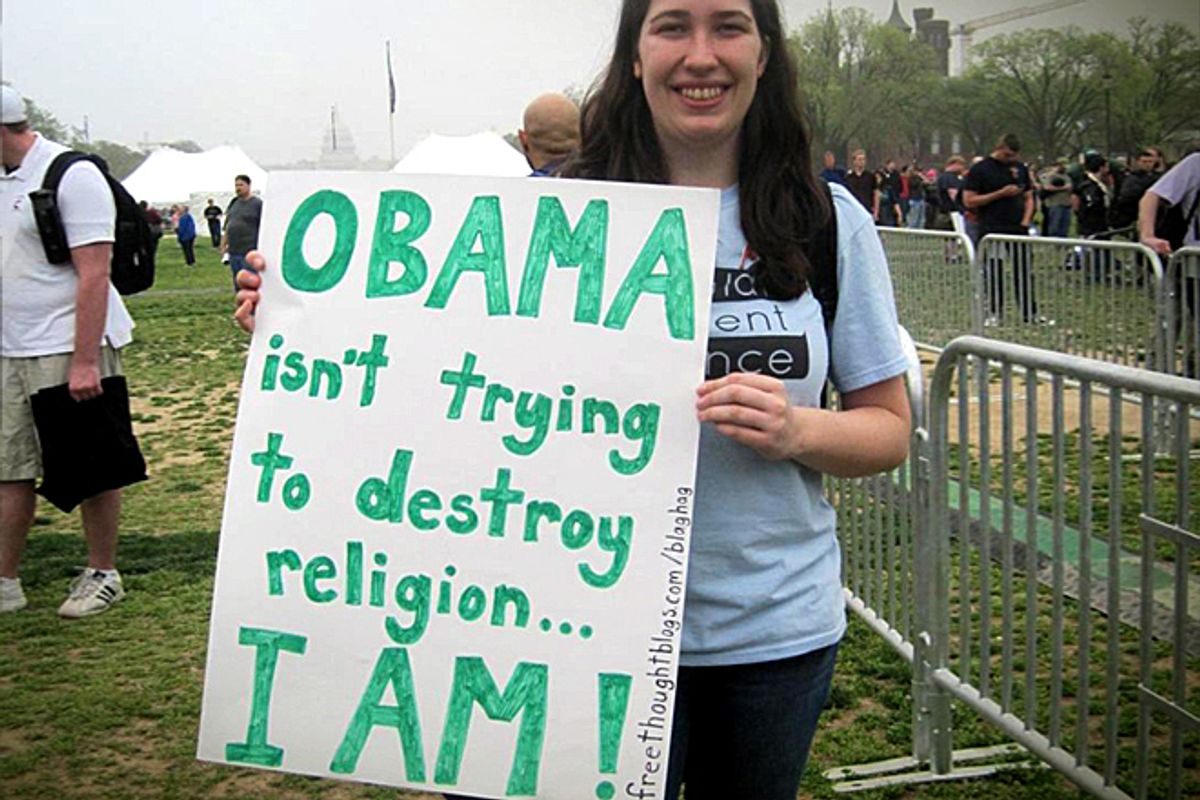 In the last decade, atheism in America has risen from a tiny, demonized fringe to a serious presence in the public and political arenas. The latest polls show that almost 20 percent of Americans now identify as non-religious, and the atheist movement -- a loose coalition of skeptical, rationalist and humanist groups -- is making inroads everywhere from high school campuses to the halls of Congress. Last March, as many as 20,000 American nonbelievers braved cold and rain to gather on the National Mall for an event called the Reason Rally, with a lineup of prominent speakers that ran the gamut from student activists to elected officials.

As the atheist movement gains numbers and prominence, it's inevitably been forced to confront questions about what it ultimately seeks to accomplish. Some in the movement favor a narrowly defined set of goals: defending the separation of church and state, keeping creationism out of science classes, protecting atheists from job discrimination and prejudice. But other atheists, while not opposing these goals, see things more broadly.  They note that the religious-right lawmakers who promote creationism and state-church entanglements are also rabidly opposed to equality or legal protection for LGBT people; try to ban abortion and contraception, or throw obstacles in the path of women seeking them; sermonize that global warming must be a hoax because God wouldn't let the planet change that much; advocate a social-Darwinian worldview where the rich have unlimited power and the poor get nothing but societal neglect and harsh repression.

And then, there's a growing recognition that we have problems within our own community -- a realization that atheists, like every other group of people, include sexual predators, bigots and defenders of privilege, and that giving up religion doesn't necessarily erase these harmful attitudes. For example, at the Women in Secularism conference in February, it emerged during a panel discussion that there's an informal network of atheist women who warn each other about which prominent atheist men to avoid.

All these debates had been simmering in the atheist community for months, but they boiled over a few weeks ago in response to a post by Jen McCreight, a graduate student, secular activist and blogger in Seattle. Until then, she had been best known for "Boobquake," a tongue-in-cheek response to an Iranian cleric who fulminated that "immodestly" dressed women cause earthquakes. Treating this as a scientific hypothesis, she invited women around the world to join her in wearing racy clothing for one day to measure precisely how much of God's wrath it unleashed. At first it seemed like lighthearted fun in support of a good point, but she wrote that it had encouraged some men in the atheist community to view her as a sex object, rather than a person with ideas worth taking seriously:

What I originally envisioned as an empowering event about supporting women's freedoms and calling out dangerous superstitious thinking devolved into "Show us your tits!" I received sexual invitations from strangers around the country. When I appeared or spoke at atheist events, there was always a flood of comments about my chest and appearance. I've been repeatedly told I can never speak out against people objectifying or sexually harassing me because a joke about my boobs was eternal "consent."

McCreight announced that she was sick and tired of this treatment, and called for a movement to advocate for an explicitly social justice-oriented flavor of atheism. This call immediately drew an enormous, enthusiastic response: The ensuing discussion ran to almost a thousand comments, the overwhelming majority of which were highly positive and supportive. In the discussion, one commenter suggested a name for this new movement which rocketed to prominence: "Atheism+," pronounced "Atheism Plus," or just "A+" for short.

The animating idea behind Atheism+ is that atheism isn't a stopping point, but a beginning. We're atheists not because we want to gather and engage in collective back-slapping, not because we want to chortle at the foolishness of benighted believers, but because we care about creating a world that's more just, more peaceful, more enlightened, and we see organized religion as standing in the way of this goal. We consider politically engaged atheism an effective way to demolish this obstacle, to refute the beliefs that have so often throughout human history been used to excuse cruelty, inequality, ignorance, oppression and violence. (Full disclaimer: I identify as a member of A+ and as a proponent of social justice.)

What's more, we refuse to believe that skepticism and critical thinking can be usefully applied only to claims about the supernatural. We believe that it's equally valuable to apply them to real-world power structures that perpetuate inequality and injustice. Thus, the goals of Atheism Plus: We are atheists and skeptics, plus we defend women's rights and reproductive choice, plus we fight against sexism and racism, plus we oppose homophobia and transphobia, plus we call for equality of opportunity and economic fairness, and so on.

Atheism+, like most other social justice causes, is a leaderless, spontaneous, grass-roots movement. It has no board of directors, no chief executive officer who sets policy or issues binding decrees. It has no official agenda or creed to which all members are required to subscribe. It's a group of people who are united by a general commitment to social justice, nothing more, and even within that general rubric, there's a lively, freewheeling debate on what exactly that means and which causes we should advocate.

The groundswell of enthusiasm for Atheism+ shows that the idea tapped into a widespread sentiment within the atheist community. Many of the people who stepped forward to count themselves among its ranks declared that it was exactly what they had been waiting for. As of this writing, there's a dedicated forum on Reddit with over 1,700 members, and its own discussion site with similar numbers (granted, there's probably substantial overlap). One of the first group initiatives is A+Scribe, a volunteer project to provide transcriptions of pro-skepticism video and audio for deaf and hard-of-hearing readers.

While Atheism+ has already seen allies flock to its banner, it has its detractors as well. The most common complaint heard from some quarters is that A+ is "divisive," that it causes us to waste valuable time and energy on infighting rather than accomplishing the goals we all have in common. However, this is a classic example of how privilege makes it easy for people to overlook barriers that don't personally affect them. The truth is that the atheist movement is already divided, and has been for a while: Surveys show that there's a significant imbalance of men over women. Some of this may be due to outside cultural factors, but some of it is surely owing to the experiences that many women have spoken out about: belittling language and condescension, unwanted sexual advances, outright harassment, and sometimes violent abuse and threats when they speak up about the other things that make them feel unwelcome.

When this kind of behavior goes unchecked, it's no surprise that many women will choose not to participate in the atheist movement. (In fact, shortly after the post that gave birth to A+, Jen McCreight announced that she was taking a hiatus from blogging due to the volume of vicious insults and threats she almost immediately received.) Atheism+ isn't creating division, it's an effort to fix an already existing division by lowering the barriers to women's participation in the atheist movement. The widespread adoption of anti-harassment policies at most major atheist conferences, as well as the series of atheist leaders speaking out against hate directed at women, are a good start, but there's much more progress to be made.

The other major complaint is that A+ is fostering a black-and-white, with-us-or-against-us attitude among its adherents. This, too, is easily disproved by perusing the A+ forums and discussion threads. There are many prominent atheists who choose not to identify with A+ for various reasons, and there's no chorus of demands that they be blackballed. Nor do we expect that every existing atheist organization will take on the full range of social-justice issues. What we do expect is that all atheists will treat each other with basic respect and decency, and that we'll do whatever's reasonably in our power to make the movement as welcoming and diverse as possible, without giving up the vigorous, sprawling debate over ideas that defines us.

For many atheists, the events leading up to the formation of Atheism+ have been one dispiriting experience after another, as the depths of hate that have been festering among us have emerged into public view. It's clear there's a small subset of people within the atheist community, mostly but not exclusively male, who are driven into a raving fury by the idea that there should be any limitations on people's behavior or that we should undertake to make our movement more diverse. It's unlikely that we can rid ourselves of these people entirely; but at the very least, we hope to ensure that the larger community won't sanction their behavior, regard it as acceptable or tacitly condone it by saying and doing nothing.

Most important, we want to be clear that this isn't a problem unique to atheism. On the contrary, it's something that's happened over and over through history as once-fringe ideas move into the mainstream and become more diverse. As this article on io9 notes, other conferences are having these same fights, which may well mean that feminism and social justice are ideas whose time has come. The A+ movement is just one part of that broader cultural current. Our hope is that, by making our spaces more feminist-friendly and justice-conscious, we can do our part to help push that wave forward in society at large.