Papers like the Village Voice once defined urban cool. Their time is gone -- and so is part of each city's soul 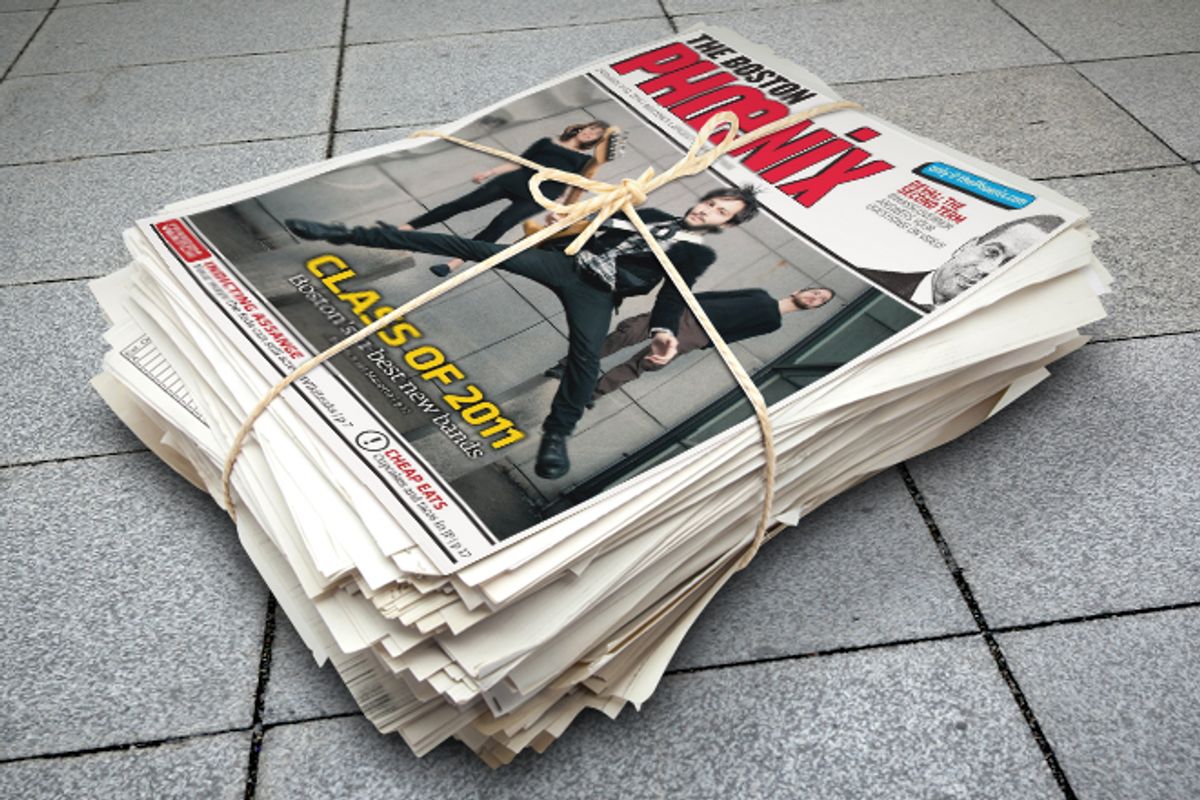 Two weeks ago, the 46-year-old alternative weekly the Boston Phoenix vanished in a puff of newsprint, leaving in its place a new publication called simply The Phoenix, a news-culture-lifestyle magazine as glossy as the new condominium buildings sprouting in once working-class Southie. The city's name -- the sense of place -- simply disappeared. The loss was a long time for coming.

For decades, alt-weeklies have been giving hell to incompetent mayors, evil developers, and lapdog city council members with the kind of righteous rage lots of us eventually outgrow. "It's the best damn journalism in America outside of a monthly national magazine," says Fran Zankowski, president of the Association of Alternative Newsmedia (AAN).

But alt-weeklies weren't just good journalism. For a long time they were also, as former Village Voice columnist Rosie Gray recently put it in an article posted on Buzzfeed, "the voice of the city and of a certain kind of New Yorker." Or a certain kind of Bostonian, or Chicagoan or San Antonian. Their trademark mix of edgy culture and political coverage all but defined the mentality of a particular urban dweller -- but also defined the city itself. "Simply to be seen with the [Village] Voice set you apart," wrote New York magazine in 2005 of the paper's heyday. "You were one of those people -- hair too long, mouth too smart, not likely to go to the prom."

"Those people" still inhabit cities, but the local alt-weekly is rarely their voice. In Buzzfeed, Gray attributed this (in New York, at least) to the Village Voice's current "frat boy" management: "They're not Voice people," she writes. (There also are not many people left at the Voice; defining writers like Robert Christgau, J. Hoberman and most recently music editor Maura Johnston have all been let go.)

That may be the case, but as David Carr pointed out in the New York Times, the Internet is also to blame. "[T]he Voice that was 'the voice of the city' has not existed for many years," he wrote, and indeed, there have probably been as many stories on the downfall of the alternative press as there have stories predicting the end of "Saturday Night Live."

I don't want to rehash that debate: Chain ownership, Craigslist, and the rise of great city and cultural blogs have all slowly claimed pieces of the alt-weekly soul over the years. The papers themselves share plenty of the blame; too many of them have become indistinct listings guides. But the loss of the city weekly also says something important about the way we create our own communities now.

The same technology that's created what Carr calls an informational ecosystem of micro-targeted online publications has also splintered the city scene itself. Thanks to social media, today a renegade urban beekeeper in Atlanta might feel more connected to the renegade urban beekeepers in Detroit than to her own city's general-oddball population. And, of course, blogs make it harder for one writer to have the authority of a Christgau, but they open the door to many diverse voices instead.

"It's harder to be the voice of one larger community now that everybody can put up a blog post," says Zankowski. But the larger urban community itself has become less cohesive. People will always identify with their cities, but the congregation of loosely affiliated urban tribes that alt-weeklies used to collect under one umbrella are now reaching out to each other across the globe instead.

It's ironic that the style in which they're doing so arguably originated with alt-weeklies themselves. At this year's annual AAN convention, keynote speaker Matt Thompson of NPR asserted that "alts invented the voice of the Internet" with their "bombastic voices and personal narratives" long before the first modems screeched out their 300-baud connections.

For evidence, see Norman Mailer's very first column for the Village Voice, a delightfully weird, acidic and self-referential blog-post-on-newsprint from 1956. It's not all that different from what you'd find today on, say, The Awl, a blog of semi-random ephemera, much of it a funny, insidery take on life in the city. Likewise, sites like Gothamist churn out content about "news, arts, events and food, which are similar to the metro buckets that the alt-weeklies covered in their heyday," says Gothamist co-founder Jake Dobkin.

Dobkin grew up in New York and considers the Voice "an important and early influence ... Nat Hentoff, Wayne Barrett and Tom Robbins were particularly respected and influential in the pinko Commie circles my parents circulated in." And while Gothamist isn't explicitly political, its editorial attitude is distinctly alt-weekly-ish: suspicious of rich developers and mayoral grandstanding, supportive of Occupiers and bicyclists, fascinated by neighborhood skirmishes, crime narratives and the downtown music scene.

If anything, it's blogs like these that are carrying forth the freewheeling urban voice, while many alt-weeklies have started to feel bizarrely uptight. Media reporter Mark Leccese lamented last month on the Boston Globe's web site that the once-youthful Phoenix had begun to sound "stodgy" (the Globe calling the Phoenix stodgy being the ultimate cop-buddy-movie role reversal). David Carr noted that the Chicago Reader's sale to the Chicago Sun-Times (a.k.a. The Man) "would have been unthinkable" not too long ago. And I remember when, a few years back, the Village Voice did something that made me feel it had lost the pulse. For a cover story about squatters, it ran a page-one photo of a young, "homeless" punk-rock couple, impeccably styled for the part -- a bit too impeccably. Sure enough, in tiny type on the table of contents: the names of the two paid models.

For better or worse, a constellation of blogs and websites, and not a single weekly paper, are the new "voice of the city," a chorus instead of a megaphone. But if alt-weeklies no longer provide a unified voice for a certain breed of urbanite, a few are still doing something that very few blogs attempt. "Curated journalism," says Zankowski. "Long-form narrative stories and true investigative enterprise journalism that costs a lot of money and takes a lot of time."

It was L.A. Weekly's Christine Pelisek who learned, after months of dogged reporting in low-income neighborhoods that rarely see a reporter, that a series of murders in the city were in fact the work of a serial killer. The Stranger, Seattle's alt-weekly, won a Pulitzer Prize this year for its haunting story of a rape and almost-double murder -- the reporter later said that an alt-weekly was "one of the rare and lucky places" that would accommodate such a piece. Portland, Ore.'s, Willamette Week exposed the state's former governor as a child molester in 2004.

These are the stories blogs will link to but, as of now, rarely report on their own. (There are many that publish scoops, but they're usually quick hits and not oriented toward any one city). Jill Stewart, L.A. Weekly's news editor, says the paper's relationship with these blogs is highly symbiotic. "We steal ideas from them," she says. But, "It's a very limited world you're going to get from most of the bloggers. We're the opposite -- we're looking for stuff, scanning the horizon, seeing what pops up."

As for the city's daily, the Los Angeles Times: "They're still stuck in very traditional coverage," she says. "They've never broken away from, 'This is boring, and we're here to bore you.' They fundamentally try to neaten things up and make it look more rational than it is. These institutions of Los Angeles -- the city council, the school board -- are actually fascinating groups of people. They're at war with each other, they're up to no good, there are heros. They're organically interesting."

Dobkin admits that sites like Gothamist are nowhere close to accomplishing the reporting the alt-weeklies do -- yet. "Of course, there's still more we need to do, particularly with long-form and enterprise reporting, but as our budgets grow, that stuff will come," he writes in an email. "I just hope in 50 years (!) I can say that we've had as much of an impact on New York (and on our other cities) as the Voice had while they were around."

"While they were around" -- that's gotta hurt. But if the past tense is a bit premature, it's true that no single media outlet -- not a paper, not a blog -- really speaks for "those people" anymore. At least not in media-saturated Los Angeles or New York. But Zankowski, who is also the CEO of the Colorado Springs Independent, insists that in a smaller city like his, the alt-weekly can still be a force. "Come to Colorado Springs," he says. "Come see how this city has changed because of a paper like ours."

The city is changing, all right. How long such papers can be a part of those changes remains to be seen.