Gore Vidal told you so

The prolific writer and activist passed away in July, but his political wisdom is both prescient and timeless 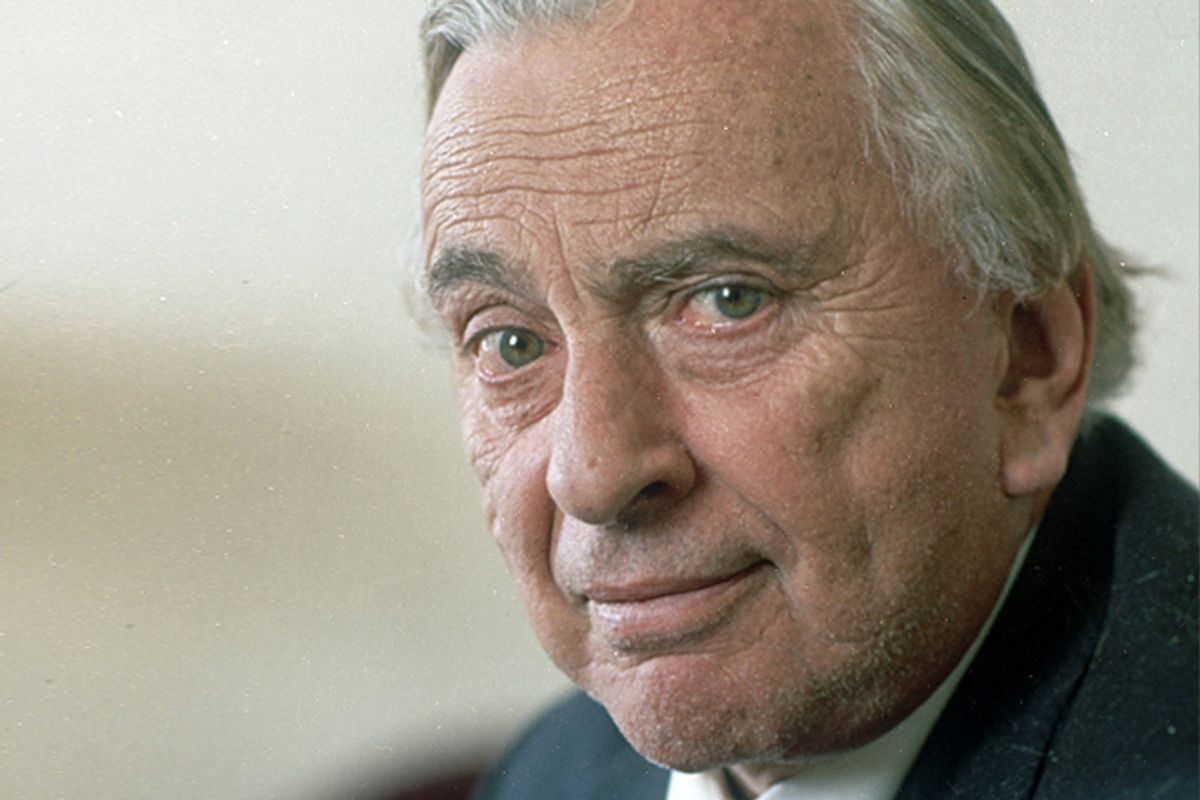 Excepted from "I Told You So: Gore Vidal Talks Politics, Interviews with Jon Wiener"

This past summer, we lost Gore Vidal, one of our greatest intellectual treasures at a time when we needed him most: during the 2012 presidential election. In a forthcoming book of interviews — which date from 1988 to 2007 — that Nation contributing editor Jon Wiener conducted with the witty and acerbic writer, activist and fiercely loyal Democrat, Vidal holds forth on oil, the unholy matrimony of corporations and politicians, the Israel-Palestine conflict, and war and Wall Street. Even though he's speaking of the past, Vidal's insights and anecdotes are equally, if not more so, applicable today.

Vidal on gas and oil:

The only optimists are the gas and oil people, and they have every reason to be. It has always been the trick of our republic to get people to vote wholeheartedly against their interests. That’s very exciting when you can do it. [Laughter.] I remember when I was running for Congress in upstate New York, in Dutchess County, and there would be these farmers going around in old, old Model-T Fords and so on, with stickers — Vote for Rockefeller. Sometimes I would stop them, and we’d chat. I’d say, “Why do you like him?” because he was pretty poisonous even then. They said, “He’s so rich, he wouldn’t steal our money.”

I said, “That wouldn’t stop him. Rich people go right on robbing people, you know." He was spending a lot of money up in Albany. He has his grand pyramid, he has his sphinx, all types of things up there to remind people of the Rockefellers. And I couldn’t get a straight answer out of them.

I asked, “Do you think you’ll get a check out of him someday? Or [that] he, like his grandfather, [would] give you a dime?” A lot of people up there could be bought for a dime. I remember when I was running for the House, Republicans since time immemorial had bought votes in the district. And the price had gone up in 1960 to about $15, which is a hell of a lot of money up there. And particularly in nearby Tivoli, which I lived not too far from.

My campaign manager was Judge Hawkins, a wonderful guy. He was head of the Democratic Party up there. He said, “They’re going to beat us because of the bought votes.”

And I, a perfect Populist, said, “Why don’t we buy them, too? Just pay a few dollars more?” I understand the workings of the market. That’s how it works. That’s why I proposed myself for office in the great republic, for deals in the business. He said, “They always catch us, they never catch them.” And that man was a judge.

Vidal on Wall Street and war:

My generation has been through the Depression and then World War II. We were far from being the greatest generation, but we were certainly the most tribulated. Then it was over, and I remember thinking as I got out of a bus near Times Square, “Well, we don’t have to do that again. We’ve had our war.” Little knowing what time would yield.

All the arts were booming. It was just the most exciting time. New York was the center of the world — the center for painting, which it had never been before. There were things which had never been accessible to us which we suddenly became masters of, because there was all this energy left over from the war. I think a lot of us who had not gone to college had time to get going in the arts, which is what you should be doing at that age. So everything was glittering. Even TV, which was brand new and was loathed by many, but we thought something good might come out of it. And something did: live television drama, which was often, quote, “better than Broadway.”

So here we were, right on the edge of a golden age, all prepared to go, to make civilization, something the United States has never done. We were all dressed up with nowhere to go. Then in 1950, Harry Truman was looking forward to the Cold War, with a new enemy: Communism. He gets us into a disastrous war with Korea, which we promptly lose. And we have been at war ever since, and it has not done our character much good, and it hasn’t been good for business either, except for Wall Street. That's what I say to the golden age. It was there, in ovum, but you have to sit on the egg, not step on it.

On corporate money in politics:

There isn’t one person in America who has ever thought about politics who doesn’t know that every single member of Congress is paid for by corporate America, and it isn’t to represent the people of their state, it is to represent corporate America’s interests, which are not those of the people at large. So, they’ve given up on the idea of having representatives in Congress. They see two candidates this year [Gore and Bush] who, whatever their plusses or minuses, represent nothing at all that has to do with the people. These are people who go to fundraisers, who create fundraisers. Bush became the Republican candidate because he has the same name as a failed president, and he got $70 million on the strength of that from corporate America. Gore is running neck and neck with him. So, that system is over.

On Israel and Palestine:

Jon Wiener: On the Jewish question, your article “The Empire Lovers Strike Back” in The Nation offended many people. Podhoretz says to Vidal, “To me the Civil War is as remote and as irrelevant as the War of the Roses.” Vidal writes, “I realized then that he was not planning to become an ‘assimilated American,’ rather, his first loyalty would always be to Israel.”

Gore Vidal: Let’s look it up. What I wrote is always shaded this way and that way in order to change the meaning. It’s been so shaded now that I am supposed to have said that all Jews are Fifth Columnists. Now here’s the exact sentence: “‘Well, to me,’ said Poddy, ‘the Civil War is as remote and irrelevant as the War of the Roses.’ I realized then that he was not planning to become an ‘assimilated American,’ to use the old-fashioned terminology, but, rather, his first loyalty would always be to Israel. Yet he admits that they ought to remain among us in order to make propaganda to raise money for Israel, a country they don’t seem eager to live in. Jewish joke circa 1900: A Zionist is a someone who wants to ship other people off to Palestine.”

I had this out with my old friend Norman Lear, who said “you can’t say 'assimilated.'” I said, “Come on, you started People for the American Way. Well, which are you? If you’re not going to be an ‘assimilated’ American, then what are you? Are you an Israeli who happens to be living here?”

My argument is only weak at one point: What on earth does Vidal care about nationality? I hate the nation-state. What am I doing saying you’ve got to be either a good American or a good Israeli, but you can’t be both? Why not to hell with both of them? That would demolish my argument.

But no Jew can do that, at least none who like Israel, because they have to protect this peculiar little state. So, instead of hitting me where I really am weak, they get hung up and try to talk about anti-Semitism. Which has nothing to do with it.

But you’re also talking here about a historical consciousness of the American past, which is increasingly rare.

That may have to do with my age and class and background, but you can’t expect me not to be.

You’re absolutely right. But look at the context of my essay: The Podhoretzes are giving out marks for Americanism. They write about me, “He doesn’t like his country.” That’s the standard neocon line about all liberals. “Well, one thing is clear in all this muddle, writes Midge [Decter], adrift in her tautological sea, “Mr. Vidal does not like his country.” They talk about me not liking my country, but they have no interest in the Civil War — or, I suspect, in the United States except as Israel’s financier.

On being a master of the obvious:

I had taken on the whole establishment of a pretty rustic country and said “Fuck you, you’ve got sex all wrong.” Thus, I found my role. I exist to say, “No, that isn’t the way it is,” or “What you believe to be true is not true for the following reasons.” I am a master of the obvious. I mean, if there’s a hole in the road, I will, viciously, outrageously, say, “there’s a hole in the road and if you don’t fill it in you’ll break the axle of your car.” One is not loved for being helpful. So my radicalization begins with "The City and the Pillar."

Excerpted from "I Told You So: Gore Vidal Talks Politics. Interviews with Jon Wiener." Forthcoming in November 2012, by OR Books. Copyright (c) Jon Wiener, 2012.

Gore Vidal is the author of more than 38 books, the most recent of which is the novel "The Smithsonian Institution."