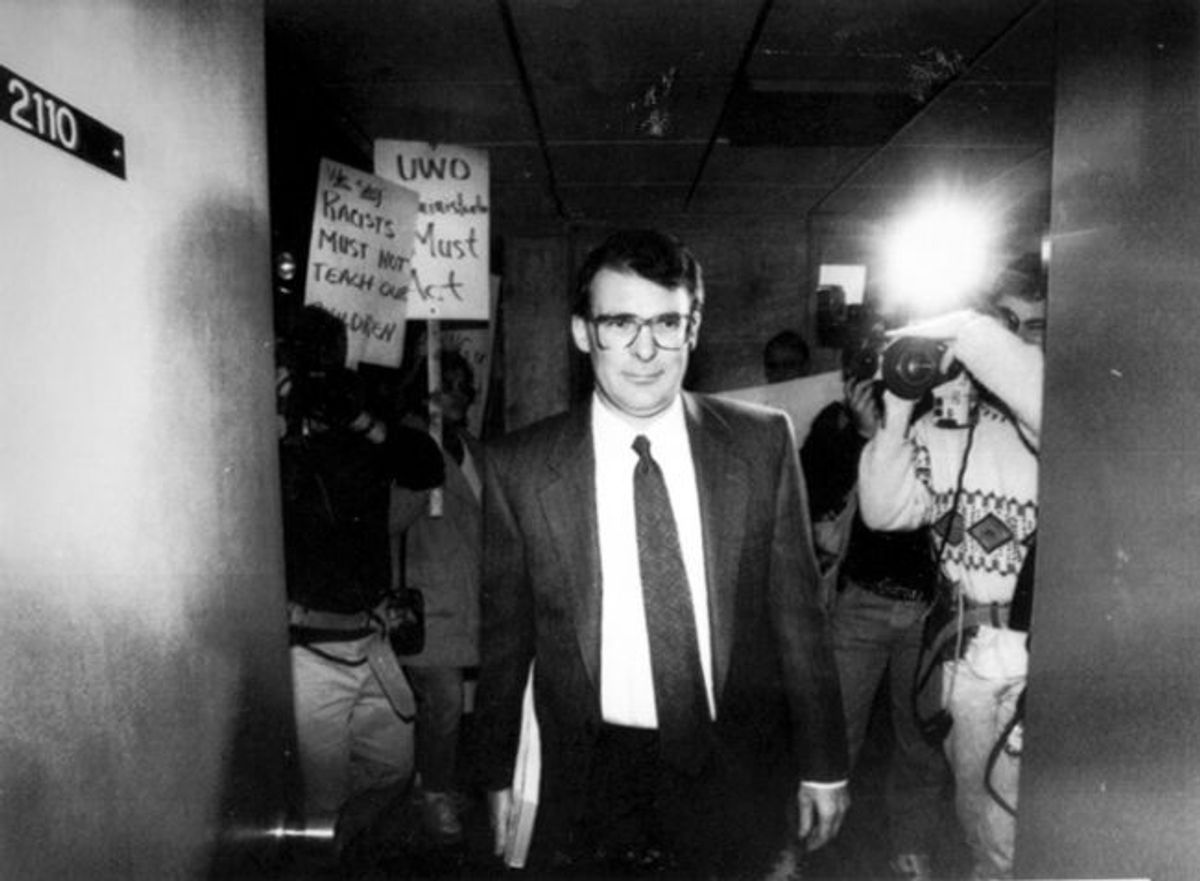 Jean Philippe Rushton, a psychology professor and probably the most important race scientist in North America, died of cancer Tuesday night in Canada. The man who sparked a firestorm of controversy and protest in the late 1980s with his theories about the correlation between genital size and intelligence, and in later years was the head of a right-wing fund that has long supported the research projects of academic racists from around the world, was 68.

“He’s the end of an era of academic racists of his style and notoriety,” Barry Mehler, professor of history and director of the Institute for the Study of Academic Racism at Ferris State University in Michigan, said today. “I don’t think we’ll see that again.’’

That’s not to say that academic racism has died, only its most prominent elder.

Rushton taught psychology at the University of Western Ontario for 25 years and began his academic career investigating the basis of altruism – why one person sometimes aids another, even at personal risk. But it was in the fields of biology and genetics, academic disciplines unrelated to his training, that Rushton made his biggest mark — and left his largest stain.

Rushton’s infamous theory about race and intelligence can be summed up in two words: size matters.

He postulated that brain and genital size are inversely related, implying that whites are more intelligent than blacks and that Asians are the smartest of all.

Saying that Rushton’s ideas were “monstrous” and “simply do not qualify as science,” David Suzuki, an actual geneticist, debated Rushton on the Western Ontario campus in 1989 before 2,000 students and more than 100 reporters and television crews. Security was tight inside and out of the auditorium.

“I did not want to be here,” Suzuki told the audience. “I do not believe that we should dignify this man and his ideas in public debate.” A few minutes later, he added, “There will always be Rushtons in the world. We must be prepared to root them out.”

Brian Timney, dean of social science, which includes the psychology department where Rushton actually worked, said Rushton’s legacy “was not a great one.” “His research was not highly thought of,” Timney said. “I work in neuroscience and I expect some academic vigor. He was not vigorous.”

The dean said while the university refused to fire Rushton, he was removed from the classroom for at least a semester during the height of the uproar in 1989.  ”There were so many protesters gathered outside his door, he couldn’t get in or out,” Timney said. Rushton delivered his lectures via videotape.

While Rushton may still be a big name in race science circles, at Western University “he sort of disappeared off the radar a long time ago,” the dean said.

Mehler also debated Rushton that year. The men appeared together on “The Geraldo Rivera Show.” “Is There a Master Race?” was the title of the segment.

Mehler remembers telling Rivera and his audience, “I have a Ph.D. from the University of Illinois in institutional racism. I am an expert at recognizing racism when I see it. Rushton is a racist.”

Rushton kept his cool and soon he was red hot in the world of academic racists.

“He was very photogenic,” Mahler said today. “He never got flustered. He became the focus and the spokesman for the academic racists.”

But no matter how calm and cool Rushton was on the talk-show circuit, Rushton was pushing old-fashioned racism. “I couldn’t believe what I was hearing,” Mehler said.

While simultaneously defending his academic freedom, University of Western Ontario officials twice reprimanded Rushton for conducting research on human subjects in 1988 without required prior approval, according to a Southern Poverty Law Center profile of Rushton. In the first incident, Rushton surveyed first-year psychology students, asking questions about penis length, distance of ejaculation and number of sex partners. In the second, he surveyed customers at a Toronto shopping mall, paying 50 white people, 50 black people and 50 Asians five dollars apiece to answer questions about their sexual habits.

Rushton took his ideas on the road in 1989. He presented his views to a meeting of the American Association for the Advancement of Science.

It did not go well.

Association officials called a news conference the same day to attack what the association’s president called Rushton’s “highly suspect” research. A spokesman for the AAAS, Earl Lane, said Thursday: “For now, I think we’ll have to just say that the quick actions of the association officials, in holding a press conference to refute Rushton’s research and his ‘highly suspect’ views, speak for themselves.”

Not everyone saw Rushton that way.

In a 1,219-word tribute to Rushton upon his death, Greg Johnson on the North American New Right website said what he admired about “good old Phil’’ was his “manner of stating the most radical claims in a calm and unapologetic way.” “Because of his scientific and political convictions,” Johnson added: “Rushton endured decades of social ostracism, professional discrimination, grotesque smears, mentally unhinged stalkers, attempts to have him fired from his job, and even physical assaults at the hands of Canada’s egalitarian peace-and-love-mongers.’’

Born in Bournemouth, England, Rushton earned his Ph.D. in social psychology at the London School of Economics and Political Science.

Author of a handful of academic tomes, numerous articles, and a one-time fellow of the John Simon Guggenheim Memorial Foundation, Rushton’s major published work is Race, Evolution and Behavior. His findings: black people have larger genitals, breasts and buttocks — characteristics that Rushton alleged have an inverse relationship to brain size and, thus, intelligence.

In recent years, Rushton spoke on the alleged IQ deficiencies of minorities at conferences of the racist American Renaissance magazine and website, and published a number of articles in that magazine. His work also is often published on racist websites, including the anti-immigrant hate site VDARE.com. In 2002, after renting several academic mailing lists, Rushton mailed an abridged version of Race, Evolution and Behavior to 40,000 people — a mailing paid for by the Pioneer Fund, the race science outfit that he led for several years.

Reacting to complaints from scientists who had received the mailing, the book’s original publisher, Transaction, disavowed the smaller booklet and said that the abridged version had been “purged” of any “evidentiary basis.”

In 2002, Rushton became president of the Pioneer Fund, which has for decades funded dubious studies linking race to characteristics like criminality, sexuality and intelligence. Pioneer has long promoted eugenics, or the “science” of creating “better” humans through selective breeding. Set up in 1937 and headed by Nazi sympathizers, the group strove to “improve the character of the American people” through eugenics and procreation by people of white colonial stock. Pioneer has financed a number of leading race scientists, lavishing large sums each year on those who work to “prove” inherent racial differences that the vast majority of scientists regard as nonsense.

As a teacher, Rushton was given several positive reviews on the RateMyProfessor.com website, like the student who wrote, “Cutting edge research into race differences. One of the few professors not afraid to undertake ground breaking research.’’

But a majority of the reviewers rated him “poor quality.’’

“He epitomizes the overall capacity of the human species to rationalize superficial ignorance towards others,” one student wrote. “Not a good prof,” another wrote. “His work on race and ethnicity makes me wonder if I’m in the 19th. Don’t take him if you want to keep your sanity.”