An uptick for the country, and a time of creative thinking for the GOP 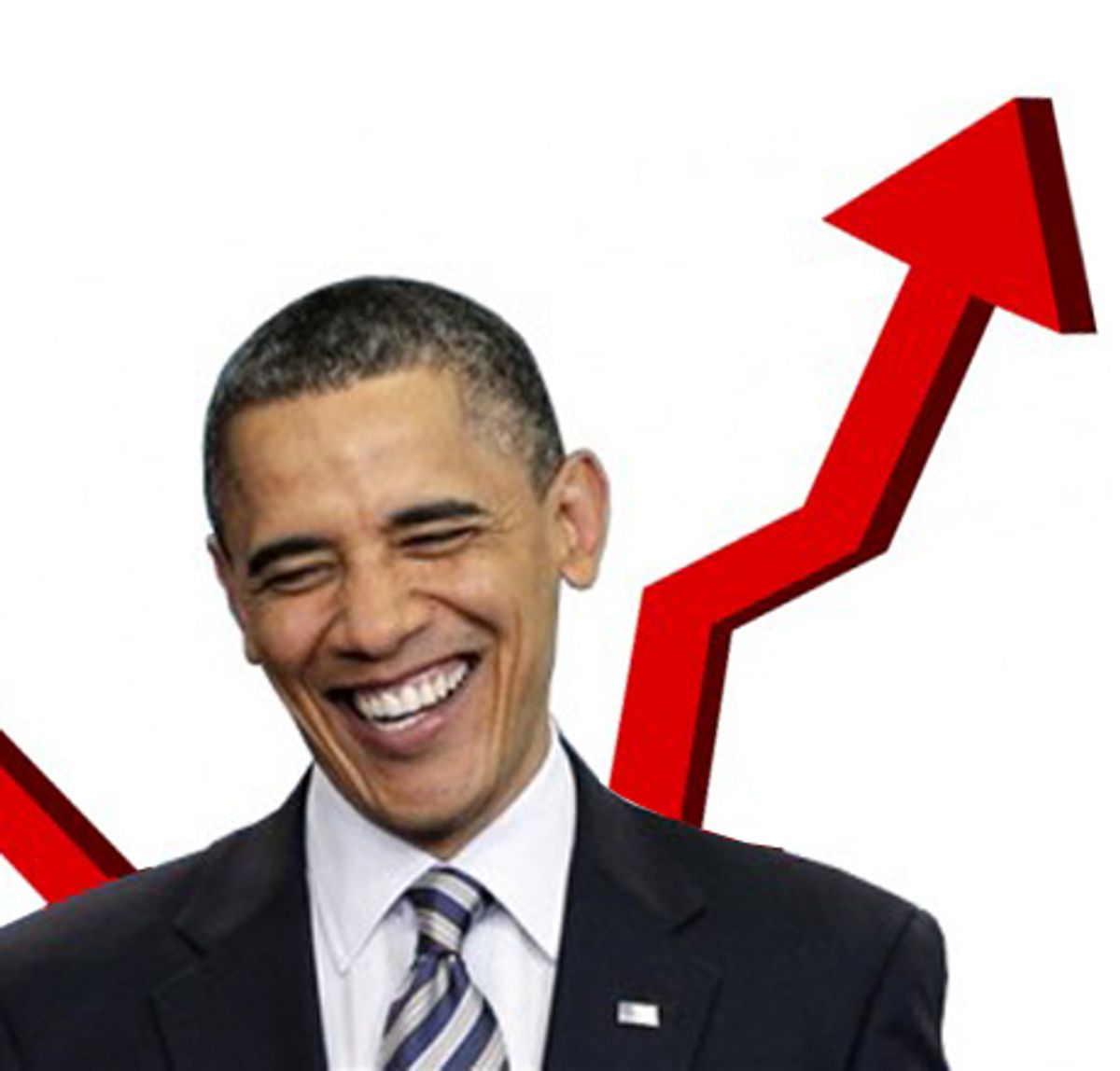 This month's jobs numbers are out, showing the unemployment rate to have fallen to 7.8 percent, robbing Republicans of a favorite talking point. That number is a 44-month low,  according to the Associated Press , which reports the unemployment number fell from 8.1 percent because "the number of people who said they were employed soared by 873,000." Predictably, right-wing Republicans are crying foul , insisting, based on nothing, that the career civil servants at the Bureau of Labor Statistics must be cooking the books.

The report comes is very good news for President Barack Obama, coming on the heels of his lackluster debate performance Wednesday night against Republican presidential candidate Mitt Romney. It also puts a dent in a favorite GOP talking point that is based on a lie, one that  Romney doesn't mind repeating  -- that Obama purportedly promised that the stimulus would bring unemployment to below 8 percent. (That was a projection -- not a promise -- in a report authored by Christine Romer, then director of the the President's Council of Economic Advisers.) Obama  never made that promise , but since when did the truth matter in Romney's campaign strategy? His is, after all, a campaign that would not be "dictated by fact-checkers," in the words of Romney pollster Neil Newhouse.

In fact, the news is so good for Obama that a number of Republican eminences have stepped forward to say it just can't be true. And just like the poll numbers that show Obama outpacing Romney in the swing states, they're chalking it up to a grand conspiracy.

ThinkProgress has collected the reactions of some prominent Republicans, beginning with a tweet from Jack Welch, the former GE CEO, who, TP notes, famously cooked the conglomerate's books during his tenure: "Unbelievable jobs numbers..these Chicago guys will do anything..can't debate so change numbers."

Of course, West also alleges the the congress is populated by communists, so you may want to consider the source.

The "experts" at Fox News weighed in, also, natch, seeing nefarious forces at work. Fox's Stuart Varney dubbed the numbers too "convenient," while Eric Bolling tweeted about something "insideous" (sic) at work. Also on Fox, ThinkProgress reports, "Charles Payne 'guarantees' that unemployment rate will be revised back up to above 8 percent after the election. "

Then there's Washington Examiner colunmnist Conn Carroll, who tweets he doesn't think that BLS cooked the books, but rather that a lot of unemployed Democrats lied to BLS researchers, saying that they had gotten jobs.

The most ridiculous assertion may come in a statement from Americans for Limited Government, which sees an even grander conspiracy, one that has the Federal Reserve in cahoots with BLS:

Either the Federal Reserve, which has its fingers on the pulse of every element of the economy, and the Bureau of Labor Statistics manufacturing survey report are grievously wrong or the number used to calculate the unemployment rate are wrong, or worse manipulated. Given that these numbers conveniently meet Obama’s campaign promises one month before the election, the conclusions are obvious.

Since Obama took office, Republicans have sought to game the unemployment numbers at the state and local levels by forcing layoffs of public employees through anti-union austerity measures. According to an analysis by Moody's Analytics (reported by the New York Times in June), unemployment figures would be a percentage point lower were it not for all the public-sector layoffs.