"Taken 2" and the spy-movie problem

From the Bourne films to "24" and the odious "Taken 2," Hollywood is struggling with spooks in the Patriot Act era 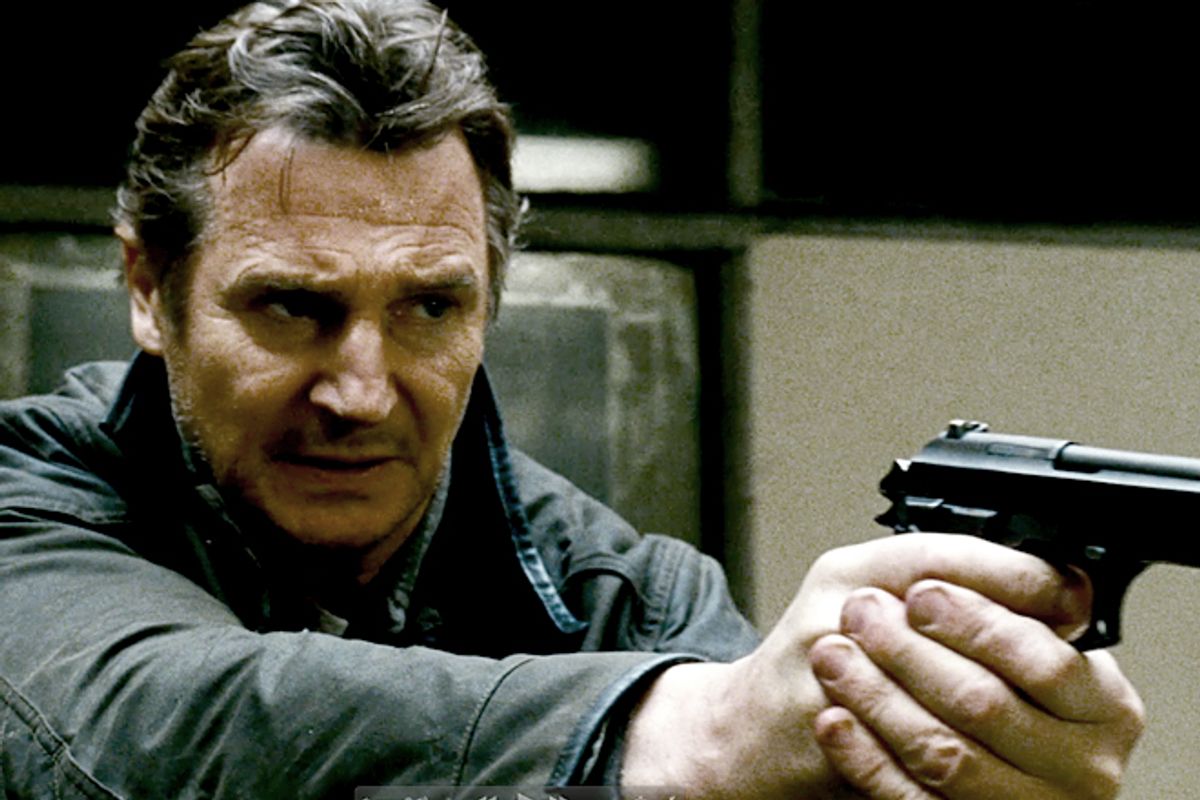 Luc Besson and Liam Neeson and the rest of the furriners who made the inept and offensive “Taken 2” don’t seem to have gotten the memo from Jason Bourne: Americans don’t think our spooks are good guys anymore. Okay, I realize the situation is a bit more complex than that. I don’t want to wander into the “people like me” fallacy: Everyone in my parents’ neighborhood in 1972 voted for George McGovern, so he must have won easily, right? But I do think it’s true that in recent years — and arguably a good deal longer than that — movies and TV shows about spies have reflected our increasingly bad conscience about the hidden world of America’s global secret police. That’s just as true, or almost as true, for overtly right-wing products like the odious but addictive “24,” with its ludicrous litany of ticking-bomb scenarios and torture justifications, as it is for bleeding-heart, pseudo-sophisticated fare like the “Bourne” franchise.

Like almost everything else about American politics and culture, this goes back to the Cold War. Indeed, when Dick Cheney urged us, in the days after 9/11, to join him on the Dark Side of the Force – okay, he didn’t say “the Force,” but he didn’t have to — he was only reasserting a postwar order that had been temporarily thrown into chaos after the fall of the Berlin Wall. A Manichaean and roughly symmetrical worldview, in which your opponent is seen as infinitely evil and infinitely devious, is extremely useful if your goal is subverting constitutional governance and replacing it with a permanent, hidden shadow-state that stands outside electoral politics. Is that overly paranoid? Well, I don’t know. But if I’d told you a few years ago that we would one day see a Democratic president claim the right to sentence any civilian to death, anywhere in the world, on secret evidence and with no pretense of judicial process, that might have sounded pretty crazy too.

Art and culture, including popular entertainment, is often where a society’s doubts about itself can be most freely expressed, and from its very beginnings the spy thriller has often presented espionage as, at best, a morally dubious affair. Even in a prewar classic like Hitchcock’s “The 39 Steps,” while the main character’s decency is never in question, the sense that the spy bureaucracy is a semi-competent, half-sinister organism eager to blame its mistakes on others is a main plot driver. Pretty much every movie about a real or de facto agent on the run, who’s been framed for some murder or treachery he didn’t commit, is descended from that one, right up to and including “Mission: Impossible – Ghost Protocol,” “Salt” and the Bourne series.

Indeed, outside of the Bond franchise and its various imitators, it’s not all that easy to come up with spy movies, even from the height of the Cold War, that present the world of espionage and counterespionage in straightforward or idealistic terms. Certainly John Frankenheimer’s “The Manchurian Candidate,” from 1962, is the most effective piece of Red Scare propaganda ever applied to celluloid. But along with its ultra-conspiratorial view of the dastardly Commies – who have not merely brainwashed and trained an assassin, but implanted a Joe McCarthy-type anti-Communist politician as a triple-secret agent -- that film paints a scabrous, misanthropic and satirical portrait of American society as a zone of nutbars and sheeple, barely worth saving from the incoming red tide.

A year after that movie was released, of course, John F. Kennedy was killed, and the official explanation involves a weird guy with ties both to the loony left and the loony right, whose shadowy history included a visit to the Soviet Union. I’ve never felt personally persuaded by the theories that Kennedy was killed by the CIA, or by Soviet and/or Cuban intelligence – for one thing, they can’t both be true, unless you’re going nuclear with your paranoia – but they’ve never gone away. All the unanswered questions surrounding the JFK assassination only strengthened our sense that there was an entire world that lay below the surface of the one we could see, and that nothing about it was salutary.

All the social division of the 1960s around the Vietnam War and America’s role in the world made the spy thriller seem increasingly problematic, and except for the Bond series – which simply ignored all real-life current events – they often sought refuge in the reassuring past of World War II. A virus of existential doubt began to spread through the genre, perhaps beginning with Martin Ritt’s outstanding 1965 adaptation of John le Carré’s “The Spy Who Came in From the Cold.” Starring Richard Burton in one of his least showboaty screen performances, as a burned-out British agent sent into East Germany as a fake defector, the film (and the book) are arguably closer in tone to Albert Camus than to Ian Fleming. Even more mundane British spy fare of those years, like the trio of Len Deighton adaptations starring Michael Caine (“The Ipcress File,” “Funeral in Berlin” and “Billion Dollar Brain”), drank deep from the same well of exhaustion and cynicism.

But the year I really want to talk about is 1975, in the PTSD American aftermath of Vietnam and Watergate, when spies and spying were very much in the news. Sen. Frank Church, D-Idaho, held a series of committee hearings that year that laid bare the extent of questionable or outright illegal conduct by the FBI and CIA, ranging from widespread surveillance of both prominent and ordinary citizens to covert attempts to assassinate foreign leaders and overthrow hostile governments. The Church committee was widely demonized by conservatives at the time, especially after a CIA station chief was killed in Greece, and its work remains controversial in the 21st century. After 9/11, some commentators claiming that these revelations crippled U.S. intelligence gathering over the long term and enabled the creation of al-Qaida. (Funding and arming a bunch of loony-tunes jihadis to kill Russians in Afghanistan had nothing to do with it, I guess.)

That year also saw two major spy movies featuring two of Hollywood’s biggest stars, which established a dichotomy within the genre that endures to this day. On one side we have “Three Days of the Condor,” with Robert Redford and Faye Dunaway, a fast-paced adaptation of a pulpy bestseller directed with style by Sydney Pollack. If the fashions and mannerisms of the movie – those sideburns! – seem positively antique, it holds up pretty well overall. Clearly an heir to “The 39 Steps” and a direct ancestor of both the Bourne films and Tom Cruise’s “Mission: Impossible” series, “Condor” tells a classic man-on-the-run story, as Redford’s bookworm character is forced to unpack a world of double-dealing, insider warfare and government corruption. When confronted with the argument that the CIA plays dirty because it has to, Redford’s character turns New York Times whistle-blower.

But the antidote, for viewers who found “Condor” unbearable liberal pantywaist propaganda, came in the virile mountaineering-espionage adventure “The Eiger Sanction,” starring Clint Eastwood and his impressive mid-'70s hairdo as a retired CIA assassin turned art professor (yes, really) turned frequently shirtless freelance patriot. There are a lot of superficial similarities between the two films, including the general atmosphere of government coverup and post-Vietnam blowback, but the preening machismo of “Eiger” is pretty hard to take, as is the obvious pandering to Eastwood’s “Dirty Harry” fan base. It was Clint’s first big Hollywood production as an actor-director, and seemed aimed at building a franchise around his character, a lady-killing, wisecracking Yank cognate to James Bond. But while “Condor” was a pretty big hit, “Eiger” was middling at best, and Eastwood dropped not just the franchise idea but the spy genre, period.

I would be the first to agree that audiences go see spy movies for the thrills and the action scenes, not the politics, and on that level too “Taken 2” (which was directed by Luc Besson flunky Olivier Megaton, and no, that’s not his original last name) is incoherent, relying on a boom-boom-chaka-boom musical score and repeated shots of random structures in Istanbul being destroyed by men in fast cars. A crucial plot element in “Taken 2” involves an American teenage girl roaming around the city chucking out live grenades to mark her progress, rather like Hansel and Gretel with exploding breadcrumbs. As Neeson’s defrocked CIA assassin, Bryan Mills, might say in his overly flat Amurkin accent, it’s Istanbul, Kim -- stuff gets blown up every goddamn day. Indeed, the city’s only inhabitants appear to be scary Albanian sex traffickers and their henchmen, ominous-looking Muslim women in full-face hijab and weird old blind guys playing the oud. Everybody’s too busy being threatening to go work in a bank, or buy eggs at the supermarket.

Context matters, and the context for “Taken 2” (a sequel to the 2008 hit in which the same Albanians kidnapped the same teenager, that time in Paris) is a xenophobic, ugly-American worldview inherited from “The Eiger Sanction” and, still more, from James Cameron’s “True Lies,” pretty much the balls-out gold standard for this kind of dumbed-down, pseudo-flag-waving thriller. I say “pseudo” because producer Besson and director Megaton (who also made the ludicrous drug-war thriller “Colombiana,” a movie even stupider than this one but 20 times more enjoyable) are a couple of French dudes, for Christ’s sake, and exactly the kind of French dudes whose exaggerated love for the very worst kinds of American movies has caused them to stick their heads deeply up their own butts.

Stand aside, now, because I’m droppin’ the bomb on Mr. Megaton! Luc Besson is officially being “Taken 2” the woodshed! If these guys believe in anything about this movie, they believe in it entirely as gesture, mannerism and style. They may or may not be smart enough that they’re cackling up their sleeves the whole time; it’s not impossible that “Taken 2” is a meta-American movie, a Godardian spoof of the whole genre, an attempt to see how stupid and insulting a motion picture can be and still be a big hit. (See also: “True Lies.”) They believe that removing the guilt from the spectacle of an implacable American with high-end hardware killing every funny-accent, facial-hair-wearing foreign mofo in sight will pay off. And, yeah, they’re probably right.