What would happen without a moderator? 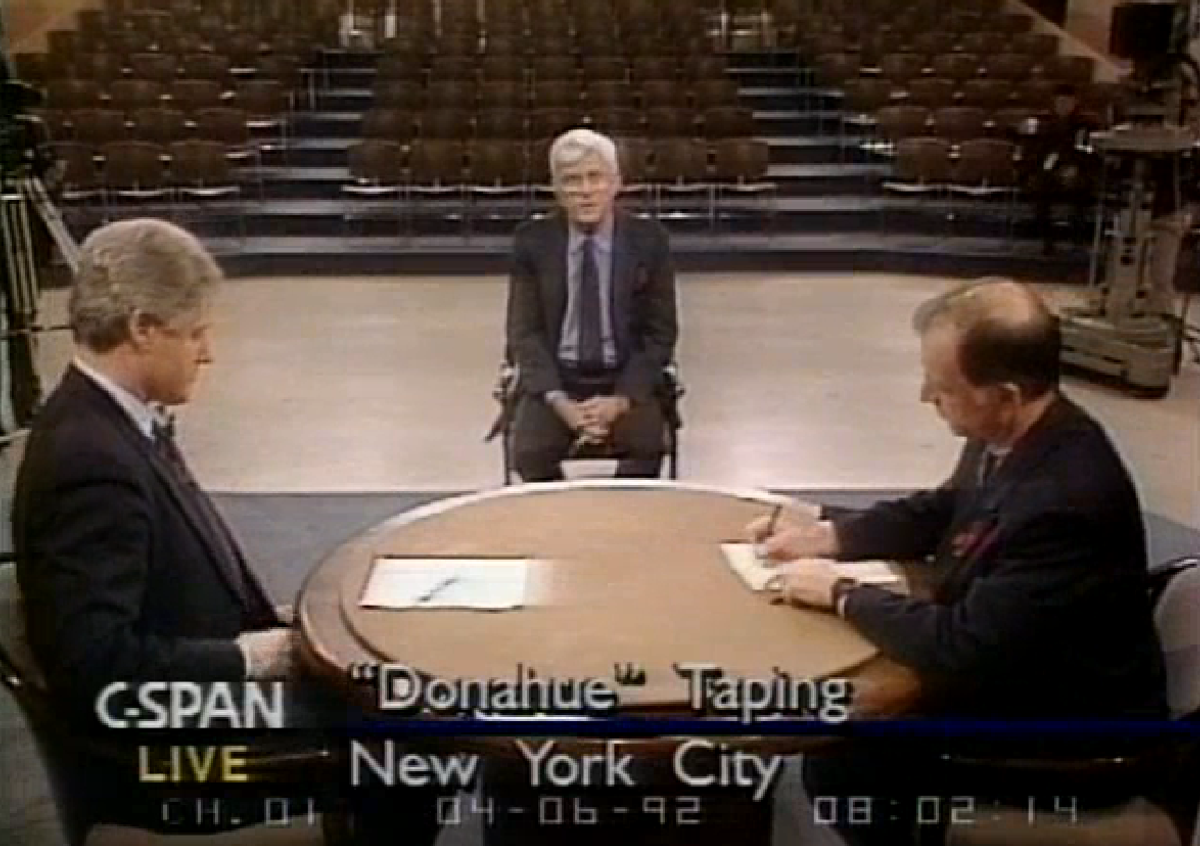 The reviews of Jim Lehrer’s performance as last week’s debate moderator, you might have noticed, weren’t so hot. The 78-year-old semi-retired newsman has come under fire for, among other transgressions, letting the candidates (well, Mitt Romney, mainly) walk all over him, focusing on too narrow a range of topics, asking questions that were too broad, and shying away from obvious follow-ups.

The Commission of Presidential Debates, which selected Lehrer, defended his performance by essentially arguing that the moderator who moderates less moderates best.

The goal of the debate, the CPD said in a statement, “was to have a serious discussion of the major domestic and foreign policy issues with minimal interference by the moderator or timing signals. Jim Lehrer implemented the format exactly as it was designed by the CPD and announced in July.”

But this raises a question: If the moderator’s job is to get out of the way, why have a moderator – and a tightly regimented format – in the first place?

This is not as theoretical as it might is sound. Believe it or not, there has actually been a nationally televised presidential debate with no moderator and no rules. It was the brainchild of Phil Donahue, the daytime talk show pioneer, who cleared out his live studio audience and handed over the entire hour of his show to Bill Clinton and Jerry Brown on the eve of the critical 1992 New York Democratic primary.

The result, though, wasn’t as explosive, exciting or illuminating as many had expected. Seated across from each other at a round table, the candidates struck an agreeable tone and spent the bulk of the program identifying common ground and criticizing the incumbent Republican president, George H.W. Bush.

This represented a jarring break from what had been a vicious campaign.

The Democratic race had started out as a battle between Clinton and Paul Tsongas, and the nomination had seemed settled when Tsongas suspended his campaign after lopsided defeats in Illinois and Michigan. But then Brown, who was 10 years removed from his run as California’s governor, engineered a shocking upset of Clinton in the Connecticut primary. That set the stage for a two-week do-or-die test for Clinton New York. With Democrats openly questioning his general election viability in the wake of a series of scandals, he desperately needed a win to calm the waters. Otherwise, there was talk of national Democrats recruiting a new candidate into the race.

Even before New York, things had gotten ugly between Clinton and Brown, but in the world’s media capital, it was all intensified. Donahue, who taped his show in New York, initially brought each candidate on for separate interviews.  Each time, the host got personal. With Clinton, Donahue spent nearly a half-hour asking about the “character” issues – marital infidelity, the Vietnam draft, marijuana use, and so on – that would supposedly make him a weak general election candidate. With Brown, Donahue focused in on his status a 54-year-old bachelor, leaving Brown to say, “I go out with girls, yes, I do."

Donahue’s audience let him know its displeasure with his questioning, leading him to invite both candidates back for a completely different exercise: No audience, no host, just the two of them sitting at the table and talking, for the full hour. Clinton and Brown accepted and showed up for their taping on the morning of April 6, the day before the primary. Donahue’s plan had been to stay out of the room, but the Clinton campaign insisted that he remain present. So he took a chair a few feet in front of the stage and made his entire nine-word contribution to the broadcast as soon as the cameras started rolling: “I am pleased to present Governor Brown, Governor Clinton.”

At first, there was silence, with neither candidate knowing quite where to start. Finally, Brown piped up: “Well, I just want to say, I’m very happy to be here with, uh, uh, Bill Clinton.” Then he spent a few minutes outlining his campaign’s broad themes, and Clinton did the same.  “I guess, Bill, it’s up to us to keep it moving along,” Brown then said, transitioning to lengthy retelling of his life’s story. This is roughly how it went for the entire debate. Neither man seemed interested in confronting the other on policy differences or in litigating any of major controversies that had defined much of the campaign. It probably had little effect on the primary, which Clinton ended up winning comfortably – a result that cemented him as his party’ s presumptive presidential nominee. (Thanks to  C-Span’s video archive, you can watch the entire debate online.)

But he said the experience didn’t shake his belief that moderator-less debates  -- “Put the two candidates in a room with a bottle of water, a pen and a notepad, one table, and two chairs -- and they should sit facing each other” -- are the way to go, at least when it comes to general elections.

“The viewer would see who’s the most thoughtful, the most aggressive, who responds most strongly to what issues, and what issues would they raise? All of that would be light years more instructive than putting these two guys behind podiums like high school graduation speakers.”

Donahue said he has sympathy for Lehrer and sees him as a victim of a construct that just doesn’t work.

“I really feel that this old format of three minutes for this, and two minutes for a rebuttal, after which we’ll change the subject – it’s really ridiculous,” he said. “No debate panelist or moderator has ever been able to get a satisfactory answer in the time allowed.”