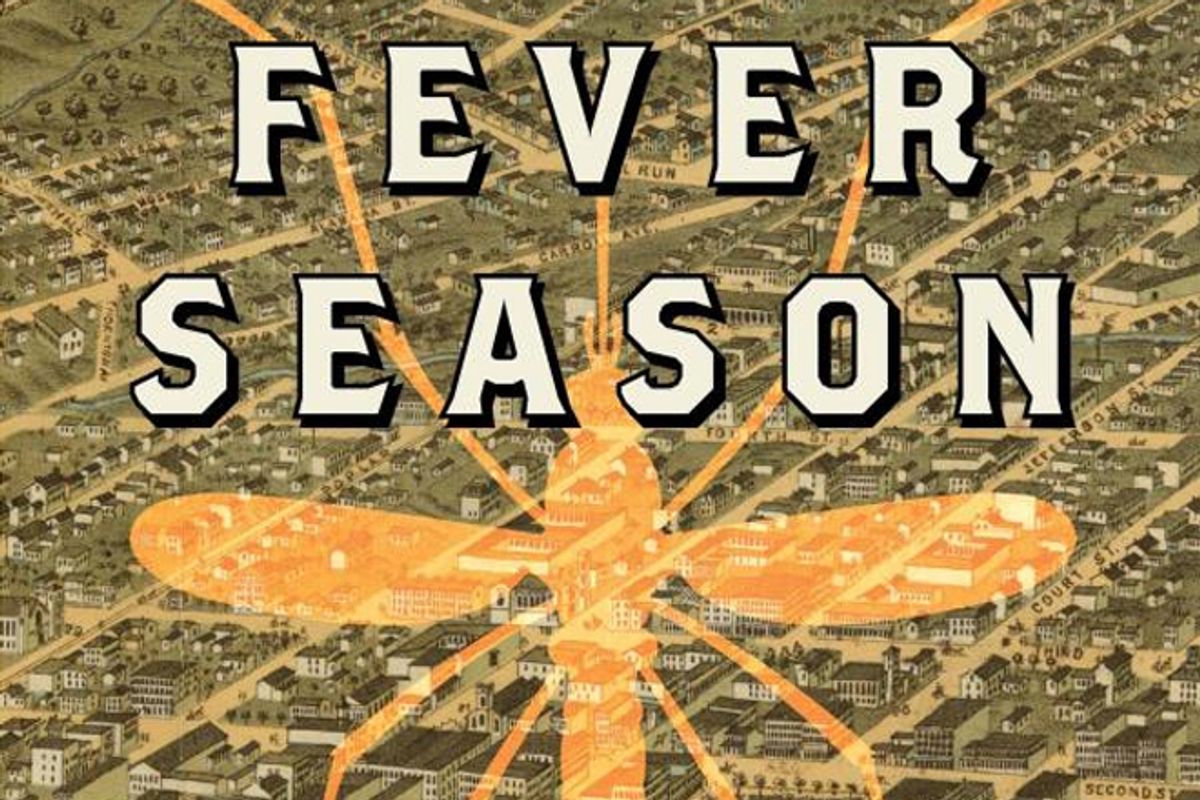 "The panic is fearful today," wrote an Episcopal nun from Memphis, Tenn., in the summer of 1878. "Eighty deaths reported and half the doctors refuse to report at all. We found one of our nurses lying on the floor in her patient's room down with the fever, another is sickening. I really believe that Dr. Harris and I and the two negro nurses are the only well persons anywhere near here."

With more than half the city's population fled and most of those remaining stricken by the virus known as Yellow Jack, Bronze John and "the Stranger's Disease" — yellow fever — Memphis resembled a post-apocalyptic landscape to rival that in any zombie film. At the peak of the epidemic, corpses lay in the streets as overburdened work crews struggled to convey them to mass graves. Looters rampaged through the posher homes in the only major urban center between St. Louis and New Orleans, guzzling their victims' liquor and collapsing with the fever at the scene of their crimes. At one point, a single man remained of the staff at the Western Union telegraph office, which was the sole, fragile information conduit between the quarantined city and an outside world looking on in horror and pity.

As Jeanette Keith describes it in her new history of the 1878 plague, "Fever Season: The Story of a Terrifying Epidemic and the People Who Saved a City," yellow fever's grisly reign over Memphis that summer forged the city's identity for generations to come. It was a saga that capsized conventional 19th-century American views of heroism. All but one of the city's white Baptist ministers left the city. A prominent politician on a trip out of town deserted his family. African-Americans, who were rumored to be immune to the disease, stepped up as militia men and police officers, providing essential security for the relief effort. And in one much-celebrated instance, a prosperous madam sent her girls away and converted her brothel to a hospital, where she nursed the sick until she was felled by the fever herself.

"The 1878 fever is the closest example we have to what a killer epidemic might be like today," Keith writes. Like bird flu and other viruses that currently keep epidemiologists up late at night, yellow fever is incurable. It was not until 1901 that a team of Army researchers led by Walter Reed established that the virus is spread from human to human via mosquitoes. In 1878, the debate over how to control it focused on quarantines (effective) and massive (but useless) disinfection campaigns targeting "filth" -- open sewage, food scraps and other refuse -- with gallons of carbolic acid. The particular mosquito variety that transmits the disease breeds in clean, still water, and Memphis -- which, in addition to its warm summers, had no municipal water supply and therefore relied on cisterns of rainwater stored in and around residences -- offered an ideal incubator.

Keith notes in her introduction to "Fever Season" that most histories of epidemics emphasize human agency in the face of nature, trumpeting scientific advances or communal projects that subdued the contagion. ("Thus, we whistle past the graveyard," she wryly notes.) But any such efforts in the Memphis of 1878 were irrelevant; the disease raged unchecked until it ran out of victims and the frosts came. Keith asserts that what matters in this story is "personalities and what the people of 1878 would have called, simply, character."

For this reason, "Fever Season" is a rotating series of portraits. John McLeod Keating, editor of the Memphis Daily Appeal -- an Irish immigrant, partisan of the Confederacy and fanatical Democratic Party supporter whose views of African-Americans were profoundly changed by what he saw in 1878 -- serves as her foremost witness. Among the other figures whose lives (and deaths) she recounts are: a self-sacrificing physician who lied about his health to his wife and the mother of his eight children to keep her out of the city, the Jewish heir to the local dry-goods dynasty who fatally embraced the rare opportunity for gallantry provided by the epidemic, a 50-year-old nurse from Houston whose small independent income allowed her to travel wherever her skills were needed, and more. All these rose to the occasion: to care for the sick and dying, to feed the stalwart few who remained behind to help and to tell the world about Memphis' suffering.

Robert Reed Church is a less distinct figure in this account, although he would become a man of consequence later. Born a slave (the son of the white man who owned him), he ran a saloon at the time of the epidemic. Keith is pretty sure Church remained in the city that summer -- as most African-American citizens did -- but unlike Keating and the other primary characters in this book, he left no written record of his experience.

What Church did do was move into the demographic openings left by the fever, which really did afflict whites to a greater extent than blacks. (Yellow fever, if survived, leaves the victim immune, and studies suggest that people of West African descent may have some hereditary resistance to the disease.) In that brief gap between the end of Reconstruction and the establishment of Jim Crow, Church became a real estate magnate whose charitable activities helped shelter a cultural enclave that would change the world. "The Memphis of the blues, of B.B. King and and Elvis, of Beale Street ... That Memphis grew in a space created and nurtured by Robert Church."

Historians know that, over the ages, communities' responses to epidemics are highly consistent, moving through stages that one scholar, Charles Rosenberg, has likened to the acts in a drama. But on the individual level, Keith observed, "compassion and courage are wild cards." This reality did not suit the prejudices of the time, and "although people who lived through the epidemic knew that black militias and black policemen had been crucial to the city's survival, the next generation of white Memphians preferred to overlook that part of the city's history." (Keith compares this to the blind spot many white Southerners had regarding the African-American half-siblings their fathers conceived with female slaves.)

Eventually, however, the truth was unearthed, and "Fever Season" is the latest and most readable effort to spread the word. It also testifies to a fact worth bearing in mind in the future. "Epidemics strip away social pretensions," Keith writes, "and show us for what we are... The people we trust may not be trustworthy, and the people we scorn may rise to heroism."