Deficit hawk Pete Peterson and Senate moderates are gearing up for a lousy debt deal. Would Obama go along? 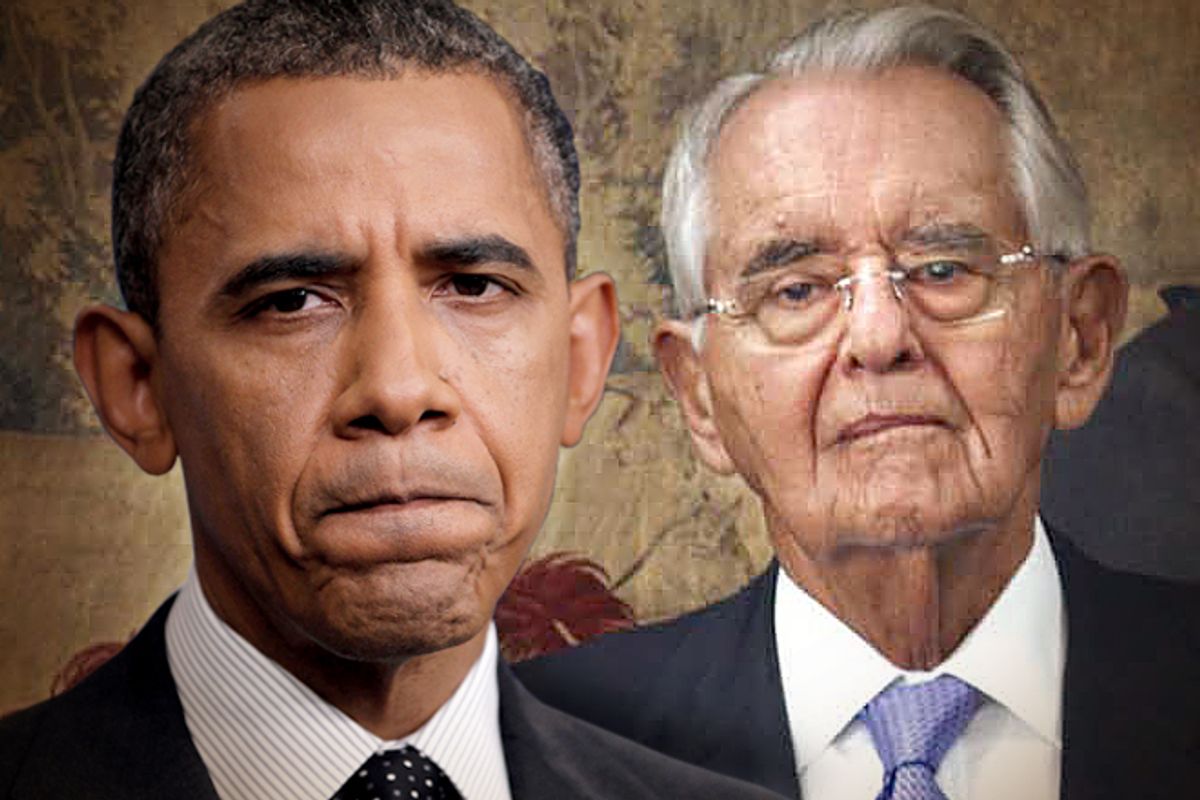 If Barack Obama wins reelection, the question for liberals is whether he'll rejoin his unfortunate crusade for a Grand Bargain. We came dangerously close in 2011, and the coming "fiscal cliff" threatens to bring us to the brink yet again. And Pete Peterson will be there, the minute the election ends, to help push Washington to Fix The Deficit.

Pete Peterson, as Ryan Grim reports, is at it again. He is throwing millions of dollars at yet another group -- an impeccably bipartisan one, as always -- devoted to selling both regular Americans and the political elite on the idea that our single most pressing national problem is the national debt.

Democrat Ed Rendell and Republican Judd Gregg are the co-chairs of "The Campaign to Fix the Debt," run by Peterson's Committee for a Responsible Federal Budget, a nonprofit also co-chaired by various moderate former members of Congress from both parties. Peterson has donated $5 million to the new campaign.

In one sense, it's a colossal waste of money: In terms of elite opinion, Peterson won years ago, and with the public as a whole, all the money in the world has of yet been unable to convince anyone that destroying Social Security and Medicare is a sensible idea. He's been at this for years, and donated probably nearly a billion dollars all told (he spent half-a-billion dollars between 2007 and 2011), and still Americans don't particularly want to fix the deficit by cutting services that keep old people alive.

Peterson is a Wall Street billionaire and Nixon's old commerce secretary, but his efforts are always carefully bipartisan. His money goes to everyone, and his influence is pervasive. Here's just one tiny example, from Michael Hiltzik:

On the other hand, his connections can be hard to keep straight: In 2009, for example, the Washington Post published a news article talking up an ostensibly independent effort to create a bipartisan deficit-cutting commission in Washington. The piece included approving comments from Robert L. Bixby, executive director of the "nonpartisan" Concord Coalition. What wasn't disclosed is that the Concord Coalition was funded and co-founded by Pete Peterson, and that the article itself had been provided to the Post by Fiscal Times, the news outlet launched by, yes, Pete Peterson.

You can tell Peterson's message has been effective just by listening to the presidential debate -- just about everything Jim Lehrer asked was informed by the "moderate" bipartisan consensus on debt and government spending issues. (At the Massachusetts U.S. Senate debate, David Gregory was even worse.) It is a sign of Adultness in Washington to have the most publicly unpopular plan to fix the debt. To promise to cut programs that benefit many people is universally considered "braver" than, say, suggesting we soak the rich.

The Deficit is not our biggest problem, at the moment, when millions of people are out of work, wages have been stagnant for years, and poverty is reaching levels not seen in decades.

But President Obama listens to the Serious Men of Washington, and they all agree that we need to Do Something About Entitlements, as soon as possible.

It's important to remember, when you hear commentators and journalists beg for a world-saving compromise, that in the modern era almost anything that is broadly bipartisan is a bad idea. The Invasion of Iraq, the Patriot Act and the 1996 Telecommunications Act were all authorized by Congress with impressively bipartisan votes. The unprecedented intransigence of Republicans in the Obama era is, frankly, something of a blessing for left-wing Democrats, as it has thus far prevented horrible bipartisan bills, but the Beltway remains ever optimistic that an embarrassing loss for the Republicans might finally bring about the conditions for compromise. And, of course, in D.C., each failure of bipartisan compromise shifts the debate to the right, so that the former moderate Republican position is now the most liberal one -- see immigration, where we're now fighting to simply not deport children, or healthcare reform, where the Heritage Foundation's conservative plan passed without a single Republican vote. So each proposed Grand Compromise is worse than the one before. A couple of years ago, Democrats may have fought to restore top marginal tax rates to where they were for the majority of the Reagan administration; now they battle for a return to the Clinton era, and there's a good chance they'll give quite a bit of ground in order to simply allow the set-to-fully-expire Bush tax cuts to partially expire.

The Senate is, obviously, already hard at work crafting a Simpson-Bowles-style debt deal. Obama would not hesitate to sign such a deal. The only question is whether House Republicans would play along with the grown-ups or rebel.

Ironically enough, if Mitt Romney wins, congressional Democrats would likely take courageous (and politically canny) stands against any changes at all to our beloved social insurance programs, as they did when George W. Bush attempted to privatize the program. It's not remotely enough to make you want to root for the guy to win, but we shouldn't ever forget that Democrats are always much more admirable in opposition than in power.