The JPMorgan CEO wanted to be part of Obama's team, but was left out in the cold with Goldman Sachs 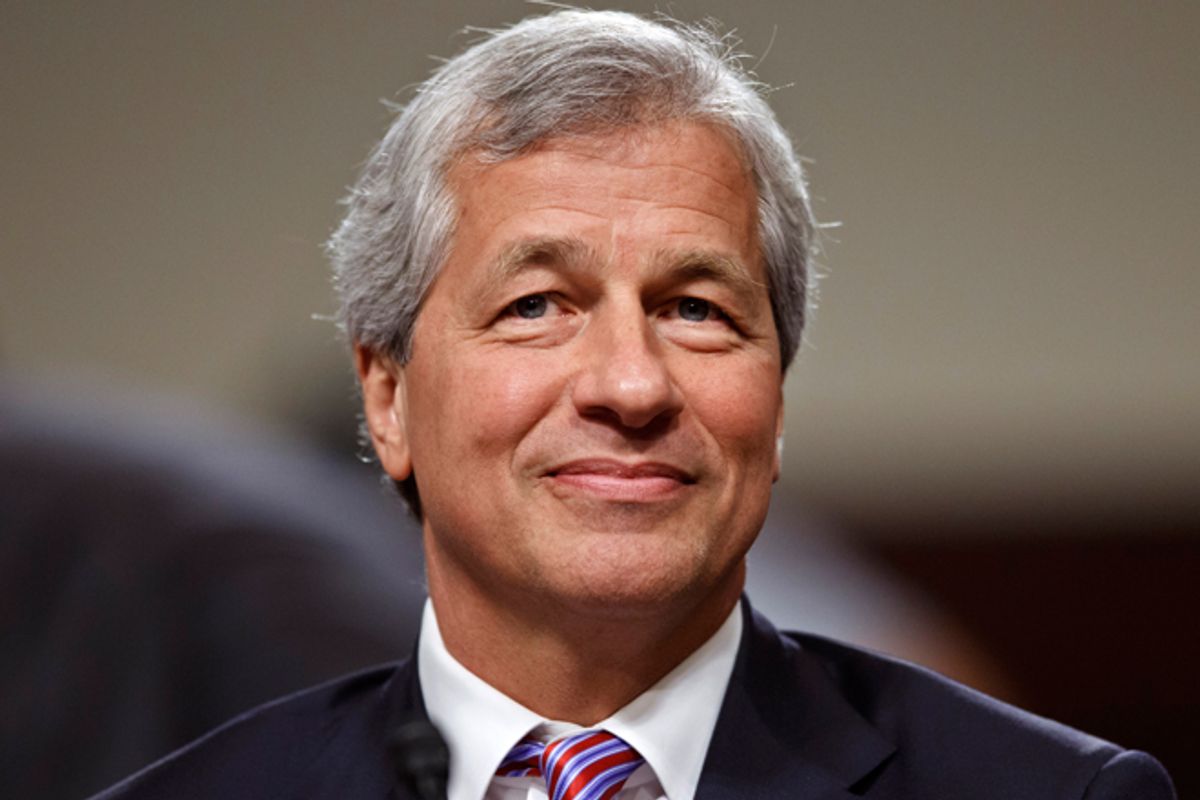 Wall Street's reality-distortion field is nothing if not internally consistent. Earlier today, I discussed Goldman Sach's feelings about being left out of the regulatory process:

Resentments against the White House began, said senior Goldman executives, because the firm thought it would be consulted when the Obama administration began crafting regulations in response to the financial crisis. They weren't.

After publishing that post, I finally found the time to read William Cohan and Bethany Mclean's epic profile of JPMorgan Chase CEO Jamie Dimon. The language describing his bruised ego is spookily similar:

At President Obama’s inauguration, Dimon said to Obama and to Treasury Secretary Tim Geithner, “Tell me what you need. I’ll send people down here. I’ll do anything,” says one D.C. hand. “Jamie walked into 2009 with the view that he was on the team.” He wasn’t.

Talk about your entitlement society! To anyone who wasn't actually employed by a big bank, the Obama administration appeared, during its first year, to be bending over backwards to save the financial system while doing as little disruption as possible to the way Wall Street worked. At great political cost, the White House convinced Congress to authorize the release of the remainder of the TARP funds. Even as the likes of Paul Krugman called for the nationalization and breaking up of the biggest banks, the Obama administration bailed out Citigroup and Bank of America. Timothy Geithner and Larry Summers were widely perceived to be more concerned with keeping Wall Street afloat than helping Main Street.

But the bankers themselves were upset because they weren't invited to participate in writing the rules that would bind them. Ironic, isn't it? Despite historically low taxes, weak financial sector regulation and unprecedented income inequality, the rich are incredibly pissed off.

The now notorious letter sent by Westlake Resorts CEO Donald Siegel warning his employees that he may be forced to fire them all if Obama is reelected is just one more data point to add to the pile. The wealthiest Americans literally have never had it so good, and yet they live in a permanent state of seething agitation spawned by the mere notion that the current state of affairs isn't fair. What's even worse, they believe it is their birthright to tell the government what to do, as if decades of Washington kowtowing to financial sector special interests wasn’t critically responsible for creating the mess that Obama has had to clean up.