"Nashville": "All About Eve" goes honky-tonk 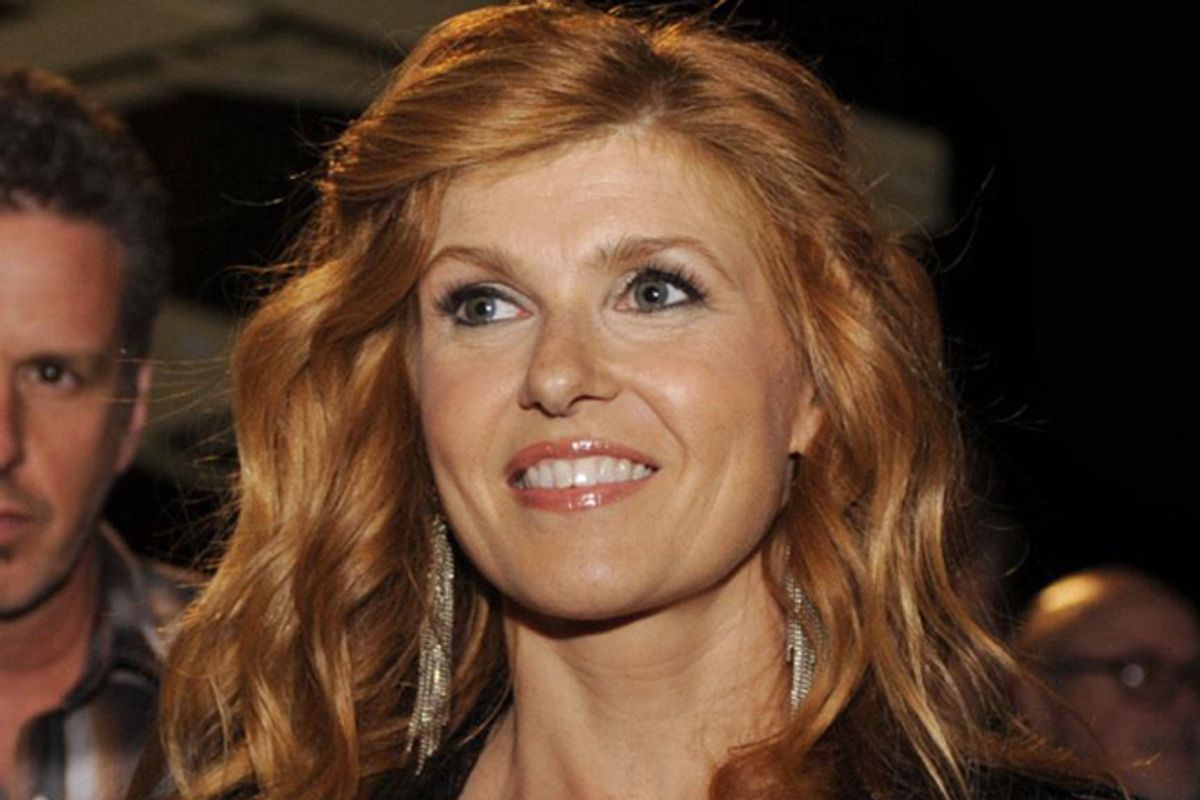 “Nashville,” ABC’s new honky-tonk drama premiering Wednesday night, stars “Friday Night Light’s” Tami Taylor in a soap opera created by the writer of “Thelma & Louise” that is equal parts “All About Eve” and “Country Strong” and features songs from the likes of Elvis Costello and Lucinda Williams. It’s possible there exists a Mad-Libs of a show I would be predisposed to like more, but I have no idea what it could be. Happily, “Nashville,” with its unexpected intelligence and surprisingly low-key attitude, not only met all my cockamamie expectations, it exceeded them. By a resounding clamor of y'alls, “Nashville” is the most enjoyable show of the new fall season.

Connie Britton stars as Rayna Jaymes, a good-hearted country music superstar in long standing. (Think Faith Hill, but with a distaste for doing crossover singles like “This Kiss.”) A married mother of two, Jaymes' new record is a flop, and her label wants her to either go on tour with its newly minted star Juliette Barnes (Hayden Panettiere) or junk the record. Barnes is a Taylor Swift with a bad attitude and a voracious sexual appetite (the songs that have been selected for the character actually sound like Swift’s, a nice detail), and she approaches Jaymes with all the pleasantness of a hissing cat.

The two women take an instant dislike to each other, and the engine of the first episode, and presumably those to come, will be a battle of wills between them. It’s not exactly a fair fight: Britton’s innate likability threatens to overrun Panettiere and even to defy logic at times. According to Rayna, Juliette has no talent, and the show points out that she needs auto-tuning. But Panettiere’s voice doesn’t sound much worse than Britton’s. Still the force field of Britton’s appeal is so strong it’s hard to credit Rayna with being pettily harsh — you want to take her side.

Tricking out the cast is a murderers’ row of supporting characters. The always commanding Powers Booth plays Rayna’s controlling, imperious father, with whom she does not get along — so much so she refuses to touch the trust fund he’s had waiting for her for the past two decades. Making up the various legs of what is sure to be a convoluted love quadrangle are Rayna’s sweet husband and mayoral candidate, Teddy (Eric Close), whom she once settled for, and Deacon (Charles Esten), the band leader Juliette lusts after and who was, presumably, the love of Rayna’s life (and, judging from a throwaway line in the first episode, probably the secret baby daddy of her first daughter). They are joined by a younger generation of singer-songwriters who will be Rayna’s way out of her record predicament: the ethereal, secretly ultra-talented Scarlett (Clare Bowen); her cad boyfriend Avery (Jonathan Jackson), who is actually destined for Juliette; and Gunnar (Sam Palladio), the sweetie-pie, soulful singer destined for Scarlett.

With an intergenerational catfight at its heart, “Nashville” may sound like a soap opera in the “Dallas” vein, which is to say campy and winking, with outsize villains and saints skulking and smirking and sinning around a well-to-do Southern metropolis. But “Nashville,” which is filmed in its titular city, is startlingly grounded, caring more about details — great songs, strong dialogue, interesting exteriors — than about going over the top. It has none of the arch cleverness or forced cheeriness of “Desperate Housewives,” the intentional ludicrousness of “Revenge,” or even the comic-tragic extremes of “Grey’s Anatomy.” “Nashville” is certainly a soap opera, but it is neither overly abashed nor unduly proud of this fact, working within the genre without calling attention to it all the time. It’s less operatic, more acoustic.

The characterizations are remarkably nuanced. Rayna, appealing though she may be, is very much a woman who has been famous for the last 20 years. She has her pride and her expectations and is not about to open for some newbie 20-year-old, even if it makes financial sense. During a rehearsal, Rayna loses her temper, throwing her earpiece to the floor and storming off the stage. A few minutes later, she apologizes for having a “diva dip” —  she’s self-aware enough to apologize, but not so well-behaved that she’s above acting out. She’s had people at her beck and call for two decades, and she behaves like it. Juliette, meanwhile, is given the softening detail of having a meth-head for a mother. This isn’t subtle, but it is an effective and satisfyingly neat explanation of why she’s looking for comfort in every man in sight and has an automatic aversion to anyone as naturally maternal as Rayna.

However toxic Rayna and Juliette’s relationship gets — and it looks to get pretty toxic— as on all great shows, casting is destiny. (Brilliant showrunners don’t write in a bubble, but with an awareness of the actors they have.) The facts on the ground are as follows: Juliette needs a mother figure, and Connie Britton has delivered the earthiest, sexiest, most appealing maternal figure TV has ever produced. (The deifying penumbra of Mrs. Coach is so strong that when Rayna is getting ready for bed in a ratty T-shirt, I was surprised it didn’t say “Dillon Panthers.”) “Nashville” has got some real “All About Eve” DNA to it, but if Panettiere can play Eve Harrington to the hilt, Britton is no Bette Davis. Bette was likable because she was a bitch, and Connie Britton is likable because she does not seem like a bitch even when she is being bitchy (see: that diva dip). However many seasons it takes, Rayna and Juliette are not destined for some forever war — and I know I'll be watching every minute of their long, convoluted, dramatic, tearful, melodic trek toward peace.