Should NFL players be forced to wear pink?

A writer gets flak for blasting the NFL's breast cancer campaign, but you can hate cancer and its commodification 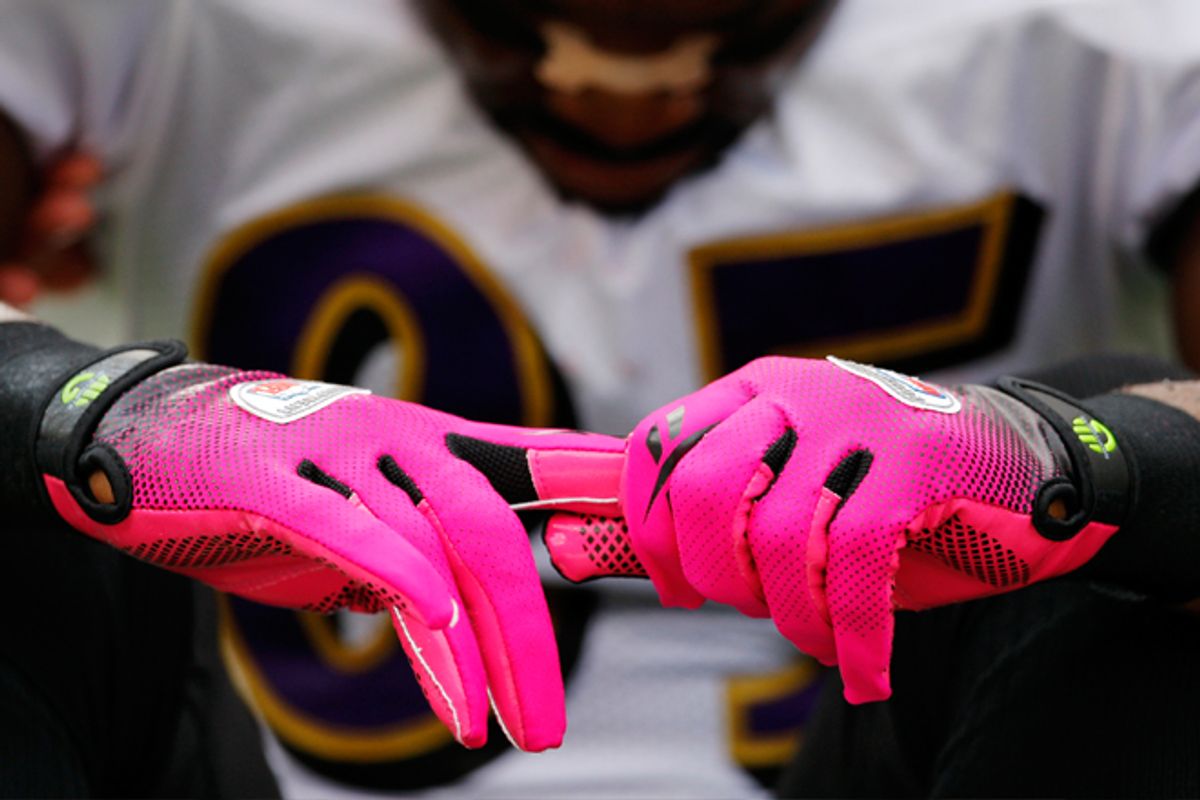 As a sports writer, Peter King is undoubtedly used to getting flak for his opinions. So when he tweeted last week in despair at professional football's month-long, rosy-hued display of breast cancer awareness, "Please. Not pink for a month, NFL. A week, great. But a month?" the response was predictably unfavorable. "You got a problem w/ cancer awareness?" wrote one of his Twitter critics, while another asked, "Really? Is it that serious? If it's raising money for cancer is it really worth complaining about?" and yet another declared, "Get over it for those we've lost and survived, we honor them in any way we can."

In the face of the retorts, though, King pressed on, musing, "Is breast cancer the only charity NFL should support?" To the person who asked, "What if each team could pick one week in October where they wear the pink?" he retorted, "Perfect. That'd be ideal." But over at ESPN's radio 104.5, Jay Sanin was appalled. "ARE YOU SERIOUS?" he demanded, suggesting, "Maybe instead of being an ignorant idiot about life-threatening diseases, Peter King should stick to being an ignorant idiot about the NFL."

Sanin argued that if the NFL were to follow King's suggestion of limiting the amount of pink to an October team rotation, "That would mean it was seen in less stadiums, resulting in less awareness, which goes against the principles of Breast Cancer AWARENESS Month." Yes, because if we didn't see pink on the football field throughout October, how else would any of us know that it's breast cancer awareness month? How would we be aware? Of breast cancer? I've got to ask, dude, ARE YOU SERIOUS? Have you been to, I don't know, a store lately? Or a restaurant? Or gone outside?

Peter King's original displeasure over the October pinking of the NFL may stem from an old-fashioned distaste for the color or the perceived feminization of a manly pursuit. But he's dead right in his weary, oversaturated assessment of what's become a grotesquely glutted month, the retail Christmas of cancer. The NFL's commitment to supporting women with breast cancer — a very personal cause for many of the players — and to raising money for research is admirable, even if it does continue to throw funding at controversial causes like Susan G. Komen for the Cure.

But, as has been pointed out by many critics in innumerable venues — for instance, in last spring's tremendous documentary "Pink Ribbons Inc." — there is a world of difference between helping people with cancer and slapping on a cuddly color in the name of "the cure." Breast cancer is not a single disease that manifests in exactly the same way in every patient. There will never be "a cure." If we're lucky, research will lead us all to a hopeful place where a variety of treatments are available to successfully target each individual's experience of disease.

If a football player wearing pink gloves reminds somebody to get a mammogram or is seen as a sign of respect for someone who's going through chemo right now, that's awesome. It's great that the NFL is working with the American Cancer Society's Community Health Advocates National Grants for Empowerment. But it is straight-up BS to unquestioningly swallow every Pepto Bismol-colored piece of cancer cheerleading shoved down our throats every October. Many people, including those with experience of breast cancer, find themselves coming down with what writer Xeni Jardin calls "pink nausea," unmoved by what Barbara Ehrenreich famously calls the "sentimentality" of breast cancer culture. On the Sarcastic Boob blog recently, writer Scorchy railed persuasively against "your Pinktober audience: apathetic, selfishly unaware, willfully ignorant and easily brainwashed."

Most of us like women and don't like cancer. Most of us extra-super-don't-like cancer when it kills our friends and mothers and daughters. That doesn't mean we can't be disgusted by the over-appropriation and commodification of disease and the way it's used to leer at women or reduce our value to just the sexy parts. We can support women, we can be outraged at the viciousness of cancer, and not believe in pink. And if pastel-tinted muffin pans and lapel ribbons or cleats aren't a person's thing, it's downright bullying to suggest that automatically makes him or her "an ignorant idiot." Ignorance is assuming that a color has a moral value and that "awareness" is sufficient. You want to see ignorance? Look around this pink-festooned month. We're drowning in it. We're dying in it.