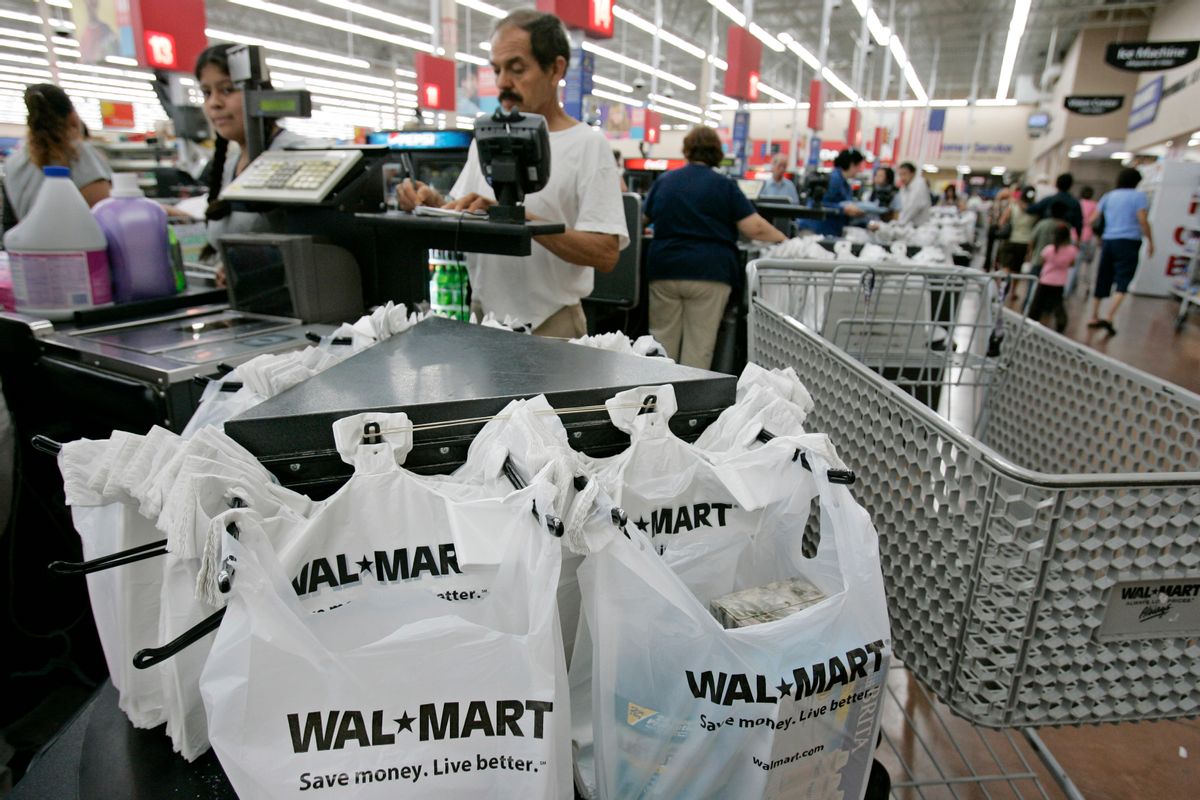 For the second time in five days – and also the second time in Walmart’s five decades – workers at multiple U.S. Walmart stores are on strike. This morning, workers walked off the job at stores in Dallas, Texas; Miami, Florida; Seattle, Washington; Laurel, Maryland; and Northern, Central, and Southern California. No end date has been announced; some plan to remain on strike at least through tomorrow, when they’ll join other Walmart workers for a demonstration outside the company’s annual investor meeting in Bentonville, Arkansas. Today’s is the latest in a wave of Walmart supply chain strikes without precedent in the United States: From shrimp workers in Louisiana, to warehouse workers in California and Illinois, to Walmart store employees in five states.

“A lot of associates, we have to use somewhat of a buddy system,” Dallas worker Colby Harris said last night. “We loan each other money during non-paycheck weeks just to make it through to the next week when we get paid. Because we don’t have enough money after paying bills to even eat lunch.” Harris, who’s now on strike, said that after three years at Walmart, he makes $8.90 an hour in the produce department, and workers at his store have faced “constant retaliation” for speaking up.

On Thursday, as first reported at Salon, southern California Walmart store workers staged a day-long walkout of their own. Organizers say over sixty workers from nine stores signed in as on strike. About thirty of them were from the same store in Pico Rivera, where strikers and supporters rallied with labor leaders, clergy and politicians. “I’m still thrilled about what happened,” said Harris, who flew in for last week’s walkout. “And it’s given me a lot more energy and a lot more drive.” Other workers were visiting from further away than Texas: When the striking workers returned to work Friday morning, international Walmart workers marched into their nine stores with them, carrying their own countries’ flags.

Reached by email last night, Walmart spokesperson Dan Fogleman said the company “has some of the best jobs in the retail industry – good pay, affordable benefits and the chance for advancement.” Asked about last week's walkout, he said, “There is nothing new, nor historic, about the fact that labor unions want to organize Walmart. Their rally was just the latest publicity stunt by [the United Food & Commercial Workers union] to seek media attention in order to further its political agenda and financial objectives.” Fogleman said that Walmart “had a few people go out to join the rally – very few when you consider the more than 12,000 people we employ in LA County … This event was not a factor.”

Both Thursday’s strike and today’s were spearheaded by OUR Walmart, a year-old organization of Walmart workers backed by UFCW. The group is calling for improved staffing and benefits as well as an end to alleged retaliation against its members. Though closely tied to the UFCW, OUR Walmart isn’t identifying itself as a union or calling for union recognition from the famously anti-labor company. UFCW; SEIU, the service employees union; and ACORN supported a different non-union Walmart workers association in 2005, so the concept isn’t new. But the strikes are.

Before these work stoppages, “the other stuff had been so predictable from Walmart’s point of view," Columbia University political scientist Dorian Warren said yesterday. They’ve always had activists coming to Bentonville. They’ve never had a disruption in their supply chain.” Warren, who’s co-writing a book on Walmart, said the strikes by warehouse workers and store employees are a game-changer: “There was ‘Before,’ and there was ‘After,’ and we just crossed that line.”

Like last week’s, OUR Walmart is describing today’s strike as a protest against retaliation. In July interviews with Salon, OUR Walmart activists alleged that Walmart illegally punished them for standing up. OUR Walmart has since filed dozens of Unfair Labor Practice charges against Walmart with the National Labor Relations Board. OUR Walmart alleges that the company has tried to suppress employees’ activism through illegal tactics, such as threatening workers, and legal ones, such as holding mandatory meetings to bash OUR Walmart. In interviews with Salon, Walmart’s Fogleman denied the threats and retaliation, but not the mandatory meetings.

Those retaliation charges also affect the riskiness of the strike. Labor law generally recognizes non-union workers’ right to strike without being punished for it. But it also recognizes employers’ right to “permanently replace” those striking workers, preventing them from coming back to work (if that seems not to make sense, that’s because it doesn’t). If the government agrees with OUR Walmart that the strikers are motivated by alleged crimes by management, then it would be illegal for Walmart to “permanently replace” them.

Asked yesterday whether any workers would be penalized for missing their shifts on Thursday, Fogleman emailed, “The law allows workers to do this, so long as it is done in a peaceful way.” But OUR Walmart activists say that when it comes to Walmart, legal protections are little comfort. Harris gave the example of a co-worker who was fired, ostensibly for “stealing time,” immediately after a lunch break conversation with Harris about getting involved in OUR Walmart. He said management was standing nearby throughout the conversation.

Professor Warren predicted that public relations concerns would be “infinitely more important” than the law in dictating Walmart’s response to strikes. Given that retaliation against strikers is more likely to draw attention, said Warren, “the gamble is, it could either send a signal that if anybody else tries this you’re going to get fired. Or it could actually end up pissing off more workers who would then be willing to take collective action. So that’s actually their dilemma right now, because their normal response is just retaliation, to fire workers.”

Dallas store workers are walking off the job just as three dozen Illinois distribution center workers return to work. Like the eight C.J.’s Seafood workers who struck in June and the 30 California warehouse workers who struck in September, the Elwood, Ill., workers aren’t legally employed by Walmart, but they’re moving goods for the retail giant. “Walmart owns the facility,” freight handler Phillip Bailey said yesterday. “They decide exactly what goes on there … the whole thing is a squeeze that ends up squeezing the workers the most … the conditions all stem from Walmart.” (As Salon has reported, some experts agree.) Bailey said he and other workers were fired for their role in presenting a petition addressing issues of safety and wage theft.

A rally and civil disobedience action in support of the workers last Monday temporarily shut down the Elwood distribution center, Walmart’s largest in the United States. The three-week Elwood strike against the Walmart subcontractor RoadLink was organized by the Warehouse Workers Organizing Committee, which is backed by the United Electrical, Radio and Machine Workers union (UE). According to Leah Fried, a UE staffer working with the workers, RoadLink has agreed to rescind all of its allegedly retaliatory discipline – including the firing of Bailey and three others – and, in a rare move, to pay the strikers full wages for the time they were on strike.

Bailey, said that victory holds a lesson for other workers in the Walmart supply chain: “Sometimes, if you stand up and stick together, you win.”

What’s next? OUR Walmart has promised a major announcement tomorrow regarding future actions. Meanwhile, there’s more organizing afoot. Two weeks ago, U.S. Customs and Immigration Services issued visas to three workers who were leaders in the June CJ’s Seafood strike, following approval from the Justice Department on the grounds that they were witnesses or victims to workplace crimes. According to National Guestworker Alliance Lead Organizer Jacob Horwitz, those workers plan to organize other guest workers in Walmart’s supply chain to confront the company.

Last week’s strike also took place as representatives of the global union federation UNI were in town to launch a new Walmart Global Union Alliance. “In Argentina, we have a union, so we’re able to have that strength that doesn’t exist here,” Marta Miranda, a three-year Walmart greeter turned full-time union delegate, told Salon Friday in Spanish. Miranda, who was visiting as part of the UNI delegation, said that when she returns to Argentina, she’ll tell her co-workers that “the sleeping giant is waking up.”

Head of UNI Commerce Alke Boessiger said Friday to expect the new global alliance to coordinate “joint actions” in the coming months. Boessiger emphasized that while many countries have laws that are more pro-union than the U.S.,  “Walmart will do anything to avoid unions” anywhere. She added that Walmart workers abroad understand that supporting U.S. workers is necessary for the sake of “making sure that this model that the company has developed in the U.S. is not being exported.” Could those joint actions include multi-country strikes? “I wouldn’t exclude it,” she said.

“We’re going to do whatever it takes in order to get this change to happen,” Harris said hours before the start of today’s strike. “If it costs me my job, then I’m fine with that at this point. That’s how bad it is … it’s a small price to pay for global change.”