The V.P. can lay out the Romney and Ryan platform's cruelty to women and children like nobody else can 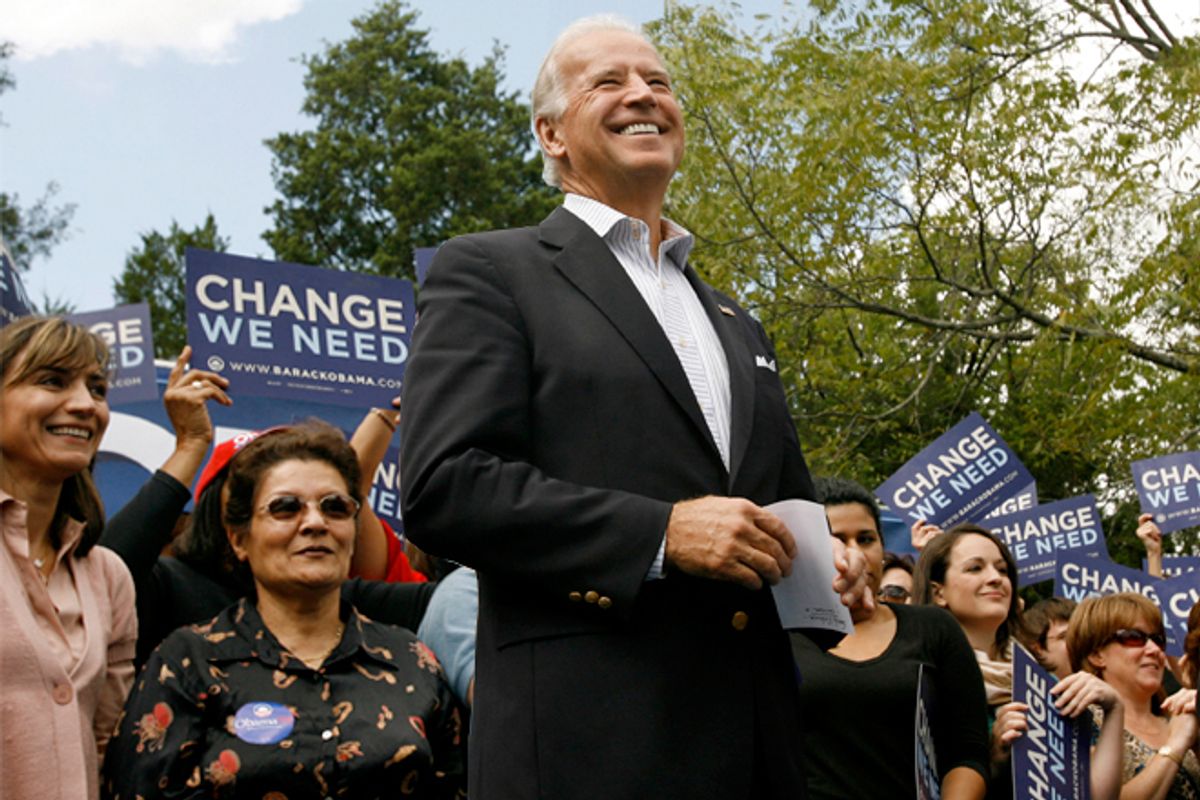 Many Democrats were mystified that President Obama didn't talk about his record on women's issues in the first debate. Pollster Stan Greenberg found that unmarried women in particular – a cornerstone of the president's base – felt his debate performance failed to show the difference he would make, and had already made, in their lives. Obama will have two chances to correct that impression himself, but Vice President Joe Biden is perfectly positioned to do it Thursday night, in his debate with Paul Ryan.

Biden's got to tie the right-wing Ryan around Romney's neck like a millstone, and smile while doing it. Actually, he's got to tie Ryan's unpopular positions around Ryan's neck too, since the vice-presidential nominee has been either hiding or running away from them since he was asked to join the ticket. Biden has to surface Ryan's most callous statements about women, rape, Medicare and Social Security, and poor families, and spend a good share of his time on Ryan-shaming. (More on Ryan-shaming below.) He's a natural for it.

Unlike Ann Romney, Biden doesn't need to say, "I love you, women!" His biker-chick magnetism aside, the V.P. has a strong record on women's issues of his own, going back to his authoring the original Violence Against Women Act, which House Republicans, including Ryan, voted down this year. He must talk up Obamacare, which he rightly called "a big fucking deal," for what may be its biggest deal of all: making sure that being a woman is no longer a preexisting condition. He's got to make plain that Ryan opposed the Obama administration's first big move: making the Lilly Ledbetter Fair Pay for Women Act the law of the land.

The Catholic Biden has the moral credibility and gravitas to point out the cruelty of Ryan's stance on federal programs for women and children, as well as reproductive health. It's well known that Biden opposed the administration's first cut at its health-insurance contraception mandate, because he thought it didn't create a broad enough exemption for religious institutions that opposed it. With the compromise that made the issue a matter for insurers, not employers, the White House won back major Catholic organizations like the Catholic Health Association and organizations representing Catholic hospitals and Jesuit universities. Ryan, by contrast, supported the Blunt-Rubio amendment, which would allow any employer to deny coverage of any medical service they want. Biden should talk about how the most effective anti-abortion program in the world is contraception. He's got to make clear that Ryan supports personhood legislation that would declare that life begins at fertilization, give fetuses the same rights as women, ban abortion in cases of rape and incest and criminalize some forms of contraception.

And while acknowledging the moral complexity of the abortion issue, the pro-choice Biden is perfectly positioned to zero in on the cruelty of Ryan's opposition to abortion even in cases of rape and incest. He can fairly tie Ryan to crazy Todd Akin, and show how Ryan and Akin co-sponsored bills that would have redefined rape as "forcible rape." (Though that language was ultimately removed, it was in the bills when Ryan co-sponsored them.) He might want to ask Ryan whether they'd have established rape panels to decide what was a "legitimate rape." Biden should note that in an interview with a Virginia television station on the eve of the Tampa convention, Ryan defended his longtime position that abortion should be illegal even in cases of rape – a position that's been in the GOP platform since 1992 -- coldly saying that "the method of conception doesn't change the definition of life."

And when a Milwaukee reporter asked him directly if rape is truly "a form of conception in your mind?" Ryan answered, "Well, of course it is. Tech – I mean look at the technologically – technically speaking it is. The point is if you believe life begins at conception, that’s where life begins." The callousness required to call rape just another "method of conception" demands a full dose of Biden grief and outrage.

The full force of Biden's moral vision may be clearest when he zeroes in on Ryan's stands on issues of poverty. Only this week, the wealthy Wisconsinite proclaimed that "inner-city" Americans need to be taught "good discipline, good character." I'm sure Biden has plenty of stories from Wilmington that will show that people there have at least as much discipline and character as Ryan. I also look forward to Biden making clear that Ryan derives his moral ideas more from the pages of Ayn Rand than from Catholic social teachings. His budget would slash funding for programs that mainly serve poor women and children, from Medicaid to child nutrition programs to Temporary Assistance for Needy Families. Even the Catholic bishops, who side with Republicans on contraception and choice, were moved to chide Ryan for the way his budget hurt the poor. Before he spoke at Georgetown earlier this year, 90 Catholic theologians and Georgetown staffers wrote that Ryan's budget "appears to reflect the values of your favorite philosopher, Ayn Rand, rather than the Gospel of Jesus Christ."

Finally, Biden must make clear that Ryan is an enemy of both Social Security and Medicare as we know them. Those are women's issues, too, since 68 percent of the Americans over 65 receiving both programs are women. Biden should be able to do something with the fact that Ryan saved up the Social Security survivor benefits he got after his father died to go to an out-of-state university, but then became the leading House proponent of privatizing Social Security. A program that has the government putting retirement savings into the stock market should be called Social Insecurity, just like Ryan's plan to voucherize Medicare should be labeled Vouchercare. And I dare Paul Ryan to bring up the fact that his mother supports his Medicare plan; we will hear stories about Joe Biden's beloved mother, Jean, who died at 92 in 2010, that will make everyone cry. Including Ryan.

I know, I know, my strategy risks sending Joe Biden into some dangerous territory, literally (no, not literally, I just couldn't resist), because you can imagine any number of awkward locutions and Bidenisms on issues of women and their bodies. But it's worth the risk. The V.P. gets to be tougher on the opponent than the president does – although Obama knows he needs to be tougher too, telling radio host Tom Joyner he was "too polite" in his debate with Romney last week. He has the perfect foil in Ryan, a callow kid of privilege who opposes everything Biden stands for. Thursday night should be one for the ages.

Oh, about Ryan-shaming: Inspired by the site dogshaming.com, as well as Ryan's sheepish looks when he's confronted by reporters with the contradictions of his positions, we thought it might be fun to create a Ryan-shaming feature. Check it out. But it only works if you contribute your own Ryan-shaming photos and quotes (and please make sure quotes come with documentation).  Send them to ryanshaming@salon.com and we'll post the best.