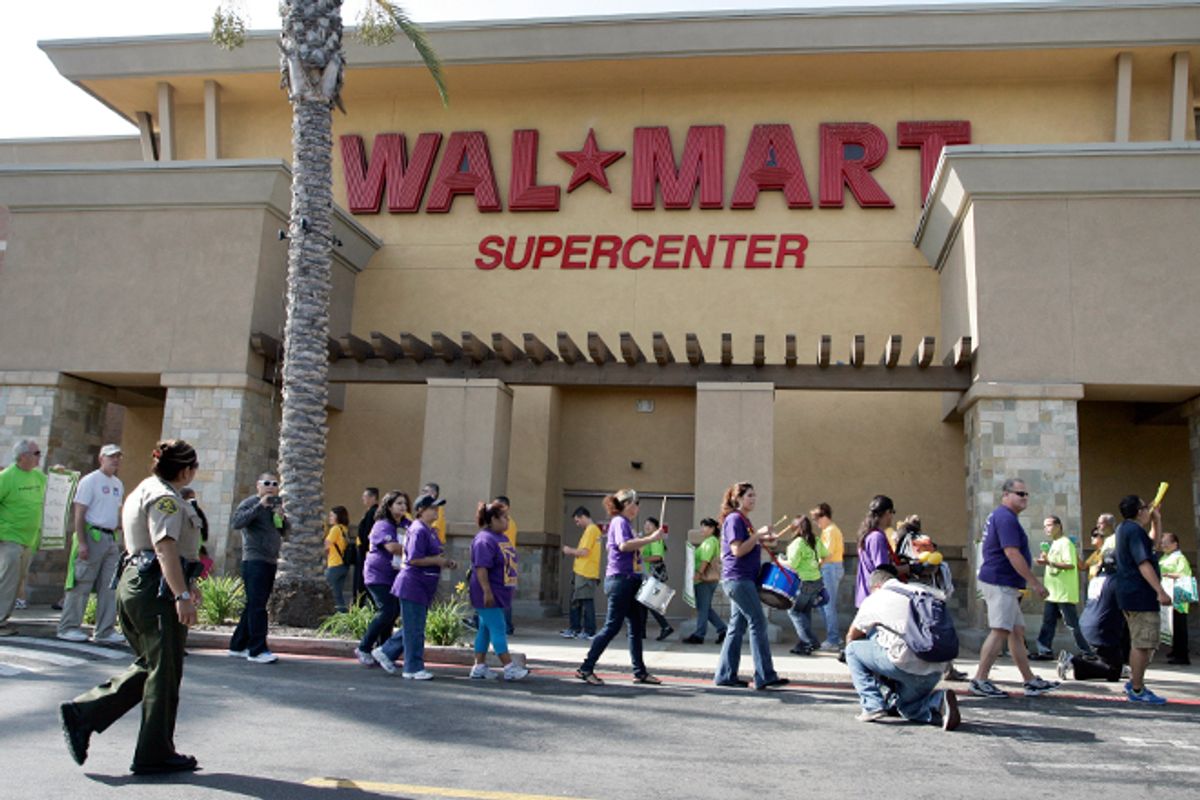 One day after Walmart employees in twelve states launched a major strike, today workers issued an ultimatum to the retail giant: Stop retaliating against workers trying to organize, or the year’s most important shopping day, the Friday after Thanksgiving, will see the biggest disruptions yet. The announcement comes as 200 workers – some of them currently striking – have converged in the Walmart's Bentonville, Arkansas hometown outside the company's annual investors meeting. It offers a new potential challenge to Walmart, and a new test for OUR Walmart, the labor-backed organization that’s pulled off the first two multi-store U.S. strikes in Walmart history.

If Walmart doesn’t address OUR Walmart’s demands, said striking worker Colby Harris, from Dallas, “We will make sure that Black Friday is memorable for them.” He said that would includes strikes, leafleting to customers, and “flash mobs.” Harris was joined on a press call announcing the deadline by leaders of the National Consumers League, the National Organization of Women, and the Labor Council for Latin American Advancement, three of the national organizations that have pledged support for the workers’ efforts. Absent a resolution, said NOW President Terri O’Neill, NOW members will join Walmart workers outside stores on Black Friday to ask customers “whether they really want to spend their dollars on a company that treats workers this way.”

Dan Schlademan, a UFCW official, told Salon that to avert the Black Friday actions, “at a minimum” Walmart would need “to end the retaliation,” including reversing the firings of workers allegedly singled out for their activism.

According to OUR Walmart, 88 total workers have been on strike since yesterday at 28 stores in twelve states. The largest group was in Dallas, Texas; others struck stores in Miami, Orlando, Seattle, Chicago, Missouri, Minnesota, Maryland, Kentucky, and California. They followed 70 who struck in southern California last Thursday. And as Salon has reported, this week’s and last week’s store strikes follow two strikes by about 70 Walmart warehouse workers employed by contractors or sub-contractors during the past month.

“I don’t think this will be a flash in the pan,” Chris Rhomberg, a strike expert at Fordham University, said last night. “If they’ve been able to achieve this level of coordination, I imagine we’ll see more.”

Asked about the ongoing strike, Walmart spokesperson Dan Fogleman told Salon that every one of Walmart’s stores is “open for business” and “fully staffed,” that “Walmart has some of the best jobs in the retail industry,” and that internal surveys show that most employees are satisfied. Regarding the potential Black Friday action, Fogleman said he “couldn’t speculate on what might happen in the future, but what I can tell you is we continue to have dialogue with our associates.” Regarding retaliation, he said, “We have a very strict policy that prohibits retaliation of any sort.” As for whether Walmart could conceivably agree to reverse allegedly retaliatory firings as OUR Walmart demands, Fogleman said, “If there is any retaliation that occurs, that would be something we want to investigate. We have the policies in place to address that.” As before, Fogleman described OUR Walmart as “a union-backed, union-funded organization that is using some of our associates to further the organization’s political and financial objectives.”

Asked about a similar statement by Fogleman about OUR Walmart last week, Pico Rivera, CA ,OUR Walmart activist Evelin Cruz said it sounded just like what Walmart management tells workers in on-the-clock meetings she’s been forced to attend where the company discourages workers from joining the organization.

Whenever an activist group pulls off a dramatic action, but doesn’t win immediate concessions, the challenge is how to escalate. After last week’s historic strike, OUR Walmart escalated this week by striking in more stores, in more states, for at least one day longer (and counting). The Black Friday deadline represents additional forms of escalation: issuing an ultimatum, targeting the retail giant on the busiest sales day of the year, with pledges of stepped-up involvement both from Walmart workers and from allied national groups. Given the fierce competition and outsized media attention devoted to Black Friday shoppers, the action could have a greater impact on Walmart’s brand and its bottom line. But it carries a risk: while strikes are significant even without shutting down stores, healthy Black Friday revenue for Walmart could be spun as a consumer rebuke to the strikers.

Expect other forms of escalation as well: as Salon reported yesterday, the global federation UNI has promised “joint actions” by Walmart workers internationally, and three leaders of a June strike at the Walmart supplier C.J.’s Seafood plan to organize other guest workers in Walmart’s supply chain. Meanwhile, Walmart’s efforts to expand into urban areas have hit another snag, with the company dropping plans for a Denver store weeks after failing to secure a location in East New York. This morning, I was on Democracy Now! (video below) with warehouse worker Mike Compton, who said to expect “a lot of sit-ins and a lot of walk-outs” at stores.

Like last month’s strikes by warehouse workers moving goods for Walmart contractors, this month’s strikes at Walmart stores involve non-union workers who say they were retaliated against for pushing for improvements at work. All of them have labor union backing: OUR Walmart, the organization of Walmart store workers, is closely tied to the United Food & Commercial Workers union, which has long tangled with Walmart. The California and Illinois warehouse workers are working with the labor federation Change to Win (which includes UFCW) and the United Electrical workers (UE), respectively.

Since its founding last year, OUR Walmart has called for improvements in pay, benefits, and staffing. At an OUR Walmart forum for financial analysts last week, 13-year worker Lori Amos, a former salaried manager and current backroom receiving associate, charged that systemic understaffing is undermining operations at her store in Washington state. Over the summer, said Amos, her store threw out 2,000 pounds of Halloween candy that never made it from the backroom to the shelves for Halloween. “The really sad part?” added Amos. “Management tried to sell the candy first. It was expired…the chocolate had kind of turned to a white sheen.”

OUR Walmart isn’t calling for union recognition. But members allege that Walmart has still responded to their organizing with a classic union-busting campaign: Threatening and punishing workers for organizing (this is illegal, and Walmart denies it’s happened) and mandatory meetings bashing OUR Walmart (these are legal, and Walmart doesn’t deny them). OUR Walmart and its members have filed dozens of charges against the company with the National Labor Relations Board.

Paramount, California OUR Walmart activist Carlton Smith, who took part in last Thursday’s strike, said he found “no hint of retaliation” when he returned to work Friday and Monday. Smith filed labor board charges earlier this year alleging that Walmart photographed his work site and gave him trumped-up discipline because of his activism. As for retaliation for Thursday’s walk-out, he said that he and the nine other strikers at his store have so far experienced “none whatsoever.” Smith expects that to change: “They’re waiting to see how long this goes on, and then they’ll come up with another way to probably retaliate.”

On Monday, Walmart threatened legal action against non-employees for “trespassing” during protests at its stores. In a letter addressed to several affiliates of the UFCW and to two chapters of the labor group American Rights at Work and Jobs with Justice, an attorney for Walmart said the company “reserves the right to pursue appropriate remedies with local law enforcement…” He said non-employees had entered “Walmart owned or controlled parking lots, sidewalks” and “stores” to picket or leaflet, and “created a significant disruption to Walmart’s sales and service to its customers.” The letter was provided to Salon by ARAW JWJ, whose executive director, Sarita Gupta, e-mailed, “Yet again, workers and communities have raised real concerns about Walmart’s impact on the economy, only to be shut down and threatened.”

How much bigger can these strikes get? OUR Walmart claims thousands of dues-paying members. Schlademan said these two work stoppages were “a strike of leaders.” Each of those 150 strikers, according to Schladerman, will mobilize more of their co-workers for Black Friday once they’re back at work in the stores.

“I don’t expect that they’re going to shut down Walmart, and I don’t expect that’s what they’re trying to do,” said Rhomberg. But he said that “if these waves of action succeed in bringing some kind of response from the government, or from Walmart, in terms of enforcing labor laws and employment laws, then that’s a tremendous victory for the organization. And the example will be that people will say, look, those folks in LA did it, why can’t we?”

The Walmart store workers who’ve gone on strike so far constitute only about one out of every 10,000 of Walmart’s 1.4 million US employees. But by walking off the job together, they’re sent a signal about their deep discontent, and their capacity for collective action, that no rally or press conference could. That action has many audiences: customers, investors, politicians, reporters, and – perhaps most significant at this stage – fellow Walmart workers waiting to see what happens next.