Why do we care so little about female athletes? 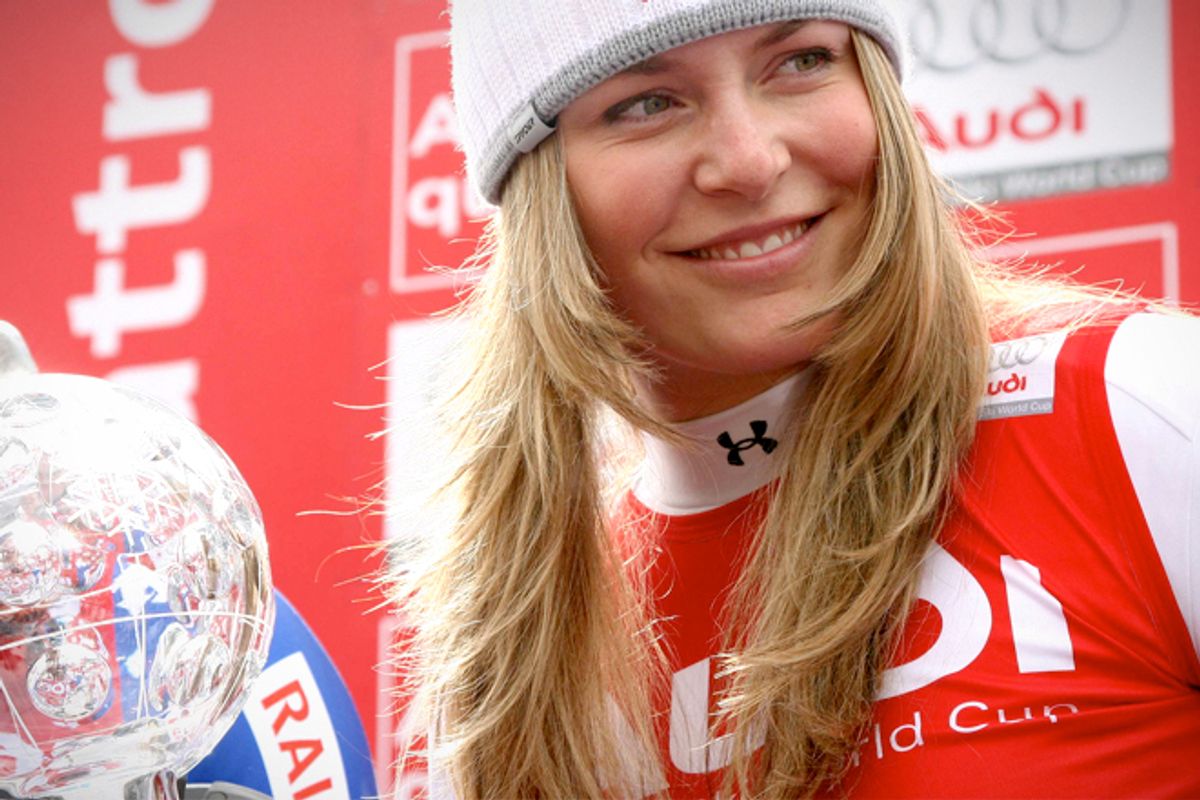 Lindsey Vonn is getting restless.

This year she set a women's record for most World Cup points scored in a season. In 2010 she became the first American woman to win an Olympic gold medal in Downhill. She's held the World Cup season title in that event five consecutive years, and she's held the overall World Cup season title (which includes Downhill, Super G, and Combined) four out of five years. She is a few years from 30, and has already earned her place as one of the greats.

The World Cup season opens at Lake Louise in November. Vonn has won nine of the 11 events she's entered there. Looking for a new challenge, she wrote to the International Ski Federation and asked if she could race with men. Competitive male athletes with the need for speed look for the fastest race, even if that means they'll lose it. That is how they get faster. That's how they surpass their limits. Men race "up" until they can't.

The fastest women in the world are not supposed to do this. They are supposed to race not against the whole of humanity, but half of it.

Officials have said that they can't respond to Vonn unless she has the backing of the U.S. federation governing her sport. The U.S. Ski and Snowboard Association must petition on her behalf. If they do, the issue will go before an international council. It gets put on an agenda and people will grandstand about this and that. As is the way of things, an interesting question will be turned into a procedural one.

The decision is twofold: If the USSA supports her request, the international council will rule on whether she can race against the men, and, if she does, whether she can also enter the "ladies" event shortly thereafter. (There are rules prohibiting unfair access to the course. It is debatable that entering one race will give her an advantage in another, so she's offered to give up a couple training runs.)

Pundits have already begun to question the hypothetical impact of her participation in the men's event on the "ladies." Jim Caple, a senior writer for ESPN.com, makes this argument on the network's website for women, espnW:

"Gender separation in competition is crucial to women's sports. It is the only way to assure athletic opportunities for all women, and it also helps build the brand; it builds the fan base. When someone chooses to compete against men (hello, Michelle Wie), she is basically telling fans, 'Don't pay attention to those girls. Pay attention to me.'"

A statement like that might give you the impression that a lot of attention is being paid to "those girls." But according to one recent study, 96 percent of attention from sports media is given to men. That leaves 4 percent for us girls: This includes media coverage of Venus and Serena Williams; the WNBA; the U.S. women's national soccer team; Olympic gold gymnast Gabby Douglas; the first year women got to box in the Olympics; and, of course, Lindsey Vonn's insane accomplishments.

It doesn't seem quite right to argue against Vonn's petition on the grounds that it might limit the attention paid to the women's event. It is not Lindsey Vonn's job to increase coverage of women's sports: That is what the people who run sports media outlets are supposed to do.

In any case, an athlete who has posed on the cover of ESPN magazine as the crotch-flashing Sharon Stone of "Basic Instinct," who has been featured in the Sports Illustrated swimsuit issue and who ranked no. 59 on Maxim's 2010 Hot 100 list knows what it takes to get the media's attention.

Where some might worry that Vonn will take the shine off that 4 percent of coverage given to her sisters, others think more apocalyptically. Giving in to Lindsey Vonn's request to race against men will encourage men to enter women's events and that's that. No more women's sports. When I talk about gender segregation in sports, this is usually the first fear people express. Women's sports struggle with a lot of problems. The lack of media coverage, the indifference of sponsors, the absence of mechanisms for addressing harassment, sexual abuse, not to mention discrimination — these are the actual problems faced by people working in women's sports.

But it is possible that Lindsey Vonn just wants to get faster. Downhill courses are mapped differently for men and women. Canadian Kelly Vanderbeek expressed support for Vonn's request, not because the men offer better competition but because the men's course is better. In an e-mail exchange with Yahoo Sport's Jim Morris she explained, "There is little to no difference from the women's track … If anything, I preferred the set for the men's track …because the flow was nicer since they set for the hill … The women's sets can sometime awkwardly turn us in order to slow us down.''

In 2007, U.S. skier Resi Stiegler created a stir when she took to the notoriously fast and scary "Bird of Prey" as a "forerunner." A forerunner is a test pilot: She races the course to test its layout. She has to be fast and strong enough to explore its limits. Bird of Prey is a men's course. Although Stiegler had been invited to run the course and had approval from all the proper authorities, as she steadied herself in the gate someone could be heard on the radio yelling "No girls allowed!" Whoever that person was, he didn't have the power stop her. Everyone shrugged it off and she flew.

When asked by a reporter to comment on that incident, Lindsey Vonn explained:

"It's just boys being boys," she said. "They can't handle that chicks can ski down the Bird of Prey. I think it's pretty sweet. If I would have been there I'd have jumped right in there with her. She created some serious havoc up there."

Five years later, Vonn is looking to take that jump and then some.

Jennifer Doyle is a Professor of English at the University of California, Riverside. She is the author of "Sex Objects: Art and the Dialectics of Desire," and writes From a Left Wing, a feminist blog about soccer. She lives in Los Angeles, California.