Narratives around political events are increasingly pre-set and substance-free 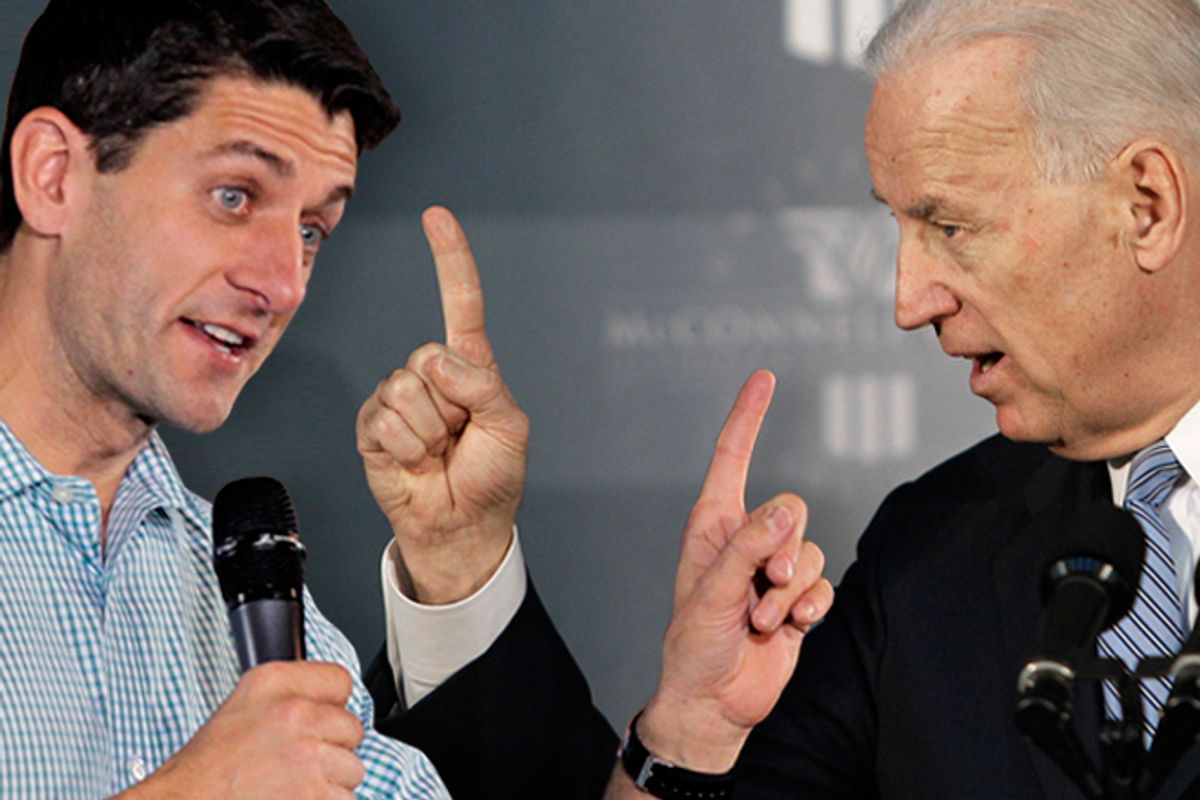 In the last few weeks, I, like so many other journalists, have received myriad invitations to attend "prebuttals" - that is, events that respond to official events, before the events actually take place. Now a standard practice in all forms of modern campaigning, whether local or national, the prebuttal, whether from candidates or activist groups, almost perfectly summarizes what's so horribly, horribly wrong with American politics.

To highlight that point, consider this morning's predictable invitation from the Obama campaign to listen in to a vice presidential debate prebuttal - one that features Democratic Party officials telling reporters that what Republican Paul Ryan will say is wrong - even though, of course, Ryan hasn't said anything at the debate yet. Yes, that's right, even though the debate features one half of the Obama ticket, and even though the debate will give that one half of the ticket adequate in-event time to respond to the other side, the campaign still feels the need to preemptively respond, before there's anything to respond to, in hopes that reporters will bake their spin into news coverage.

It's not a misguided hope. The unspoken secret of American politics is that transcripts of speeches are released under "embargo" before speeches are ever given, that talking points are preemptively released before rallies, and that prebuttals are all-important precisely because very often, articles, television reports, and radio dispatches purporting to cover events in real time were actually partially constructed before the events ever took place. Indeed, quite often, the "breaking political news" you are consuming isn't "breaking" at all - you are being force-fed a prefabricated collage of press releases, talking points and "prebuttals" that were forged long before the scripted event in question took place. The political process, in other words, has been fully automated, substituting spontaneous democratic foment for that iconic scene in Real Genius - the one in which pre-set tape recorders are talking to tape recorders.

The result, of course, is that no matter what happens at a particular political event, the narratives of such events (who's "up," who's "down," what the best "message" was, etc.) are largely set in stone before any truths or lies are ever aired. With reporters having already invested time and work in stitching the prebuttal spin into their upcoming stories, and with electronic media hyping the prebuttal fodder into its own pre-game coverage, outcomes are effectively predetermined - or at least ramrodded into storylines that may have little to do with what really happened, and worse, almost nothing to do with any substantive, policy-focused exchange of actual ideas.

And so, again, consider tonight's vice presidential debate. For all the hype to the contrary, it hardly matters what the two candidates say. Both sides are already prebuttal-ing each other, effectively guaranteeing that the event will be reprocessed as a competition between prefabricated talking points. Sure, the event itself might be feature genuine moments of debate - ie. two people actually talking to each in an actual conversation - the maw of the Media-Campaign Complex is already chewing it up and preparing to spit it out as yet another substance-free, Manichean all-or-nothing clash between two competing sports teams (sidenote: this manipulative process is why there's more of a civic imperative than ever to actually watch the full debates and ignore the pre- and post-event spin from the media). We saw this with the media's presidential debate focus on "winners" and "losers" rather than on what policy areas the candidates surprisingly agreed on. And we will undoubtedly see it again tonight.

Of course, it's certainly true that in many elections, we already know where the candidates stand on issues, thanks to voting records, campaign platforms and past statements. But that doesn't mean political events - and especially debates - have no value, and should have the substance wrung out of them by the prebuttal impulse. After all, in a country that seems intractably divided along ideological, partisan and demographic lines to the point where different sides seem absolutely unable to converse with one another, debates and the coverage surrounding of them could offer an example of civil, if pointed, discourse - the kind of give and take we desperately need if we are going to find consensus on anything.

This is the point forgotten - or, more likely, deliberately ignored - in our modern election campaigns. For all the potential for transpartisan coalitions and unity to bridge the ideological differences tearing apart America, we will never be able to find any modicum of consensus on anything if we embrace a politics of the prebuttal - a politics that says we should never listen to one another, never engage in any kind of discussion, and instead always try to aggressively respond to words that haven't yet been spoken.

In this, our political parties and media outlets see an obvious financial upside. In constantly encouraging us to presume bad faith from those with whom we disagree, they generate campaign contributions and ratings, respectively. But in the process, the prebuttal-ization of our politics prevents any possibility of finding common ground. Simply put, responding before there's anything to respond to - and then baking those responses into the overall narrative - shuts down the prospect of discourse, perpetuating the political war of attrition without regard for trying to solve the moment's imminent crises.