Is Ben Affleck one of this generation's greatest filmmakers?

With "Argo," Affleck is poised to surpass the legacy of fellow actor-turned-director Clint Eastwood 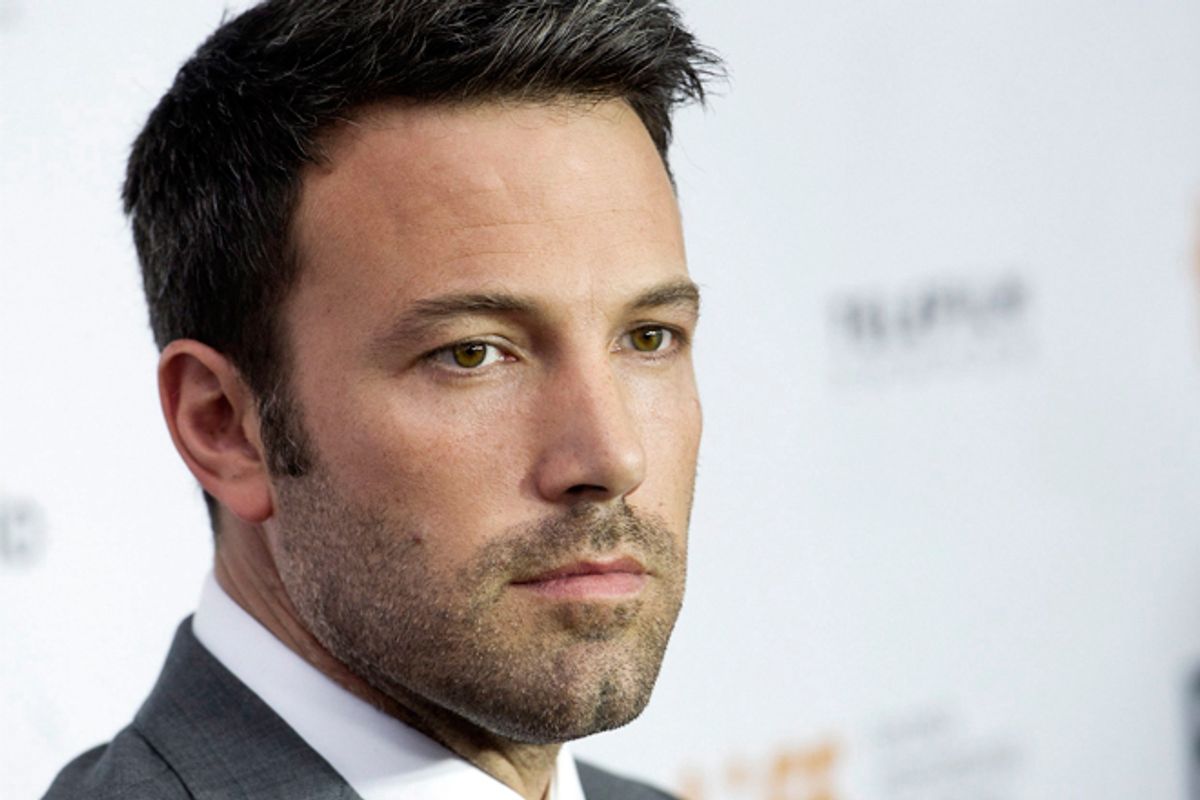 Film archives are littered with movies about real movies — "Shadow of the Vampire," about the making of "Nosferatu"; "My Week With Marilyn," about "The Prince and the Showgirl." And there are those about the making of fake movies: Fellini’s "8½," Truffaut’s "Day for Night."  Ben Affleck’s "Argo" must be some kind of first: a movie about a real fake movie. Considering that the material on which "Argo" is based was declassified in 1997, it’s amazing that the story didn't inspire a movie much sooner.

It’s historical,  as I’m sure you know by now. It details how six American hostages were whisked out of Iran after the takeover of the U.S. Embassy in 1979. It’s political, offering a fair and incisive account of how both the American CIA and the Iranian rebels contributed to the crisis. And it reintroduces suspense as the primary element in a thriller.

After directing two fine films that were top-heavy with violence, “Gone Baby Gone” and “The Town,” Affleck has now made a movie almost devoid of violence but long on suspense. The biggest surprise of all: “Argo” is hip. It keeps getting the audience to hold its collective breath only to let it out laughing.

The brilliance of “Argo” begins with Affleck’s uncanny talent for casting, including himself as Tony Mendez, the real-life “exfiltration” specialist who came up with an idea so ridiculous it would have been rejected by any Hollywood studio: disguise six Americans hiding in the Canadian embassy as part of a crew for a phony science fiction potboiler to smuggle them out of Iran. Affleck gives a fine, unshowy performance, interacting with more experienced actors such as John Goodman’s real-life makeup man, John Chambers, and Alan Arkin’s fictional producer, Lester Siegel, as well as Bryan Cranston as Mendez’s real-life intelligence boss, Jack O’Donnell. (Arkin gets the best lines. When Affleck asks him if he can teach someone to be a director in just one day, he shoots back, “I can teach a rhesus monkey to be a director in one day.” Cranston also snaps off a couple of good ones; the Argo scheme, he admits to his superior, “is the best bad idea we have.”)

But it’s as a director that Affleck makes an impact. “Argo” is taut but never overwrought, witty but never facetious. If you didn’t know that Ben Affleck directed the film, you might think you were watching the work of an exciting young director on the verge of greatness. Then, maybe you are. Affleck is catching the critical establishment by surprise — in the New Yorker, Anthony Lane sees “Argo” as “further proof that we were wrong about Ben Affleck” — but it shouldn’t. Or rather, we should have all been waiting for this.

Affleck has been taking cheap shots for years for doing movies such as “Pearl Harbor” and “Armageddon” as if he was the only actor in those movies or the only actor who appeared in big-budget noisemakers. Here’s David Thomson in the 2002 edition of “The New Biographical Dictionary of Film”: “Mr. Affleck is boring, complacent and criminally lucky to have got away with everything so far. If there was any doubt in my mind, it was settled by the mere presence – and it wasn’t anything more than mere – of Affleck in the travesty called ‘Pearl Harbor.’“

At the time Thomson wrote that, Affleck had shared an Oscar with Matt Damon for the “Good Will Hunting” screenplay, turned in a ferocious cameo as a snake-oil stockbroker in “The Boiler Room” and performed creditably in “Shakespeare in Love.” Some people, like Affleck, are born to be underrated; some, like Clint Eastwood, are born to be wildly overrated.

Here’s Thomson, from the same volume, on Clint: “Has it occurred to you that, by 1994, Clint Eastwood was among the very few Americans admired and respected at home and abroad, without qualification or irony? When the one-time mayor of Carmel insists that he is not running for anything else, we feel regret.” Well, it certainly hasn’t occurred to me since the Republican convention, but in truth it had never occurred to me at all.

Let’s compare Ben and Clint. In 2006, Affleck gave a poignant, nuanced performance as the doomed George Reeves, TV’s Superman, in “Hollywoodland.” Anthony Lane said it best: “I have rarely warmed to Affleck, except for his bastard turn in ‘Boiler Room,’ but here he delivers a lovely study of a star, both shooting and falling: tall, dark, handsome, but wise to the fate of all vanity, and, though hardly whip-smart, by no means dumb enough to be happy with his lot. For every Burt Lancaster, there have been thousands of George Reeveses, and Affleck pays them the kind of fond homage — an offer of limelight — that they otherwise never get.”

It’s likely that Affleck, who was 34 when the film was made, saw in Reeves’ sad life and career a premonition where his own career might be headed. Perhaps the role drew reserves of depth and emotion from him that simply hadn’t been called on before. Was it because the film was not a commercial hit that so many critics missed this turn in Affleck’s career? Whatever, I would submit that between “The Boiler Room” and "Hollywoodland" Affleck showed more acting chops than Eastwood in his entire career, in which he has gone from TV show to film after film giving the same performance.

The next year saw another side of Affleck that no one knew existed when he adapted (with Aaron Stockard) and directed “Gone Baby Gone” from Dennis Lehane’s detective novel, with his brother Casey as the lead. In Affleck’s hands, “Gone Baby Gone” broke through the constraints of genre thriller to genuine drama, if not tragedy, and pushed Casey Affleck and Amy Ryan into the public eye. (Ryan was nominated for an Oscar for best supporting actress for her role.)

In 2010 Affleck took the crime story to yet another level with “The Town,” a richer and more honest study of the South Boston crime ghetto than Scorsese’s “The Departed,” and confirmed Jeremy Renner (who earned an Oscar nomination as best supporting actor) as a star.

Affleck’s first three films are better than Eastwood’s first three, and by a wide margin. And as the younger director matures, he will be capable of, at the least, surpassing such lead-footed Eastwood clunkers as “The Eiger Sanction,” “The Rookie,” “A Perfect World,” “Midnight in the Garden of Good and Evil,” “Changeling,” “Hereafter,” “J. Edgar” and perhaps even Eastwood’s best film by far, “Mystic River” – territory Affleck is already fast approaching.

In 2004, the first season of “Entourage,” Jeremy Piven’s agent terrible, Ari Gold, tries to bully Adrian Grenier’s Vinnie Chase to make better career decisions, “Who do you want to be? Matt Damon or Ben Affleck?” At the time, of course, the question was rhetorical – Affleck was still a punch line for Conan O’Brien and David Letterman. What a difference a few years make.

With “Argo,” it’s time to simply acknowledge that we’ve all been wrong about Affleck. He’s one of the most exciting filmmakers of the 21stcentury.