Joe Biden gets the job done

He fired up the Democratic base and made Paul Ryan look like a teenager. Oh yeah, and he laughed a little 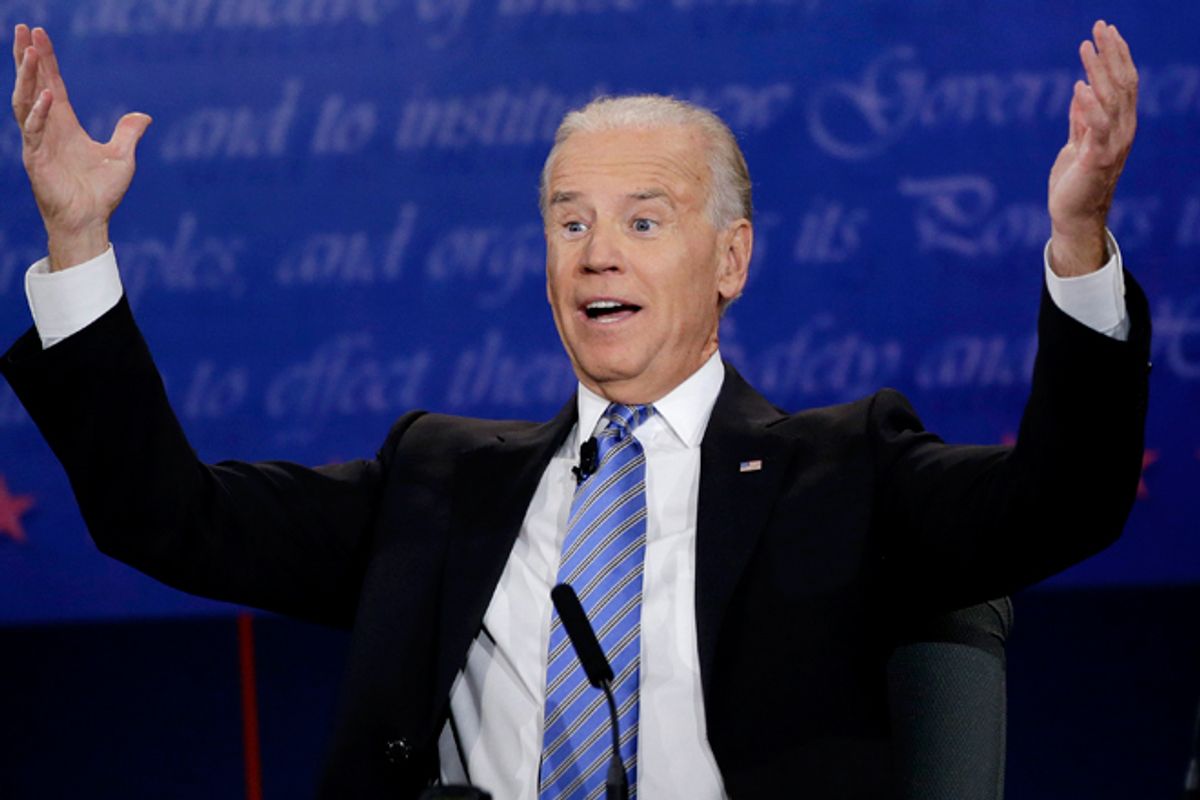 Joe Biden wiped the floor with Paul Ryan at Thursday night's debate, but we might have to spend a day debating whether he laughed too much while doing it.

On Medicare, on taxes, on abortion, on middle class opportunity and on foreign policy, Biden made Ryan look like he was trying out for the college debate team, and on substance, he pinned him to his and Mitt Romney's least popular policies.

With an assist from tough, informed moderation by Martha Raddatz, who actually asked whether preventing Iran from getting a nuclear weapon was worth another Middle East war – Ryan said yes – Biden did everything President Obama didn't last week. In some of the debate's best moments, he hung Ryan and Romney with Romney's 47 percent remarks replying to a question about unemployment. This is my favorite:

These people are my mom and dad -- the people I grew up with, my neighbors. They pay more effective tax than Governor Romney pays in his federal income tax. They are elderly people who in fact are living off of Social Security. They are veterans and people fighting in Afghanistan right now who are, quote, "not paying any tax."

I've had it up to here with this notion that 47 percent -- it's about time they take some responsibility here. And instead of signing pledges to Grover Norquist not to ask the wealthiest among us to contribute to bring back the middle class, they should be signing a pledge saying to the middle class we're going to level the playing field; we're going to give you a fair shot again; we are going to not repeat the mistakes we made in the past by having a different set of rules for Wall Street and Main Street, making sure that we continue to hemorrhage these tax cuts for the super wealthy.

That's the most important point: Biden told a compelling story about the contrasting Democratic and Republican views of the country, throughout the debate. By contrast, Ryan turned the same question into a rambling story about Romney's personal generosity to a family who lost children, with no narrative about the government's role in helping those who struggle.

But there were other great exchanges that illustrated the enormous gulf between the two men, on both ideology and experience. After Ryan railed against the 2009 stimulus, a chuckling Biden interjected: I love my friend here…He sent me two letters saying, "By the way, can you send me some stimulus money for companies here in the state of Wisconsin?" We sent millions of dollars." Ryan replied sheepishly, "On two occasions we -- we -- we advocated for constituents who were applying for grants. That's what we do. We do that for all constituents who are..." And Biden interjected: "I love that. I love that. This was such a bad program and he writes me a letter saying -- writes the Department of Energy a letter saying, "The reason we need this stimulus, it will create growth and jobs." His words. And now he's sitting here looking at me."

A little later, when Ryan got tangled up in explaining how his and Romney's plans to cut taxes would nonetheless cut the deficit, he claimed President Kennedy did it, and a laughing Biden pounced: "And now you're Jack Kennedy?" He also turned to the camera and talked directly to seniors when Ryan accused the White House of cutting Medicare to fund "Obamacare," asking "Any senior out there, ask yourself: Do you have more benefits today? You do. If you're near the donut hole, you have $600 more to help your prescription drug costs. You get wellness visits without co-pays."

On foreign policy, Ryan sounded even more poorly informed and occasionally dangerous. His worst moment came when he committed the U.S. to war to prevent Iran from nuclear weapons; Biden didn't rule out war but said -- predictably, safely and sanely -- that it should be a last resort. Ryan's second worst foreign policy moment was when he tried to explain how he and Romney supported the Obama-Biden timeline for getting leaving Afghanistan in 2014 – but they opposed timelines in principle. Biden, though, stumbled when he evaded Raddatz's questions on the Benghazi attack and seemed to contradict the testimony of State Department officials that they had asked for more protection.

Biden probably smiled and laughed too much. He showed a lot of teeth, occasionally looking like he really wanted to bite Ryan, not merely reply to his arguments. During the opening minutes alone he interjected with "That was a bunch of malarkey" and "Not a single thing he said is accurate" and "Incredible!" and "Oh God!" If I had been in a control room talking into his ear, I'd have told him to calm down. At some point, I think Jill Biden or someone in the audience must have given him a cue to tell him to dial it back, because half way through, he did. Or else his 5-Hour Energy drink wore off in four and a half. Yet watching clips of the debate -- which is what most people will see in the coming days -- Biden won virtually every exchange.

A sober Biden hit the right tone when Raddatz, maybe a little oddly, asked the two Catholic men how their religion influenced their thinking on abortion. "Life begins at conception in the church's judgment. I accept it in my personal life," Biden said. "But I refuse to impose it on equally devout Christians and Muslims and Jews, and I just refuse to impose that on others, unlike my friend here, the -- the congressman. I -- I do not believe that we have a right to tell other people that -- women they can't control their body." Ryan, by contrast, when asked by Raddatz if whether pro-choicers should worry "if the Romney-Ryan ticket is elected," drew a deep sigh, paused, and let loose with this: "We don't think that unelected judges should make this decision; that people through their elected representatives in reaching a consensus in society through the democratic process should make this determination." Contrast the heart in the two replies.

Likewise, in his closing statement, Biden returned to Romney's comments about the 47 percent, and said:

And the president and I are not going to rest until that playing field is leveled, they, in fact, have a clear shot, and they have peace of mind, until they can turn to their kid and say with a degree of confidence, "Honey, it's going to be OK. It's going to be OK." That's what this is all about.

It was a stark contrast with Ryan's closing remarks, delivered with the cadence of a high school junior practicing a student council speech:

Apparently pundits squabbled about Biden's delivery, and Fox's Chris Wallace declared "I've never seen a candidate as disrespectful as Biden." The pearl-clutchers might have the vapors, but Democrats are revived by Biden's aggressive performance, in contrast with his boss's listless one. In five days, Obama will face Romney again and all of this will matter much less. But Biden dialed down Democratic panic and reminded Americans he's part of a team that's fighting for them.