We call out the candidates' distortions, exaggerations and lies -- in real time 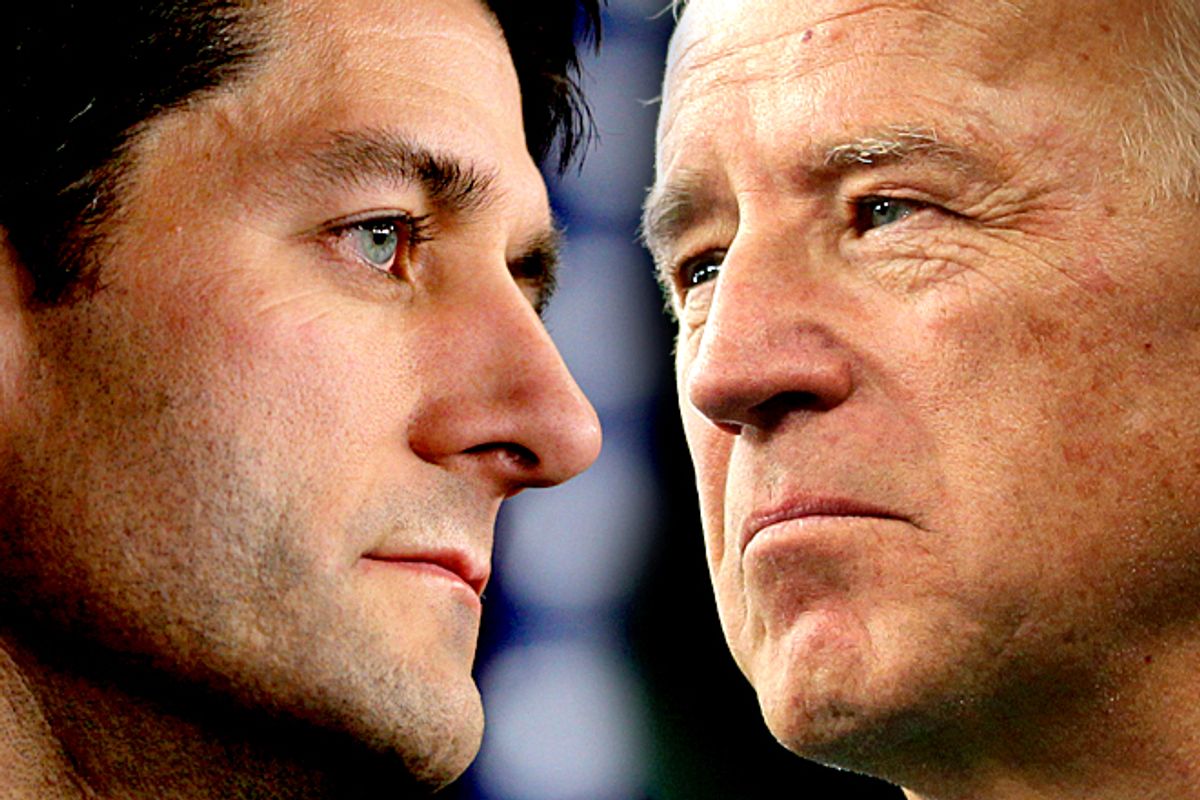 Salon’s Alex Seitz-Wald will be live at 9:00 Eastern time this evening to begin fact checking the vice-presidential debate. Come back then to get the truth behind the distortions, exaggerations and outright lies we'll no doubt hear tonight. Research help from our intern Zachary Bell.

10:20 -- When are we getting out of Afghanistan? Biden emphatically states that the U.S. will be out of Afghanistan by 2014. "We are leaving. We are leaving in 2014. Period." Well, sort of. While the vast majority of the troops will be gone, the U.S., NATO, and Afghanistan agreed to leave and "enduring presence" of perhaps 10,000 troops to help train Afghans past 2014. The troops will not play combat roles and the Afghan government will assume full security of the country, but Biden exaggerated a bit.

10:10 -- Troops in Libya: Ryan said "nobody is considering sending troops to Syria." In August,  Gov. Romney told CBS News that he would send U.S. troops to Syria if necessary to prevent the spread of chemical weapons. In his interview with CBS, Romney said, "I think we have to also be ready to take whatever action is necessary to ensure that we do not have any kind of weapon of mass destruction falling into the hands of terrorists and whether that requires troops, or whether that requires other actions by our friends and allies."

10:05 -- Biden forgets he voted for Iraq war: Biden hits Ryan on spending by saying the congressman voted  "to put two wars on a credit card." But Biden also vote to authorize the war in Iraq, and voted to give Bush “all necessary and appropriate force” to respond to the terror attacks, which led to war in Afghanistan.

10:00 -- Small Navy? Paul Ryan says Obama would reduce the Navy to its smallest size since World War I. Politifact gave that claim a Pants on Fire and called it ridiculous.

9:55 -- Sequester two-step: Ryan attacks Biden for automatic defense cuts that will go through if Congress does not act. Those cuts come from the "sequester," the automatic trigger mechanism created by the congressional deal to raise the debt ceiling. You know who voted for that plan? Paul Ryan.

9:50 -- Tax plan adds up? Asked by the moderator if he can "guarantee" that Mitt Romney's tax plan adds up, Ryan says, “Six studies have verified this plan adds up." Among the “studies” included in that figure are two Op-Eds and white papers written by the campaign or economists connected to the campaign. The most comprehensive and well-respected study done so far from the nonpartisan Tax Policy Center finds that the numbers do not add up. Not by a long shot.

9:45 -- Social Security and Medicare are not going broke: “Social Security and Medicare are going bankrupt. These are indisputable facts,” Ryan says. Actually both are disputable and neither are facts. People have been saying Social Security is going to go bankrupt for decades, it hasn’t yet, and it’s not going to. It's currently projected to be fine for at least 40 years. Medicare is in more peril, but it is still nowhere close to anywhere near going bankrupt anytime soon. And Obamacare actually extended the life of the Medicare trust fund.

9:40 -- Ryan's healthcare plan is bipartisan? Ryan claimed that his Medicare proposal was co-sponsored by a Democrat. He was referring to Sen. Rod Wyden of Oregon, who did create a plan to change Medicare, but once Republicans adapted it, he distanced himself from the bill this summer. In response to Romney's continued claims on the campaign trail that the bill was bipartisan, Wyden told the Oregonian in August, "Bipartisanship requires that you not make up the facts. I did not 'co-lead a piece of legislation.'"

9: 30 -- Paul Ryan requested stimulus money: Joe Biden calls out Ryan for sending two letters requesting stimulus funds for his district, despite attacking the program. "We do that. We advocate for constituents' interests," Ryan said in response. That's a new answer for Ryan, who previously blamed his staff. It's actually his third answer. First, he said, “I never asked for stimulus." Then, after being caught, he blamed his staff for allegedly mishandling the economy. “After having these letters called to my attention I checked into them, and they were treated as constituent service requests in the same way matters involving Social Security or Veterans Affairs are handled. This is why I didn’t recall the letters earlier. But they should have been handled differently," he said in a statement. So his defending of the requests tonight is a bit of a departure. It's also worth noting that Ryan supported the 2002 stimulus package proposed by George W. Bush.

9:20 -- How long has Biden known Bibi? Biden claimed he's known Israeli Prime Minister Benjamin Netanyahu for "39 years." But as the Daily Beast's Peter Beinart notes, that's almost certainly impossible, as Netanyahu was an undergrad at MIT at the time. More likely, they met about 20 years ago.

9:15 -- Biden flubs on Libya: "We weren't told they wanted more security... We did not know they wanted more security there," Biden said when Ryan challenged him on the attack. As the Washington Post pointed out that, that claim is "contradicted by State Department officials just the day before, in testimony before a congressional panel and in unclassified cables released by a congressional committee."

9:10 -- Marines: Paul Ryan, noting that there's a Marine detachment at the U.S. Embassy in Paris asks, "Shouldn’t we have a Marine detachment?" in Libya. The infatuation with the Marines belies a deep misunderstanding of the role the service members play in foreign embassies. The Corps actually protects information, not personnel. And with only a little over 1,000 Marines serving as guards around the world, there are very few in any diplomatic post.

9:05 -- Diplomatic security: The debate opened up with a discussion of the attacks on U.S. diplomatic posts in Libya, with Paul Ryan attacking Biden for the Obama administration supposedly not doing enough to protect diplomats. But  Ryan's budget plan would cut diplomatic security and House Republicans have already tried to do so. "For fiscal 2013, the GOP-controlled House proposed spending $1.934 billion for the State Department's Worldwide Security Protection program -- well below the $2.15 billion requested by the Obama administration," the Washington Post's Dana Milbank reported. In 2009, Ryan was one of 156 Republicans members to voted for an amendment to "reduce funding for Diplomatic and Consular Programs by $1.2 billion," as the official record states. Rep. Jason Chaffetz, the Utah Republican who has been leading the charge on Libya in Congress, admitted on CNN this week that he "absolutely" voted to cut the diplomatic security budget.