The man behind a notorious dogfighting ring catches grief for an innocuous family photo. It's time to forgive him 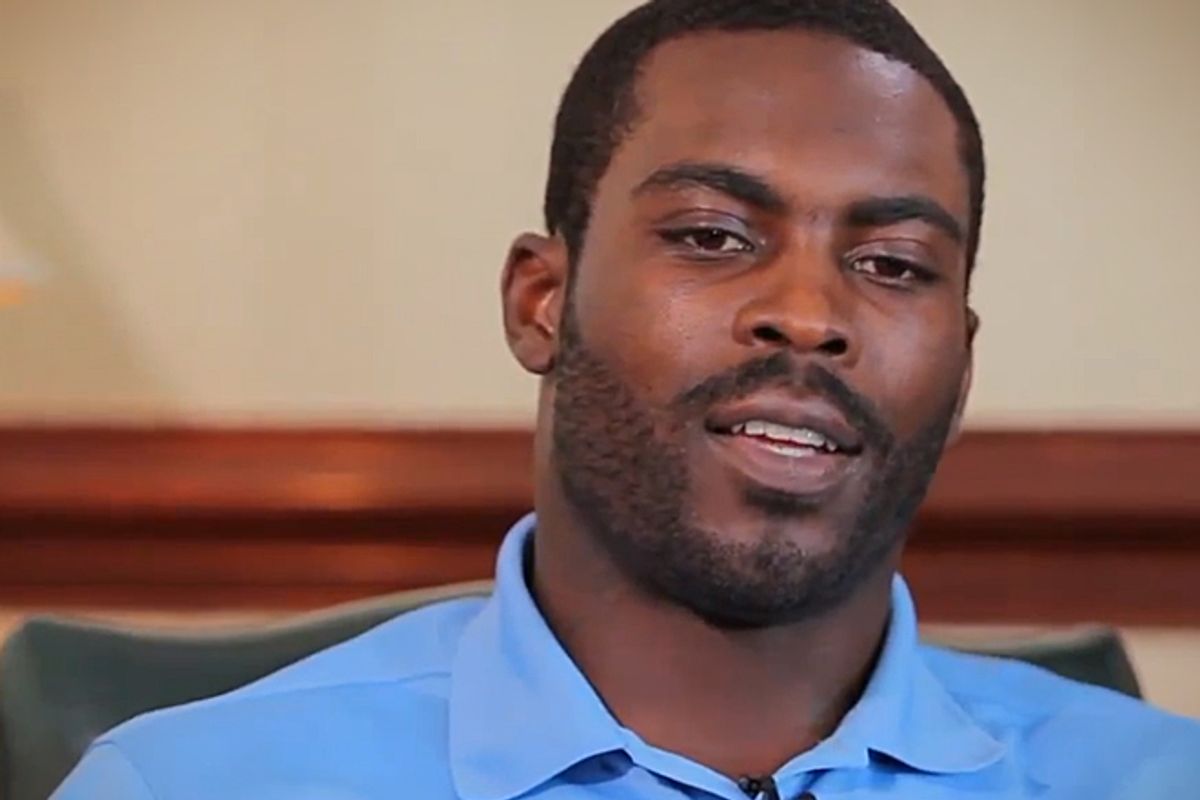 It wasn't the sort of thing a man with his reputation was going to brag about. But last week, Vick tripped up when he tweeted a photograph of himself innocently hanging out with his daughter, mutually engrossed in different projects, with the caption "we working." Within moments, a sharp-eyed Crossingbroad.com contributor noted something interesting about the photo, observing, "Unless Michael Vick is eating Milk Bones, he has a dog. Look at the top right of the picture." And Vick, almost as quickly, posted a different photo of the same tableau, this time with no damning box of Milk Bones in the shot.

For days afterward, Vick demurred on the subject of whether his family owned a pet, telling Philly.com, "I’m here to strictly talk about football. What goes on in my personal life is not to be talked about. What’s most important right now is the Philadelphia Eagles and getting the win Sunday."

You can understand Vick's reticence to reveal whether or not there are canines under his roof. As soon as the possibility of his dog ownership got out, the Philly.com commenters were quick to label him a "chronically sick, depraved individual" and ask, "Why would anyone let this man near a dog, let alone [allow him to] own one?"

It was a response Vick has heard before, one that cropped up two years ago, when he was still forbidden to own a dog but admitted to TheGrio, "I would love to get another dog in the future." Back in July, Vick told Piers Morgan he "maybe" wanted a dog, saying, "I still deal with my kids each and every day, and for the last three years, not being able to have a dog because of my acts … I just don’t think that's fair. It may be something that's therapeutic in that for them, and I can't take that dream away from them. That's selfish on my behalf." His stated desire was quickly greeted with the expected "Once a monster, always a monster" commentary.

That's why he must have known the Milk Bones question wasn't going to be avoided forever. On Thursday, he issued a statement: "I understand the strong emotions by some people about our family’s decision to care for a pet. As a father, it is important to make sure my children develop a healthy relationship with animals. I want to ensure that my children establish a loving bond and treat all of God’s creatures with kindness and respect. Our pet is well cared for and loved as a member of our family. To that end, I will continue to honor my commitment to animal welfare and be an instrument of positive change."

The confirmation was greeted with both cries of outrage and words of support that "Everyone deserves a second chance." But Mike Peralta, COO of the Pennsylvania SPCA, told ESPN, "I would say, doing humane law-enforcement work and fighting dogfighting here in the city of Philadelphia, if someone with a dogfighting background of any type came to adopt with the Pennsylvania SPCA, we would not adopt to them."

Vick, who has been out of prison for three years now, regularly volunteers with the Humane Society, speaking out on animal cruelty and lobbying for tougher laws against animal-fighting spectators. The organization declined to comment about Vick's dog ownership, but two years ago, its president Wayne Pacelle wrote, "Pet-keeping is a privilege and he lost that privilege when he committed atrocious acts of cruelty in the months and years before his arrest in 2007." But he added, "If a perpetrator serves time and gets counseling, and if they show they can be an upstanding member of society, then maybe, under the right circumstances and after several years of not being allowed to have a pet, then they could have their pet-keeping privileges reinstated. Where the human-animal bond has been broken, we want it to be restored … We must be open to the possibility that rehabilitation is possible, and faithful to our hope that people can change."

That's a tall order. That kind of openness to possibility demands mercy of those who have been horrendously unmerciful. It asks for compassion for a man whose dogfighting ring drowned, electrocuted and beat animals to death. For many, Michael Vick will go to his grave as the dogfighting guy. He'll be forever frozen in amber as the man he was in 2007. But the test of anyone's life is his whole life. Not just the darkest, most terrible things in it but what he does with himself afterward. Who he molds himself to be from those things he's done, and whether or not he can reach into himself and be a force for change — not in spite of his crimes but because of them. Because when he speaks of evil, he speaks with authority. And because, as the terms of his parole surely understood, the only way to know whether a man has reformed is to give him the opportunity to prove it.