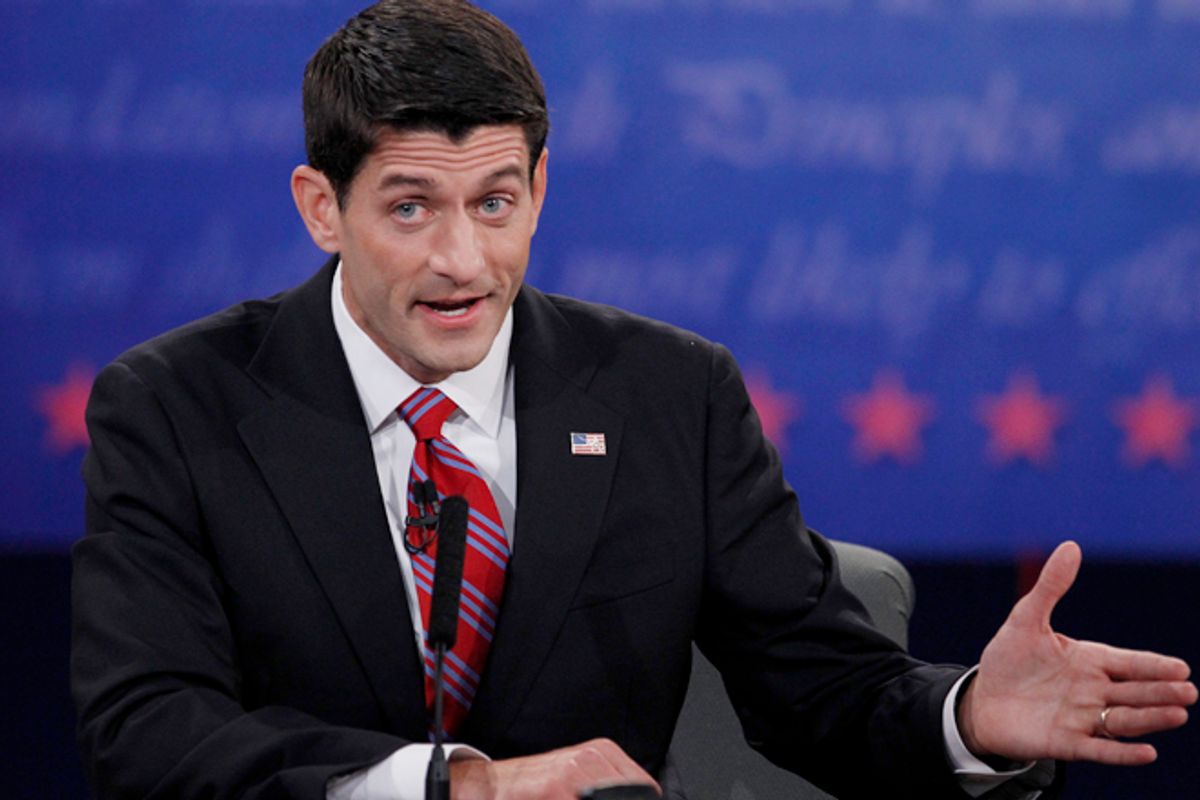 If the gods punished political candidates for chutzpah, there was one moment during the vice-presidential debate when a dozen lightning bolts from the hand of Zeus should have instantly fried Paul Ryan into cinders.

In the middle of an exchange on tax policy, Ryan looked at Biden and said, "You know, I understand you guys aren't used to doing bipartisan deals ..."

We're all accustomed to unlimited portions of self-serving cant from our politicians, Democratic or Republican, but to hear a currently serving Republican member of Congress accuse the Obama administration of being insufficiently bipartisan severely tests the limits of whatever patience or restraint we are still clinging to as this presidential campaign careens toward its end.

During the Obama administration, the Republican Party defined itself through explicit, extreme partisanship unprecedented in modern American history. They operated in accordance with Senate Minority Leader Mitch McConnell's no-bones-about-it declaration, "The single most important thing we want to achieve is for President Obama to be a one-term president.”

No party has ever abused the filibustering process as much as Republicans have done since the Democrats took control of the Senate in 2006. No party has ever abused procedural rules as part of a strategy to block or delay votes on White House appointees as doggedly as the current Republican Party. Obama's health plan was designed specifically to incorporate conservative ideas and preserve a role for private sector insurance companies, but did not receive a single Republican vote in the Senate. Obama's stimulus incorporated huge tax cuts explicitly aimed at courting Republicans but received only three votes from Republicans -- at a time when warding off an oncoming depression was the single most important task for the government. In the struggle to reach budgetary and debt ceiling votes, Obama repeatedly offered larger concessions than his own party was comfortable with making, and still was rebuffed by the opposition.

Political deals require compromises in which both sides end up at least a little bit unhappy with the result. The current incarnation of the Republican Party defines itself by its unwillingness to compromise at all. It's a point of pride. Paul Ryan -- a member of the Simpson-Bowles Commission -- voted against the commission's budget recommendations primarily because it included revenue-generating measures that the current Republican Party deems anathema.

It's certainly true that Republican obstructionism appears to represent constituent desires. Fair enough. Republicans have a legal right -- and, in their own view, a moral obligation -- to block President Obama's initiatives. But what they can't do is then turn around and accuse Obama and Biden of being insufficiently bipartisan. The record indicates otherwise.