"The Walking Dead" ups the carnage

The new season offers a lot more of the same, but still manages to sneak in a few scenes of elegiac poignancy 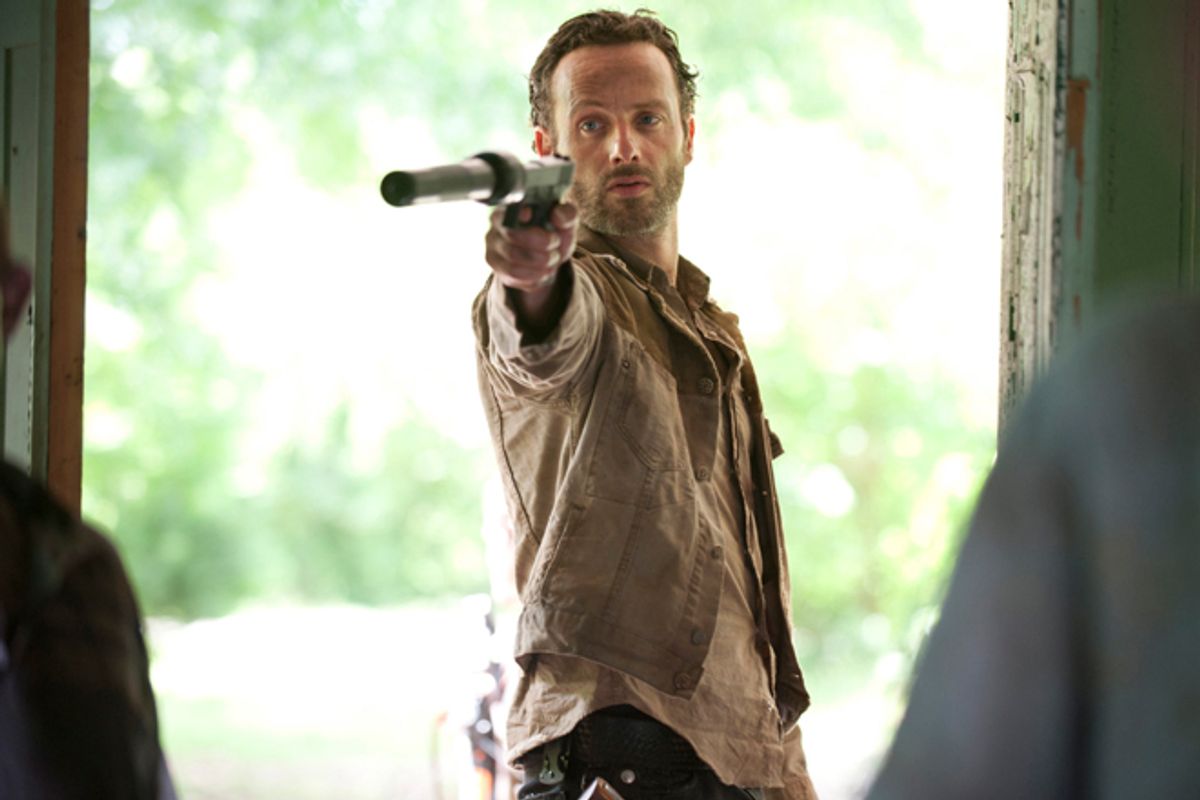 The fun of apocalypse stories rests on a simple act of identification: We imagine ourselves to be the survivors. If almost every human being on the planet died in some history-ending catastrophe, chances are you would too — but who wants to think about that? More entertaining, more flattering to pretend you would have the guts, the acuity, the luck to survive, just like the characters you’re following on the page or screen.

But surviving in a destroyed world might turn out to be a harrowing drag, endless, taxing, filthy and dull. As time wore on, it would probably become clear that more than will, intelligence or skills, it really was luck that was the key to your survival. As even more time passed, you’d have to face that unlike most survivors in the apocalyptic fictions you’d previously enjoyed — everything from “Riddley Walker” to “A Canticle for Leibowitz,” from “Contagion” to NBC’s “Revolution” and Justin Cronin’s “The Passage” saga — you were not equipped to save the world. Yes, you survived, but you were merely a regular survivor, a grieving, angry, hungry person desperately in need of a shower and a safe place to sleep, fated to struggle and die, leaving the world saving to some other generation, some other truly spectacular survivor, or, more likely, to no one at all.

AMC’s “The Walking Dead,” which begins its new season on Sunday night, is basically the above show, a series dramatizing the lives of a group of survivors so mired in the day-to-day of living they have no time to ponder the big questions because they’re just trying to sleep without being stampeded by a herd of zombies. The problem is that the people running “The Walking Dead” (and I’m talking just about the show, not the Robert Kirkman graphic novels on which it's based) have not, unlike Cormac McCarthy with “The Road,” totally embraced the super-depressing vision of living they’re putting on-screen each week. They keep pretending this band of survivors, and especially their leader Rick Grimes — who along with his wife, Lori, is easily the least interesting person on this show — are something special, something heroic. “The Walking Dead” is extremely realistic about the decayed, vast, destroyed world, and dopily idealistic about its main character.

This disconnect can make the show extremely frustrating. Past episodes have been slow and meandering, as if the repeated speeches and tortured psyches of these super-regular people are what’s interesting, and not, you know, the zombies outside. When zombies do show up, all the group’s strategizing is often shown to be for shit; instead of escaping the farm while they have a chance, they decide to ineffectually shoot at thousands of zombies for half an hour or so first. This is exactly what you would expect from a group of regular people, but the show won’t acknowledge how boneheaded they’re often being.

The new season picks up months after the last one left off — we’ve skipped over the winter. (How this particular posse survived the cold months fully intact is anybody’s guess, but I’m thankful for missing episode upon episode of Carl shivering around a fire anyway.) The band of survivors — Rick, his estranged and now very pregnant wife, Lori, his son Carl, Carol and Darryl who may or may not end up a rhyming couplet (if you know what I mean), the underdeveloped T-Dog, old guy Hershel, and Glenn — have spent the cold months moving from house to house, never staying in the same place. They’re exhausted and hungry, but not so exhausted and hungry that Rick will let his son eat a perfectly good can of dog food, a ruling that’s supposed to mean he has standards but in context seemed to me like further proof he’s rigid and delusional.

Rick finally figures out a place where the group can hole up safely and indefinitely: a prison. They can lock themselves in and lock the zombies out. In case you missed the metaphor — which, is actually pretty awesome even if it is on-the-nose — in the grotesque new world, freedom can only be found in jail. The group spends the first two episodes clearing out cell blocks, which means, thankfully, there’s no lack of action, zombies, disgusting amputations and Tarantino-esque sword play. (As for Michonne, the eagerly anticipated, sword-wielding heroine, she only gets two scenes in the first two episodes, just enough to make me wonder why she leaves all those heads she decapitates lying around like a trail of immobile, but biting booby traps.)

Sometime in the off-season, both Rick and Carl have decided that they more or less hate Lori, even though at the end of last season, Rick was the one asking for Lori’s forgiveness for killing Shane, her maybe baby-daddy. Months later, the paternity of Lori’s child is a topic that’s not being discussed much. As Rick puts it, in perfect asshole-ese, “You want to talk. Talk to Hershel. I’m doing things.” Carl, meanwhile, has gotten really handy with putting down zombies, though most of his development happens off-camera. He’s adapting to his circumstances more fully, and with more bravery and reckless brutality than almost anyone around him, but “The Walking Dead” would rather pay attention to Rick, busy adapting by "heroically" becoming inhumane to everyone he doesn’t know already.

And still there are moments of creepy elegance and elegiac morbidity in “The Walking Dead” that no show on TV can match. Carol, hoping to practice her C-section technique, kills a female zombie to use as a cadaver. Preparing to employ her scalpel, she pulls up the zombie’s dress, revealing an extremely soiled, chaste pair of underwear. These panties are unsettling, grotesque and nearly as poignant as those in “The Sound and the Fury.” This zombie was a person once, a reminder of the past and, if the survivors aren’t lucky, a message from their future.