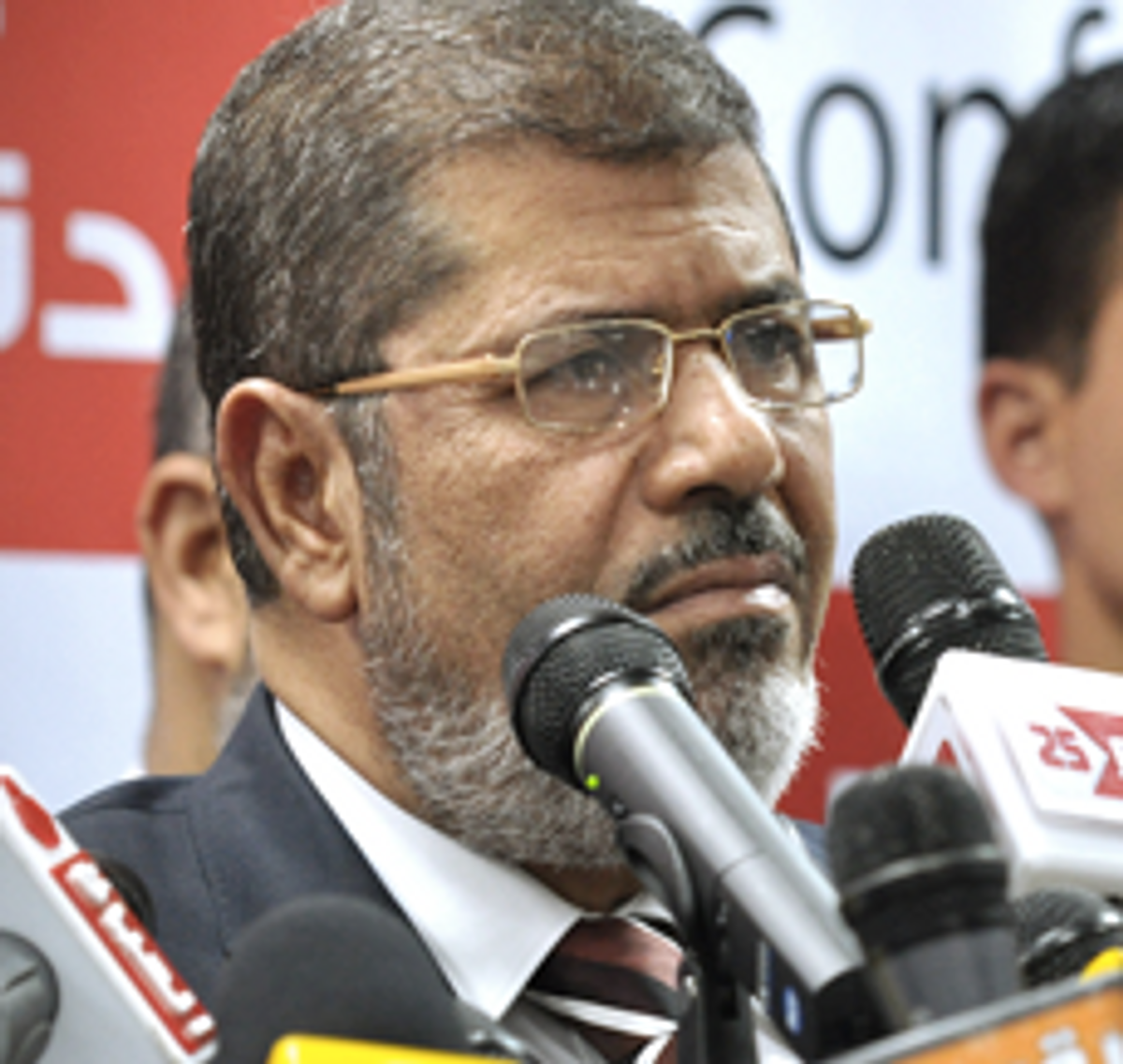 CAIRO — Thousands of supporters and opponents of Egypt's new Islamist president clashed in Cairo's Tahrir Square on Friday in the first such violence since Mohammed Morsi took office more than three months ago, as liberal and secular activists erupted with anger accusing the Muslim Brotherhood of trying to take over the country.

The two sides hurled stones and chunks of concrete and beat each other for sticks for several hours, leaving more than 100 injured, according to the state news agency. Two buses used by the Brotherhood to bring in supporters were set aflame behind the Egyptian Museum, the repository of the country's pharaonic antiquities, in scenes reminiscent of last year's clashes between protesters against the regime of then-leader Hosni Mubarak and his backers.

The melee erupted between two competing rallies in Tahrir. One was by liberal and secular activists to criticize Morsi's failure to achieve promises he had made for first 100 days in power, the other had been called by Morsi's Muslim Brotherhood.

The clashes come as criticism among leftists, liberals and secularists against Morsi has been growing since he was inaugurated more than three months ago as Egypt's first freely elected president. His opponents accuse Morsi, the Brotherhood and other Islamists of trying to impose their dominance and Islamize the state, including through the writing of a new constitution.

Some Egyptians are also frustrated that Morsi, a longtime Brotherhood figure, has not done more to resolve the multiple problems facing the country – from a faltering economy and fuel shortages to tenuous security and uncollected piles of garbage in the streets.

Morsi boasted earlier this week in a nationally televised speech that he had carried out much of what he had promised for his first 100 days, and his supporters say he needs time in the face of overwhelming difficulties inherited from Mubarak's authoritarian and corruption-riddled rule.

One anti-Brotherhood protester in Tahrir, Abdullah Waleed, said he had voted for Morsi in this year's election to prevent his opponent – a longtime Mubarak loyalist – from winning.

"Now I regret it because they are just two faces of the same coin," Waleed said. "Morsi has done nothing for the revolution. I want to say I am so sorry for bringing in another repressive regime."

Liberal and leftist groups had called Friday's protest to demand accountability and more action from Morsi after his first 100 days in office. The liberals also want greater diversity on the panel tasked with writing Egypt's new constitution, which is packed with Islamists, including Brotherhood members.

The Brotherhood called for a separate rally to denounce the acquittals earlier this week of 24 former senior figures from Mubarak's regime who had been accused of organizing a deadly attack on protesters during last year's Jan. 25-Feb. 11 wave of protests that led to Mubarak's ouster. The Brotherhood rally was to call for judicial reforms and to support a move by Morsi on Thursday to remove the prosecutor-general, who has been widely criticized for preparing shoddy cases against Mubarak-era politicians and police. Buses organized by the Brotherhood had brought in supporters from the provinces for the rally.

But the secular camp accused the Brotherhood of holding the gathering to distract from their anti-Morsi protest.

The violence erupted when Morsi supporters stormed a stage set up by the rival camp, angered by chants they perceived as insults to the president. The Islamist backers smashed loudspeakers and tore the wooden stage down, witnesses said.

A melee ensued and more supporters of the liberal-secular rally began arriving at the square. Young men from both sides tore up chunks of concrete and paving stones to hurl, others hit each other with sticks. Gunshots were heard. Youths making V-for-victory signs with their hands set fire to two empty buses of the Brotherhood.

"My conclusion here is that Morsi is just the president of the Brotherhood, that's all. We are back to square one," since Mubarak's fall, said Sayed al-Hawari, who carried a plank of wood as a shield against the volleys of stones.

A leftist protester, Rania Mohsen, said, "We are here against turning the state to a Brotherhood state ... We do not want to replace the old regime with a new like the old one."

A Morsi supporter, in turn, accused the other camp of being "thugs" who chanted against the leader of the Brotherhood and harassed the Islamists during noon prayers in Tahrir.

"We have to give Morsi a chance," 19-year-old Moez Naggar, said. "The more protests we have, the less we can expect from him."

A schoolteacher who said he belongs to the Brotherhood expressed dismay over the violence, saying he was surprised by the other camp's anger at Morsi. Sherif Mahmoud pointed to Morsi's attempt to remove the prosecutor-general, who many across the ideological spectrum have said should be sacked.

"The prosecutor general is a corrupt man," Mahmoud said. "The president is moving step by step."

Around nightfall, fighting stopped as the Brotherhood supporters left the square in buses.

Rashad Bayoumi, deputy leader of the Muslim Brotherhood, told The Associated Press that the scene around Tahrir Square "is something everyone is ashamed of." He said Brotherhood members did not take part in the clashes and that the group was there simply to demand judicial independence.

"The good of the country must come before personal good," he said. "The Brotherhood does not make decisions based on a few individual opinions, but every move is studied and understood in full first."

"This is not our way," he said, referring to the clashes that took place.

Morsi was in Egypt's second largest city, Alexandria, where he pledged on Friday that former regime figures would be brought to justice despite Wednesday's verdicts.

The 24 were acquitted of organizing the so-called "Camel Battle," an incident on Feb. 2, 2011, when a crowd of Mubarak supporters -- including assailants on horses and camels -- attacked protesters holding a sit-in in Tahrir to demand his ouster. Two days of fighting ensued, leaving nearly a dozen dead.

"All of the segments of Egypt's society were deprived of many rights" under Mubarak, Morsi told a crowd of supporters. "And the biggest right deprived of us was the right to freedom."

Following the acquittals, Morsi on Thursday moved to dismiss the country's Mubarak-appointed prosecutor general by moving him to the position of ambassador to the Vatican. However, the prosecutor, Abdel-Maguid Mahmoud, refused to step down and vowed to remain in his post, citing a law that protects the prosecutor general from being ousted by the president.

Many blame the prosecutor for frequent acquittals of police and Mubarak-era officials over the past year, saying he put together shoddy cases. Egyptians were also disappointed in what they saw as a weak verdict in the trial against Mubarak. He is serving a life sentence for failing to stop the killing of protesters last year, but prosecutors did not prove he ordered killings and he was cleared of corruption charges.