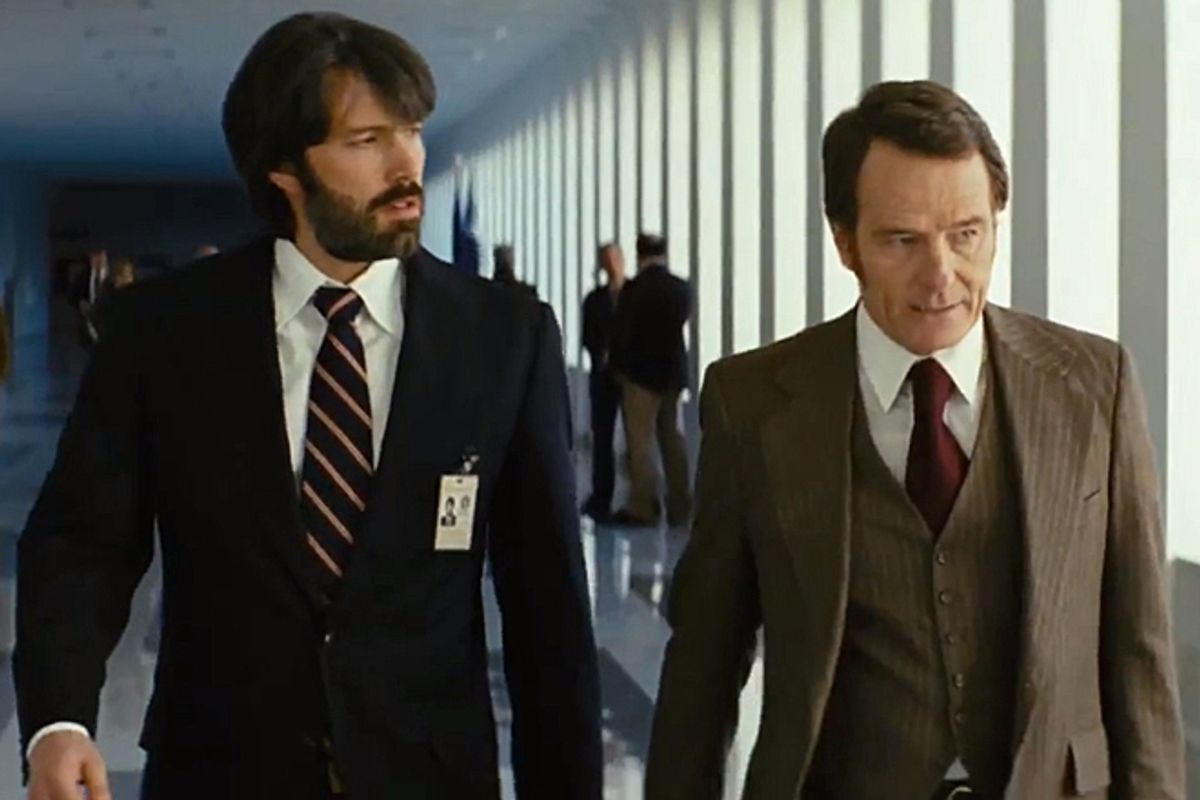 Mitt Romney’s supporters have long sought to cast this year’s presidential campaign as a rerun of the history-making 1980 election, in which a charismatic Republican with impressively shellacked hair won a landslide victory over a Democratic incumbent who was perceived as listless and overwhelmed by events. It’s a loose parallel, at best — although even the most ardent Democrat must admit that it looks more compelling now than it did two weeks ago.

Most notably, Ronald Reagan had already become a beloved avatar of the right by 1980. He was a standard-bearer for lower taxes and smaller government, and a symbol of nostalgic Americanism who had stood up to eco-freaks and student radicals as California's governor. Even those conservatives who are most excited by Romney’s debate performance in Denver and his recent surge in the polls know in their hearts that he’s a human sand castle, reshaped by every incoming tide, who lacks clear convictions of any kind (unless you want to describe a preening sense of superiority as a core belief).

But however you want to define the similarities and differences between 1980 and 2012, there’s a tenacious and insidious skein of history that connects the two: the question of Iran, especially how to understand the divisions inside its post-revolutionary society and its ambivalent, semi-belligerent attitude toward the West. I know one runs the risk of being called an America-hater for offering the radical idea that history has moral consequences. But of all the conundrums our country faces in the Middle East -- the Israeli-Palestinian question, al-Qaida, Iraq, Afghanistan, Syria, Libya and so on — Iran is the one where we most demonstrably sowed the whirlwind and have gotten to reap it over and over again.

The 1980 presidential election was an overdetermined event, to use historical lingo, shaped most of all by the Iranian hostage crisis, without a doubt the biggest and most demoralizing American foreign-policy debacle between the Vietnam War and 9/11. In November of 1979, a group of Islamic student radicals — acting independently, at least at first, from Iran’s unstable post-revolutionary government of the time — overran the United States embassy in Tehran and took 66 Americans hostage. The last 14 months of Jimmy Carter’s White House term were all but devoured by attempts to bring them home, either through negotiations or by force. In a peculiar symbolic act that remains difficult to decode all these years later, the final 52 hostages were not released until the afternoon of Reagan’s inauguration, 444 days later.

While the public initially rallied around Carter’s air of dignified outrage and decency, the long, slow grind of bad news and public humiliation — Ted Koppel’s long-running ABC News show “Nightline” got its start as a nightly report on the hostage crisis — eventually made him look wimpy and spineless. (I can remember seeing a homemade banner hanging outside a working-class bar in Baltimore that showed the Ayatollah Khomeini with a nuclear bomb being shoved up his butt and the legend: “Mr. President — how long?”) If Ben Affleck’s skillful new thriller “Argo” is first and foremost a Hollywood movie designed to thrill audiences and make Americans feel slightly better about that whole dreadful episode, one of its ancillary agenda items is to burnish Carter’s Iran-crisis reputation, if only a little and long after the fact. (If you want to avoid any and all spoilers about the end of “Argo,” this is your chance.)

Anyone who was alive and sentient in April of 1980 remembers Operation Eagle Claw, the disastrous U.S. military raid intended to rescue the hostages that ended with two helicopter crashes and eight dead servicemen. Affleck’s film shines a light on an improbable and far more successful CIA operation that was personally approved by Carter a few months earlier, resulting in the rescue of six Americans who had escaped from the embassy and been sheltered in secret by Canadian ambassador Ken Taylor. In fact, Carter himself makes a surprise appearance in voiceover over the movie’s closing credits, wistfully recalling that he would have loved to have taken credit for the “Canadian caper,” but that he couldn’t make the CIA’s role public without endangering the remaining hostages in Tehran. He doesn’t quite say, “If you had known I had actually done something, would you have re-elected me?” but you can pretty much hear him think it.

Affleck unquestionably overemphasizes the cloak-and-dagger aspects of the story, along with the limited role of CIA “exfiltration” expert Tony Mendez, whom he plays in “Argo”; to this day, Ken Taylor maintains that the Canadians could have gotten the six Americans out of Iran without Mendez or his elaborate Hollywood cover story. As to the politically loaded question of Jimmy Carter’s Iran-related competence, or lack thereof, I think it’s fair to say that the answer remains cloudy, even 30-odd years down the line. As historian Gaddis Smith puts it, Carter “inherited an impossible situation – and he and his advisers made the worst of it.”

There can be no doubt that during the prelude to the Iranian revolution, the Carter administration’s messaging was, at best, highly unfortunate. Carter paid a disastrous state visit to Iran at the end of 1977, just as anti-American and pro-Islamic resistance to the authoritarian regime of Shah Mohammed Reza Pahlavi was heating up. In a now infamous toast, the president praised the Shah as a beloved leader and his country as an “island of stability” in the Middle East. Neither thing was remotely true, as the president must have known, and to many ordinary Iranians, Carter came off as both clueless and insulting.

When the Shah’s government began to crumble a year or so later, Carter had to pick between competing unsavory options: Support the ailing monarch in a violent crackdown against dissent, which might not work, or form alliances with the opposition, without knowing what a new government might look like. He chose to stand back and allow events to unfold on the ground, which didn’t turn out to be a good choice either. After the Shah was forced into exile (supposedly aboard a jet loaded with tons of gold bullion) and was found to be critically ill with cancer, Carter’s cabinet reluctantly agreed to admit him to the U.S. for treatment at the Mayo Clinic. According to then–Vice President Walter Mondale, Carter wondered aloud at that meeting whether the Tehran embassy would be attacked in reprisal, as it had been once before. That was exactly what happened, although it seems likely that the Iranian students only used the deposed ruler as a pretext. The Shah, who shouldn’t have been high on anybody’s humanitarian list in the first place, died the following year anyway.

If much of that history sounds oddly familiar, that’s because President Obama faced a strikingly similar set of choices when the autocratic, sorta-kinda-pro-Western government of Egyptian president Hosni Mubarak began to collapse during the Arab Spring of 2010 and 2011. You can certainly find foreign-policy hawks who grumble that Obama “lost Egypt” to the Islamists – that’s a major line of attack in Dinesh D’Souza’s documentary “2016: Obama’s America” — but we can provisionally say that the president acted in decisive and principled fashion in that case, and that the results look OK so far.

Of course the Romney-Ryan campaign is eager to paint Obama as a pantywaist pinko appeaser and pseudo-Muslim; they still seem hopeful that the murder of the U.S. ambassador in Libya, along with the slow-burning question of Iran’s nuclear buildup, will stick to him the way the hostages stuck to Carter. But even if Romney wins the election, that won’t be why. Foreign policy arguably should be a major topic in this campaign, but it really hasn’t been, and isn’t likely to help the GOP ticket anyway. Romney’s strategists understand that a guy with absolutely zero foreign-policy experience who couldn’t handle a tourist visit to London without making an ass of himself isn’t the right conduit for a whole lot of saber-rattling and machismo.

In any case, Obama and Romney aren’t far apart on the issue of Iran’s nukes, which so far remain somewhere between imaginary and theoretical. Both of them have to pay obeisance to our strange relationship with Israel, and both of them threaten sanctions and try to draw a line in the sand without specifying exactly where it is. Meanwhile, everyone involved understands that American and Israeli hostility, and the nearly constant threat of war over the past several years, have only helped to consolidate the power of loony-tunes president Mahmoud Ahmadinejad (who is mostly a figurehead) and the Shiite mullahs within Iran, a complex and class-divided society of 75 million people, most of whom would prefer a more normal relationship with the world.

None of which, by the way, is anything new: Khomeini used the nationalist and religious fervor that surrounded the hostage taking of 1979 to push through his theocratic constitution, and then to purge moderates and leftists from the revolutionary coalition. I think it’s clear, in fact, that the wacko regime in Tehran and the right-wingers in both Israel and the U.S. have become mutually dependent on each other over the years, even as they’re supposedly committed to each other’s destruction, rather like Wile E. Coyote and the Roadrunner. The fact that the Reagan administration actually sold arms to Iran — by way of Israel! — as part of the most confusing political scandal in history is only the most vivid illustration of that interdependence.

Furthermore, this whole tormented history — the Shah’s secret police, the Iranian revolution, the hostages, Iran-contra and the current shadowplay around Iran’s nuclear program — is loaded with ancient Cold War blowback, just like so many other messed-up things around the world. As a voiceover preface to “Argo” spells out, the CIA and British intelligence overthrew democratically elected Iranian prime minister Mohammad Mosaddegh in a 1953 coup, mainly because he had nationalized the country’s oil industry and was perceived, perhaps wrongly, as friendly with the Communists. Maybe you want to argue that history would have gone in an even worse direction if Mosaddegh had been left alone or that all that is old news and the Iranians need to get over it. But beyond its highly entertaining account of a historical footnote, Affleck’s movie reminds us that Iran and America have been locked in an abusive relationship ever since, with all of us kids suffering the consequences.