Gary Johnson: Mitt is "without one molecule of brain" 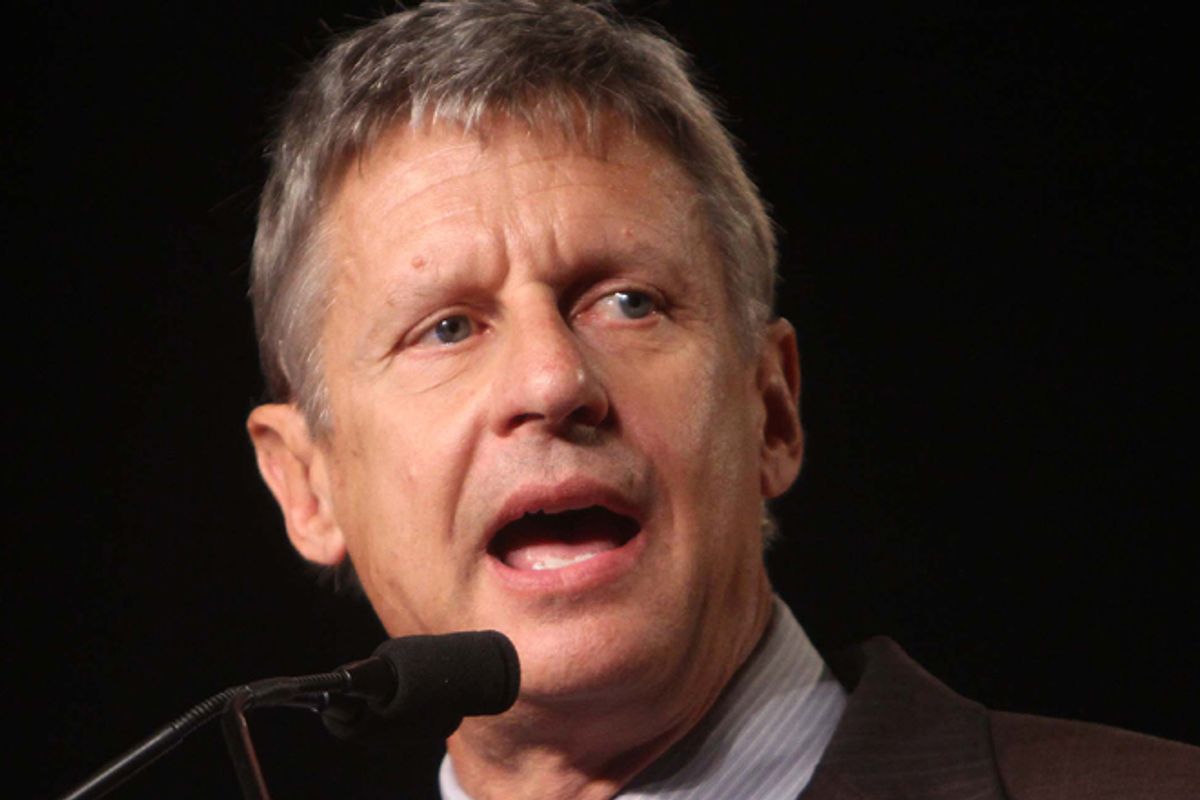 Gary Johnson served eight years as the Republican governor of New Mexico, where he endeared himself to libertarians by vetoing hundreds of bills that conflicted with his small-government worldview. An avid extreme sports enthusiast, he’s climbed Mount Everest and run Ironman triathlons since leaving office in 2003, while also becoming one of the country’s most outspoken voices against the drug war.

This year, he ran for the Republican presidential nomination, but was shut out of all but one debate. So he left the party and ran for and won the Libertarian Party’s nomination, on whose ticket he is now running  the most visible third-party candidacy of the year. He spoke with Salon for the second installment of our Better Know a Lesser-Known Candidate series. This conversation has been lightly edited for brevity.

We’re in debate season. You’re not on the stage, but what might we hear from you if you were?

Well, I would not bomb Iran. I would get out of Afghanistan tomorrow, bring the troops home. I believe that marriage equality is a constitutionally guaranteed right. I would end the drug wars. I would advocate legalizing marijuana now. I would have never signed the Patriot Act. I would have never signed the National Defense Authorization Act allowing for arrests and detainment of you and me as U.S. citizens without being charged. I believe we need to balance the federal budget now and that means a $1.4 trillion reduction in federal spending now. When it comes to jobs, I’m advocating eliminating income tax, corporate tax, abolishing the IRS, and replacing all of that with one federal consumption tax. In this case, I am embracing the FairTax. I think that that’s really the answer when it comes to American jobs. In a zero corporate tax rate environment, if the private sector doesn’t create tens of millions of jobs, then I don’t know what it takes to create tens of millions of jobs.

So I think big differences between me and these two guys [Obama and Romney]: They’re on stage debating who’s going to spend more money on Medicare when we have to slash Medicare spending or we’re going to find ourselves with no health care at all for those over 65. And Medicare, very quickly, is a benefit that we put $30,000 in and get $100,000 out. It’s not sustainable and it has to be addressed. None of this is sustainable. None of it. I think we all recognize that we’re in deep trouble and we’re going to need to make some mutual sacrifices on all of our parts. But I just saw the whole debate thing as head in the sand, Santa Claus, Easter Bunny, Tooth Fairy -- they’re all coming, don’t worry.

So how’s the campaign going over all? I saw a Reason poll that said you might get as much as 6 percent. Is that what you’re expecting?

We’re not expecting anything. But when you see something like that, and we saw that, holy cow! Do you hear my name every six times you hear Obama’s name 45 times? That would be the polling numbers and it’s no way. It’s not even remotely close! You hear my name one time every 5,000 times you hear Obama or Romney’s name. So the point is we’re doing really really well given a very small amount of resources. It’s like the most underreported 6 percent in my lifetime. If I were just given credit for where I’m at right now, which is mention my name 6 times every time Obama or Romney’s names are mentioned every 45 times, you know what, Alex, I’m going to suggest that I wouldn’t be at 6. I’d be at 11, 18 -- I might even be the next president of the United States if people were actually checking out who I am!

What do you see as the big goal of your campaign? Are you in it to win? Or raise certain issues? Or kind of carve out a path for third-party candidates in general? What’s the long-term impact you’d like to have?

So how do your run in light of other third-party candidacies? Ross Perot, Ralph Nader -- do you see yourself in that line or is this a new model?

If I were in that line I think I would be receiving far far more attention than I am right now. So if it ends up to be on par with them statistically, then this is really one big gigantic overlooked story. And the story I come back to would be the truth. That we’re in deep deep trouble, which we all recognize, and yet we’ve got a debate that’s really not a debate at all. It’s just more of the same. It’s head in the sand. It’s just crazy, in my opinion.

What keeps you going with the odds stacked against you. What motivates you everyday, personally, to continue the campaign?

It’s that at the end of the day I get to go home and I have a sense that what I’m doing is the right thing. Someone’s got to be out there talking about solutions that go with these problems we have, and I’m going to argue that neither one of them is talking about the solutions at all.

You mentioned your support for legalizing marijuana. It’s on the ballot in three states this year, what do you think the chances are of those ballot measures succeeding? And what’s the prospect for it in the long run?

I think the tipping point is going to be in Colorado. Colorado gets it. Six years ago, Denver voted to decriminalize marijuana on a campaign based on marijuana being safer than alcohol.  I see Colorado as being the first of 50 state dominoes that fall. And look, in the six years since Denver decriminalized, there’s been no incidents whatsoever. None! That’s going to be the case when it comes to legalizing marijuana. The sky’s not going to fall. Police will actually go out and enforce real crime as opposed to non-violent victimless crime. We’re going to all see that and by extension we’re going to move ahead with drug reform, which basically looks at the issue as a public health issue instead of a criminal justice issue.

On the marijuana issue, Obama admitted in his autobiography to smoking marijuana as a youth and promised not to crack down on medical marijuana when he came into office, but he’s actually become one of the worst presidents ever on that issue. Do you think he’s losing votes to you, or others, because of that?

He should. He should lose all of his votes just based on that. And forget about the issue as much as just going back on his promise. He promised he would not raid medical marijuana facilities in states where legislatures or citizens voted to implement those programs. But he’s cracking down on medical marijuana in California and Colorado. 180 degrees from what he promised!