Is "The New Normal's" Ellen Barkin a female Archie Bunker? 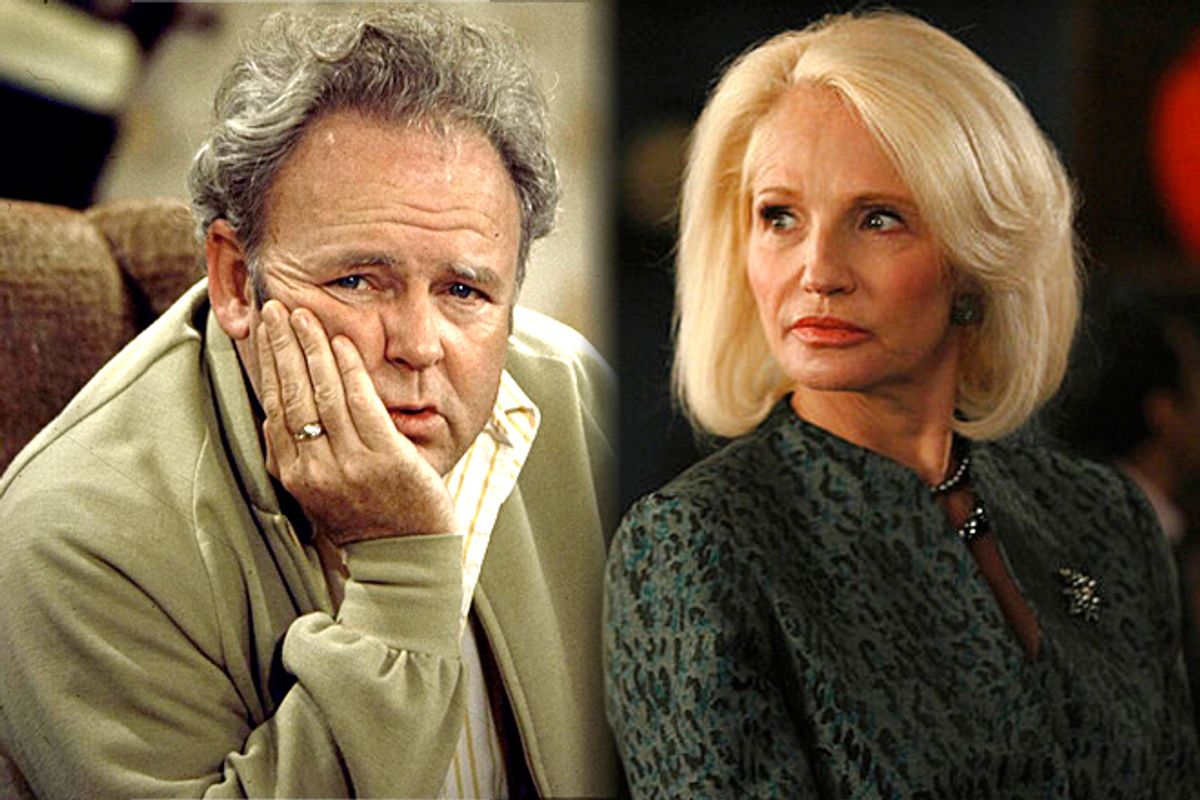 On Jan. 12, 1971, Norman Lear premiered “All in the Family,” the sitcom that would launch an empire of shows soaked in the key social issues of the day — integration, feminism and patriotism — and establish Lear as the preeminent and pioneering voice of the modern television era. Anchored in working-class Queens, Archie Bunker reigned as the racist and sexist patriarch spewing anti-Semitic, anti-Polish, anti-woman venom that sadly mirrored the misguided indoctrination of many white male Americans like himself.

And while we’ve enjoyed some great sitcoms over the last 40 years, it’s been a while since one regularly used our funny bones to engage our intellects. We’ve seen Jon Stewart do this rather well, and “Saturday Night Live” still has its moments, but the sitcom, even groundbreaking ones like “Will and Grace” and “Modern Family,” have only pushed so far. Ryan Murphy has gone retro with his freshman sitcom, “The New Normal,” channeling the ghost of great television past to create what may well be the “All in the Family” of our time.

Just as Archie Bunker clashed with the newer ideals of his daughter Gloria’s husband, Mike, whom he called “Meathead,” gay couple Bryan (Andrew Rannells), a television producer, and David (Justin Bartha), a gynecologist, engage in a perennial culture war with their resident Archie, Ellen Barkin’s Jane Forrest, who is the Ohio-bred, Mitt Romney-supporting grandmother of their surrogate, Goldie (Georgia King).

“All in the Family,” which was modeled on the edgy 1960s British series “Til Death Us Do Part,”  debuted during an era of great social readjustment for the nation. The 1970s was a decade when the gains of the civil rights and feminist movements were being implemented and the Vietnam War was still being waged — half of the country supported it while many others actively protested it. Watergate was looming, Black Power was rising as the nation was literally in a state of transformation. And “All in the Family” immersed itself in this tumultuous time by pushing the envelope with shows that exposed racism and sexism as well as tackled abortion, rape and homosexuality. In its debut season, “All in the Family” arguably sparked the first national conversation on homosexuality through television. In just its fifth episode, Archie was forced to consider that his manly, former football player friend Steve might not be the heterosexual bachelor he believed and that episode unknowingly laid a foundation for a show like “The New Normal” so many decades later.

Following the lead of his idol Norman Lear today, Murphy has infused “The New Normal” with the pressing issues of our time, especially as it relates to challenging homophobic attitudes. That’s crystal clear in episode three or “Baby Clothes” when Bryan and David leave their Rodeo Drive preferred shopping zone to accompany Goldie to an outlet mall to buy new clothes for her 9-year-old daughter, Shania (a brilliant Bebe Wood), where homophobia rears its ugly head. An innocent and loving display of public affection between Bryan and David becomes confrontational when a man, shopping with his wife and kid, challenges them. “Don’t do that in front of my daughter,” he roars. “This is a family store and I shouldn’t have to go home and explain that to my kid,” he says.

Taken aback, Bryan calls the man out for his bigotry and chastises him for continuing the cycle with his own daughter. As forceful as Bryan is, he is clearly shaken by the man’s labeling of him and David starting a family of their own as “disgusting.” At home later, Bryan’s “come-to-parenthood” moment resonates far beyond gay parents. “That guy is not the problem,” he tells David. “We are the problem … We are bringing a baby into the world where idiot people feel free to say and do the things they say and do because we have been trained to ignore them,” he pouts. “But how are we supposed to protect our baby from hate?” he finally asks David.

It’s a question expecting Muslim American parents have undoubtedly asked themselves, especially since 9/11. And it’s definitely a question many expecting African-American parents must ask themselves in this Trayvon Martin/Barack Obama America. Therefore, Bryan and David’s “come-to-parenthood” moment resonates beyond a gay couple expecting their first child. Instead, it’s one that many marginalized groups have historically grappled with and continue to do so today in some form or another.

Personal politics isn’t the show’s only target. In step with the seesawing emotions that are abundant in this heated election year, “The New Normal” has also taken on the crowded minefield of politics. Re-creating the many conversations currently playing out in households across the nation, episode four, “Obama Mama,” which Murphy has publicly stated was inspired by Lear’s “All in the Family,” gets extremely high-fevered when Jane begins sharing her unpopular conservative views at a dinner party Bryan creates to prove to her that he has black friends when, to his shocking discovery, he has none.

The showdown is initiated when Jane charges at the couple for encouraging her granddaughter Goldie to vote Obama on her absentee ballot from critical battleground state Ohio. As the argument progresses, Jane accuses the two men of being hypocritical liberals who, despite their fervent support of Obama, have no black friends.

“Don’t you think it’s a little more racist to vote for a black man simply because he’s black?” she prods. “What about you two? I don’t imagine you’re lighting candles on Kwanzaa! Couple of hypocrites, like every other liberal. You walk the walk but you can’t talk the talk,” she stings.

Struggling with the guest list, semi-solved, Bryan hopes, by inviting his assistant Rocky (NeNe Leakes) who he assumes will bring her black friends, Bryan tells David, “Mrs. Forrest is right. We are phony liberal frauds. We are racists.” David comfortingly disagrees. “We can’t be. We are two educated, successful, enlightened gay men,” he insists.

While Bryan and David are not racists, the realization that even a gay couple can fall short of their own liberal ideals forces us all to scratch beyond our Benetton facades. Emotions really rise at the dinner table (in a scene some have likened to “The Draft Dodger” episode seven from the 1976 season of “All in the Family”) when Jane mercilessly spews her Republican views after a dinner guest suggests that all Americans should be entitled to affordable healthcare.

“I just don’t want the federal government making decisions that are my choice to make,” she retorts. “The whole system is broke, and your Obama just wants to keep dumping more money into it. It’s like giving penicillin to a Kardashian! Too little, too late,” she zings.

By the end of the episode, Bryan and David have attended a mock election at Shania’s school where there’s promise of a budding friendship with an interracial couple composed of a black man and an Asian woman. Unbeknownst to Bryan and David, the couple had put “making gay friends” on their to-do list. The larger point, however, is that we must all make an effort to step outside our individual comfort zones if we are to truly create a more diverse nation.

Things return to the cross-section of personal and political in the “Bryanzilla” episode when Bryan goes overboard with Shania’s pretend wedding. Reflecting on his and David’s courtship back when J.Lo and Ben Affleck and Madonna and Guy Ritchie were still couples and the government’s sanctioning of gay marriage was as likely as getting hit by a meteor, Bryan recalls his and David’s gay marriage conversation. “Marriage for guys like us, it’s a fantasy,” David tells Bryan. “Gay people can have fabulous commitment ceremonies but until it’s sanctioned by the U.S. government it’s nothing more than playing house.”

As dreams of his own marriage dance in his head under the guise of helping Shania, of course, Jane is once again a dream killer. Livid over her invite to Shania’s pretend wedding, Jane shows up to Bryan and David’s home enraged and calls Bryan out. “That’s what these gays do; they pretend you can define what marriage is,” she says to Goldie, as she defends the innocence of her daughter’s ceremony. It gets even more intense when Bryan proclaims his and David’s intent to marry and David doesn’t back him up.

Later, after sabotaging Shania’s pretend wedding, Nana defends herself by insisting that she wants Shania to respect marriage and that she and Goldie, with their failed marriages, have set poor examples. Interestingly, Nana revealed earlier in the series her discovery that her own husband, Goldie’s grandfather, was gay. Despite Nana’s attack on gay marriage, the episode ends with a once gay marriage-shy David romantically proposing to Bryan as the ultrasound reveals the outline of their baby.

While the episode is touching, its effect is bittersweet. On the one hand, it affirms the right of all Americans, regardless of sexual orientation, to marry but also upholds the traditional belief that children can only be born to married parents, thus reinforcing that all families should begin as legally sanctioned married units.

But the point of “The New Normal” is not just about picking sides. Like “All in the Family” before it, the dialogue is just as important as the outcome. For all her GOP heavy-handedness, Jane’s saving grace is that she loves Goldie and Shania, just as Archie’s was that he loved Edith and his daughter Gloria. By dunking Bryan and David into Jane’s Republican whirlpool, viewers can understand what they are up against and, most important, the role each of us plays in that.

Ronda Racha Penrice, author of "African American History For Dummies," has tackled issues of race, culture and television for over a decade. Feel free to engage her on Twitter, @rondaracha.